What is Primitivo wine?

There is no mistaking a glass of ripe, powerfully scented Primitivo. How would we describe its signature aroma and flavor? Well, the best analogy would be jumping headfirst into a saucepan of freshly made blackberry and plum jam. Primitivo is many things, but it is rarely understated. This grape is about delivering pleasure – glorious, untamed, hedonistic pleasure. Its immense concentration of warm berry flavors and velvety tannins are irresistible, mainly if your gastronomic preferences involve red meat. Naysayers would deride Primitivo as unsubtle or unsophisticated – they may have the ghost of a point. But there is no denying the grape’s enormous appeal. 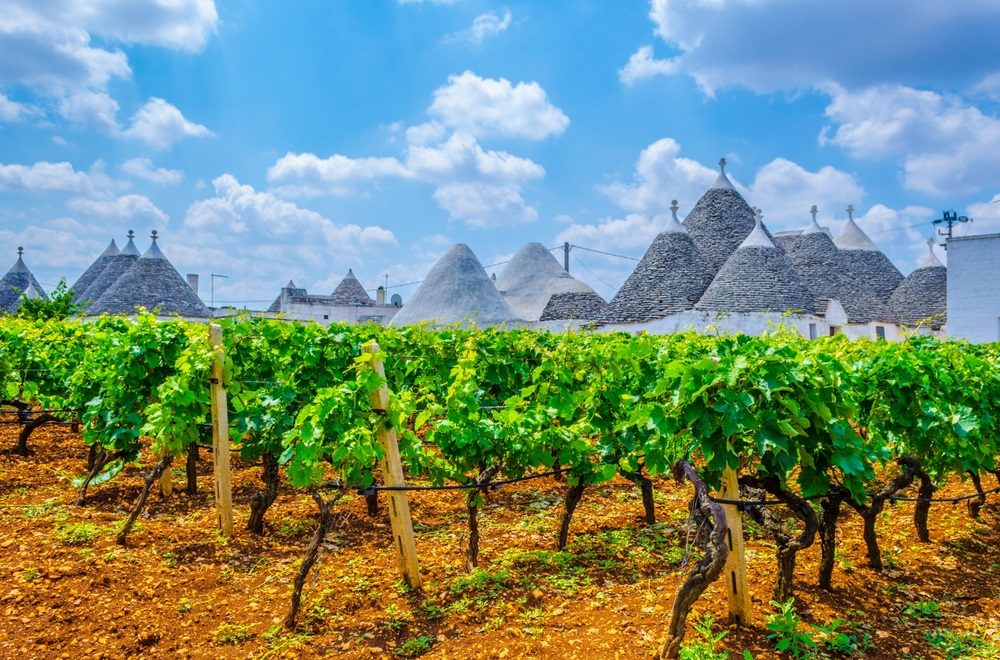 Unlike the best wines of Bordeaux and Barolo, Primitivo is always ready to drink, and you can taste it for yourself on a Private Luxury Puglia Wine Tour.

For this reason, Primitivo has many acolytes and adoring fans. However, many of its most enthusiastic supporters would never refer to the grape by its Italian name. In California, Primitivo is known as Zinfandel. Same grape, different synonym. It was regarded as California’s signature export for a century, until it was proven that, as Primitivo, it had been grown in Italy since the 1700s. Once again, the miracle of science and DNA sequencing had unlocked a great mystery of the viticultural world. An extensive DNA analysis discovered that Primitivo owes its origins to Croatia. It is widely agreed that Primitivo is a mutation of one of the indigenous varieties native to Croatia, introduced to southern Italy in the 18th century. According to legend, Don Francesco Filippo Indellicati planted some cuttings in the district of Li Ponti, in Puglia. It subsequently promulgated across the region, becoming one of Italy’s most prolific grape varieties by the 19th century. It was as common a sight as olive groves and coastal sunsets. However, its destiny and role in Puglian wine culture have changed a lot over the past 20 years.

Historically, the wilds of Puglia were not associated with high-quality wine. Quite the opposite, in fact: the ‘heel’ of Italy was dedicated to producing large volumes of bulk wine. Gargantuan truckloads of alcoholic, fiercely tannic wines were sent to central and northern Italy, used to add color and structure in rain-soaked vintages across Tuscany and Piemonte regions. Puglia became synonymous with providing cheap blending material – a reputation that, unfortunately, still doggedly persists in some quarters.

But if contemporary attitudes are more important to you than past mistakes, then Puglia is worth a second look. The area’s wine scene has changed beyond all recognition in recent times; generous EU grants encouraged growers to pull up low-quality vines, which led to a much-needed reduction in the region’s output. Younger growers are increasingly focused on quality rather than quantity. They have an impressive array of raw materials at their disposal: a complex tapestry of soils and microclimates, imported expertise, and old bush vines, yielding tiny berries of concentrated fruit. There are no obstacles in Puglia to making exceptional wine.

Of course, some of the region’s output is still blending material for the north of Italy. The demand for Vermouth, grape concentrate, and sweetened blending material ensures that this market will never die out. However, the proportion of Puglian wine made expressly for discerning palates has increased dramatically since the turn of the Millennium. The cultivation and production of the Primitivo grape have been at the forefront of this revolution.

What’s in a name?

The name Primitivo means “early one” in Italian, a reference to the grape’s tendency to ripen relatively early on in the growing season. Some local growers dryly refer to Primitivo as “Mirr Test” (hard wine). They should know – generations of Puglian families have been growing this difficult variety for centuries. It provides much pleasure in your glass, but also a panoply of challenges in the vineyard.

Indeed, success with Primitivo does not come easy. Much will depend on the suitability of terroir and vagaries of the climate. If Primitivo is planted on fertile soils at low levels of altitude, then the results aren’t pretty. The variety is minded to produce massive yields unless its natural vigor is constantly kept in check. Yet, the vine also ripens unevenly and is prone to rot in wetter years. Conversely, in hotter vintages, Primitivo can ripen with a potential alcohol level of above 17% ABV. These “alcoholic monsters” and “fruit bombs” have long been derided by sommeliers and critics for their harsh structure and unwieldy alcohol. 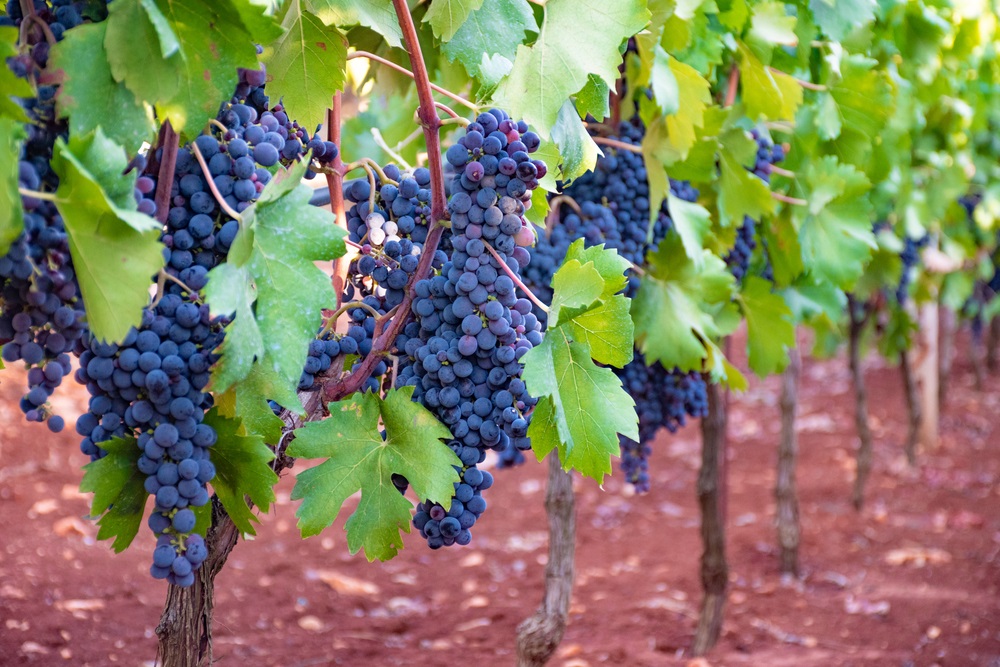 However, if the conditions are right, then Primitivo can produce utterly beguiling wine. The trick is to discover cooler sites in warm climates, particularly terroirs which benefit from a high degree of diurnal temperature variation. The grape also responds well to Puglia’s iron-rich terroirs, finding an affinity with clay and sandy soils. The former has a competitive edge in hotter years due to its natural porosity. If the winegrower is religious about maintaining a low yield, then Puglian Primitivo can be among Italy’s finest and long-lived wines.

Contemporary versions of Primitivo from this corner of Italy can (roughly) be divided into two distinct camps. Some growers aim for a fruit-forward, easy-drinking style to be consumed at a relatively young age. The style’s soft texture and accessible tannins have found a welcome audience with visitors to this gloriously unspoiled part of Italy. The fruit profile of young Primitivo is bound to give pleasure: blackberries, fig, and often strawberry intermixes with notes of pepper and spice. The wine is ideal with roasted and grilled meat, particularly charcoal-seared steaks and cuts of lamb.

Alternatively, individual producers wish to distance Puglian Primitivo from its “sunshine in a bottle” connotation. They will work hard – often employing ancient bush vines and new America oak – to craft a structured, complex, and age-worthy expression of this noble grape. In its youth, the charms will not flow as easily. You should expect a more savory and tannic style, which will require a few years to open up. What emerges, however, more than justifies your patience. The concentrated black fruit will be tamed with sophisticated tannins, savory notes of forest floor, and a most appealing freshness. At its best, Primitivo does not play second fiddle to esteemed grapes like Sangiovese and Nebbiolo. It operates in the same class.

Today, there are three key sub-zones in Puglia which produce exceptional Primitivo wines. The most important appellation is the Primitivo di Manduria DOC, which was created in 1974. It is one of the region’s oldest, currently home to approximately 900 hectares of vineyards. A good number of delicious fortified and sweet wine styles are also made in the zone, although the dry Primitivo wines have caught the eye of export markets. The Gioia del Colle region further north has also shown great promise in recent years. Better site selection and more sophisticated winemaking have proven that ‘Italian Zinfandel’ can rival Californian versions in the quality stakes.

The most exciting developments are happening on the flat Salento peninsula, which has been Puglia’s leading vineyard for decades. Curiously, there are no significant variations in exposition and mesoclimates, yet the best terroir is considered exceptional. This is due to the region’s USP; vines benefit enormously from the cooling winds that blow off both the Adriatic and Ionian seas. Thanks to a combination of improved viticulture and the significant moderating effects of these sea breezes, fine wine can now be produced here. The best sites are situated in western Salento, located close to the coastal areas and at slightly higher altitudes. If the winemaker is a professional, then the results should be memorable. Judicious aging in American oak flatters top-quality Primitivo, imbuing the wine with added dimensions of flavor and structure.

Yet even premium terroir and brilliant winemaking cannot guarantee world-class Primitivo in the majestic landscape of Puglia. As elsewhere, global warming has cast a pernicious gaze on these vineyards; keeping the alcohol at balanced levels can increasingly be an onerous task, worsened by rising temperatures. Inflated yields and harsh tannins also remain a constant headache. Primitivo asks much of the winegrower and can sometimes disappoint. But in the right hands (and aided by a favorable growing season), it can produce incomparable, voluptuous magic.