Italians of all stripes owe the Piedmontese a debt of gratitude. Not only is this spectacular region responsible for the creation of the Slow Food Movement, but it is also the birthplace of the aperitivo. Far better than the Colosseum, Vatican, or even the Sistine Chapel, this evening ritual of sipping pre-dinner drinks represents everything glorious about Italy’s utterly civilized food and drink culture.

It all started (or so the legend goes) back in the 19th century. It is said that a bored distiller, Antonio Benedetto Carpano, accidentally stumbled upon a recipe for aromatized wine. The beverage is stabilized with brandy and then aromatized by the slow infusion of herbs and spices into the alcohol. He called it Vermouth; there have been countless arguments between the French and Italians about the origins of Vermouth since time immemorial. However, it is widely accepted that sweet Vermouth originated in Italy, while dry Vermouth is a Francophile invention.

You can explore Italy’s food and wines with Cellar Tours on a private Luxury Gourmet Vacation, dine in the best local restaurants, and enjoy VIP tastings in the top wineries. 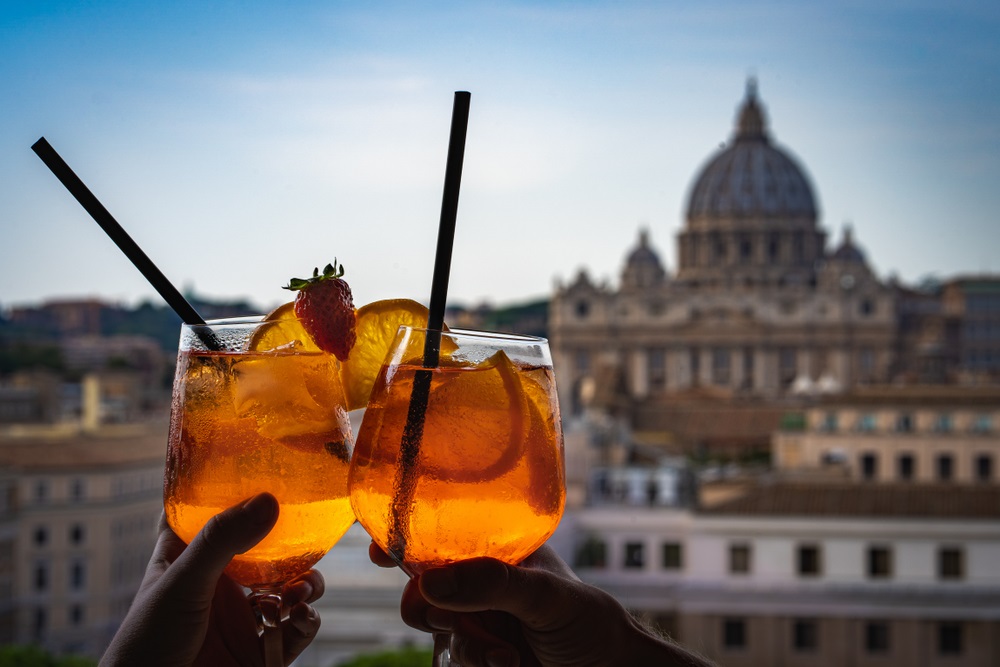 The rise of the tradition

Of course, without a good and influential publicist, Vermouth would never transform into the global phenomenon it is today. Luckily, the Italian monarchy was on hand to do just that. Born in the city of Turin, King Vittorio Emanuele became the first king of a united Italy in the 19th century. Emanuele was reportedly very fond of this new drink, ensuring that the aristocracy quickly adopted Vermouth as their pre-dinner tipple of choice. As a result, the tradition of enjoying a libation before the evening meal (cena) spread across Italy like wildfire, touching every corner of the peninsula. This low-alcohol fortified wine played a multitude of roles: it stimulated the appetite, quenched your thirst, and encouraged lively debate and conversation. It is said that the great intellectuals, authors, and artists of the 19th century did their finest work after the aperitivo. Over the decades, other drinks entered the fold, and Vermouth lost its monopoly on the tradition. Nevertheless, it remains a popular standby for many Italians.

What exactly is the aperitivo?

The beauty of the concept is its simplicity. Aperitivo is a catch-all name for drinks (it’s rarely just one drink) taken before dinner, intended to whet your appetite. Commonly enjoyed among friends, no one would consider going out before 6:30 pm – the aperitivo ‘hour’ typically runs from about 7-9 pm in every city and region. It may go on for longer in summer, while winter can see people huddled around outside tables with heaters in the mid-afternoon. The nomenclature is derived from the Latin verb ‘aperire,’ meaning ‘to open.’ It draws obvious parallels with the French word ‘apéritif’ although the cultural connotations are quite different. The latter is merely associated with a single drink before dinner – the aperitivo is a major social affair, sometimes lasting for several hours.

The culinary art of the aperitivo

The other significant difference between the French and Italian traditione is the importance of food. Depending on the venue, patrons can be served anything from charcuterie (antipasti) and local cheeses with their drinks to a derisory bowl of peanuts. In addition, the Venetians snack on cicheti during the aperitivo, which runs the gamut from pizzette (mini pizzas) to marinated anchovies and salt cod. Traditionally, Italians rarely gorged on their pre-dinner snacks, as the aperitiivo was not designed to substitute for a leisurely meal.

However, the younger generation – and tourists – increasingly view the tradition as a budget-friendly alternative to dinner. In the larger cities, particularly at weekends and during seasonal holidays, businesses can offer extensive buffets of antipasti, pasta dishes, salads, and even hot dishes. All this can be accessed for the price of a single drink, although you may attract glares from the owner if you slowly sip a glass of Prosecco for two hours! 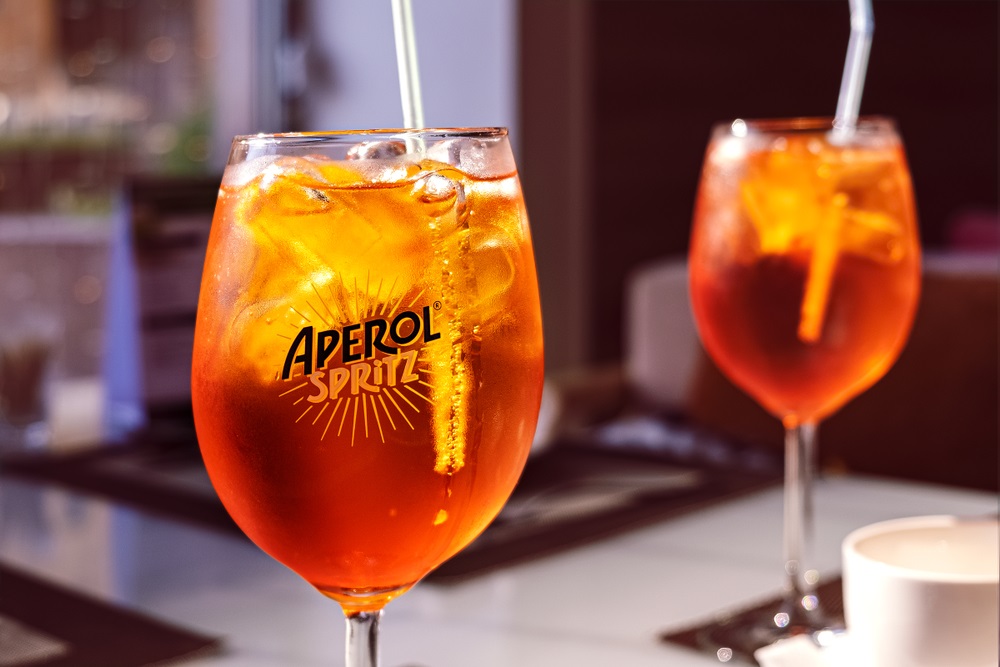 Almost every town and village in Italy will have at least one or two cafes/restaurants offering drinks and snacks before dinner; nevertheless, if you want to savor the electrifying buzz of Italians socializing in the late afternoon, head to the major cities. The range of aperitivo options is growing at an incredible rate – everything from rustic bars to glamorous rooftop destinations with prices to match. The following cities are the best places in Italy to enjoy this joyous pastime. Just be careful how your debts mount, as one drink is seldom enough.

The nation’s economic powerhouse is not such a stuffed shirt as southern Italians would have us believe. When the sun goes down, the Milanese like to party and celebrate the good things in life: food, fashion, and the legendary aperitivo. Indeed, the famous Italian liqueur Campari was invented in the Piedmont city of Novara, just west of Milan. This propelled Lombardy’s key city to the rank of aperitivo-capital of Europe in the 1800s. Then, entrepreneur Davide Campari opened Bar Camparino in Milan in the 20th century, complete with an automated soda water dispensary. The city has not looked back since.

Today, your aperitivo options are almost limitless. Wine and cocktail bars can be found on every street in the Navigli, Brera, and Corso Como districts and most serve aperitivos.

It is hardly surprising that the region credited with the creation of red Vermouth boasts a thriving aperitivo scene. Turin is the undisputed capital of aperitivo in Piedmont, with every evening dedicated to the obligatory aperitivo crawl. Head to Piazza Vittoria Veneto’s riverside area and the Quadrilatero Romano district. Up-and-coming Vanchiglia also has some enticing options. Turin is also the Italian capital of aperitivo buffets, turning a tradition on its head by embracing the concept of a full meal. Known as the apericena hour, these generous bar-side buffets are groaning under the weight of pasta, bowls of risotto, cheeses, and cured meats. Other venues prefer to keep it simple and offer tapas-style morsels with your Aperol Spritz.

Italy’s most tourist-filled city can still offer a surprise or two. However, many of Venice’s top restaurants are exorbitantly expensive – and noticeably devoid of Venetians! Instead, – there are numerous bacari (tiny hole-in-the-wall bars), osterie taverns, and enoteche (wine bars) dotted around the city. Many of these sell delicious Venetian tapas known as cichetti during the fabled aperitivo hour. Castello and Santa Croce have plenty of options, although our favorite destination is the bustling Campo Santa Margherita in Dorsoduro and the Fondamenta Nani.

Beautiful Trieste is a mecca for lovers of good food and wine. Early evening drinks often stretch long into the night, with the city’s inhabitants forgoing dinner in favor of the apericena buffets found throughout Trieste. On Via San Nicolo, you’ll find numerous bar/cafe destinations catering to an eclectic mix of suits, tourists, and students. The old town can get very crowded, although there are plenty of respectable aperitivo options.

Tuscany’s unmissable capital puts on a grand show as the sun goes down. But, of course, you couldn’t possibly try all the cafes, wine bars, and restaurants in one visit, so head to the gorgeous terrace at the Hotel Continentale. Admittedly, there are more lavish food offerings in Florence, but the incredible views are indeed worth the price of a cocktail or two. Santa Maria Novella and San Lorenzo also have some great watering holes.

The eternal city is just as committed to hedonism as displaying its endless historical and cultural riches. So rather than spending an evening at just one restaurant, why not wander from bar to bar, enjoying a glass of Prosecco with some tasty morsels before getting lost down the next atmospheric cobbled alley. If you wish to avoid the hoards of tourists, then Trastevere, Testaccio, San Lorenzo, and Pigneto are the districts to seek out.

Classic and contemporary libations of the aperitivo 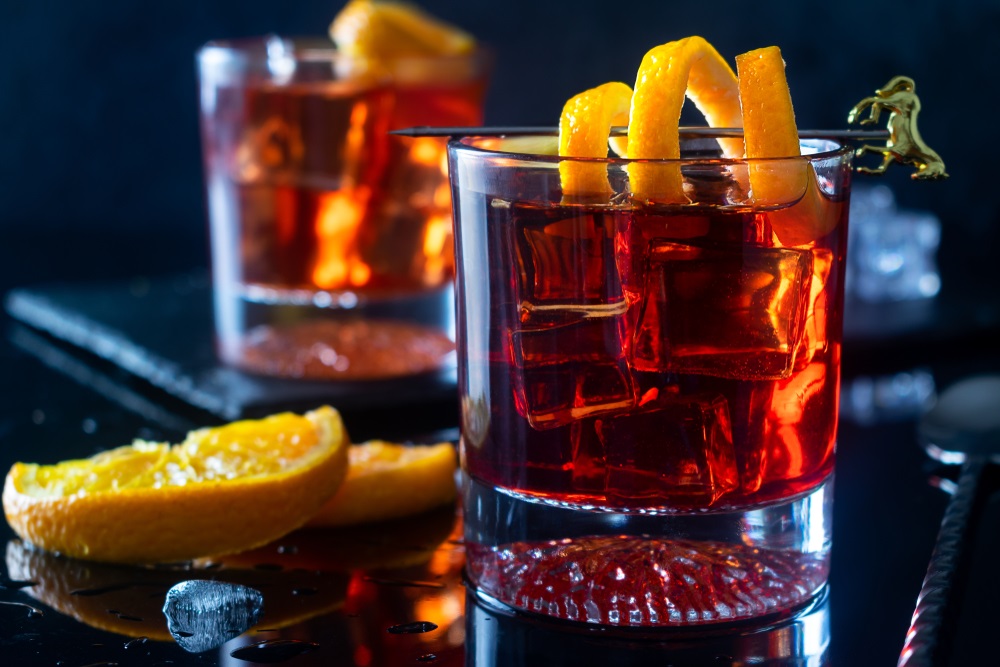 Any list of classic aperitivo drinks must start with the Negroni – the tale of its legendary inception has been told many times. Yet it is a charming fable; Count Camillo Negroni, it is claimed, was a regular patron at the Caffè Casoni bar in Florence in the early 20th century. Legend has it that Negroni was bored of the standard fare in 1919 and asked his bartender to mix a drink involving Campari, gin, and Vermouth. Voila! – sipping sunset Negronis became a national pastime across Italy.

Of course, things have moved on considerably since the days of Count Camillo. There are many variations and riffs on the original classic, including the Negroni Sbagliato (bitters, sparkling wine, and Vermouth), which was coined in Milan’s Bar Basso. It literally means ‘wrong Negroni,’ although its millions of fans worldwide would disagree. The Milano-Torino is another favorite: equal parts red Vermouth and Campari.

In close competition is the much-loved Aperol Spritz. Invented in 1919 by two brothers, Luigi and Silvio Barbieri, Aperol was born in the city of Padua. It is an orange-colored liqueur with less of a bitter edge than Campari. Venetians, in particular, are very fond of mixing Aperol with Prosecco and/or soda water, ensuring that the Aperol Spritz is both delicious and very easy to make.

Traditionally, the aperitivo called for a bitter and low alcohol drink to stimulate the appetite before dinner. However, a growing number of Italians are varying their diet, thus preferring a chilled glass of Franciacorta, ‘undulated’ Prosecco, or simply a glass of red or white wine. In luxury hotels, the aperitivo buffer may be accompanied by an extensive list of designer cocktails, while in the tiny bars of Venice, only Prosecco or Aperol Spritz may be on the menu. Yet, the aperitivo tradition acts as the great unifier, drawing together a diverse population who live in a geographically and culturally varied landscape. It is the social aspect, above all else, that draws Italians of all denominations (and tourists) to this irresistible pastime. The aperitivo represents the very essence of La Dolce Vita – the almost indescribable energy that accompanies any night out in Italy.