While the delicious specialty foods of Emilia Romagna are famous worldwide, the region’s wines tend to get overlooked. Yet the area known with good reason as Italy’s Food Valley produces some perfect wine pairings for its tasty dishes. One such wine is the bright and lively sparkling red Lambrusco. Served chilled and made in many versions, it’s ideal for the region’s specialty charcuterie and rich egg-pasta dishes. Its production area coincides almost entirely with that famous Food Valley across Modena, Reggio Emilia, and Parma provinces. 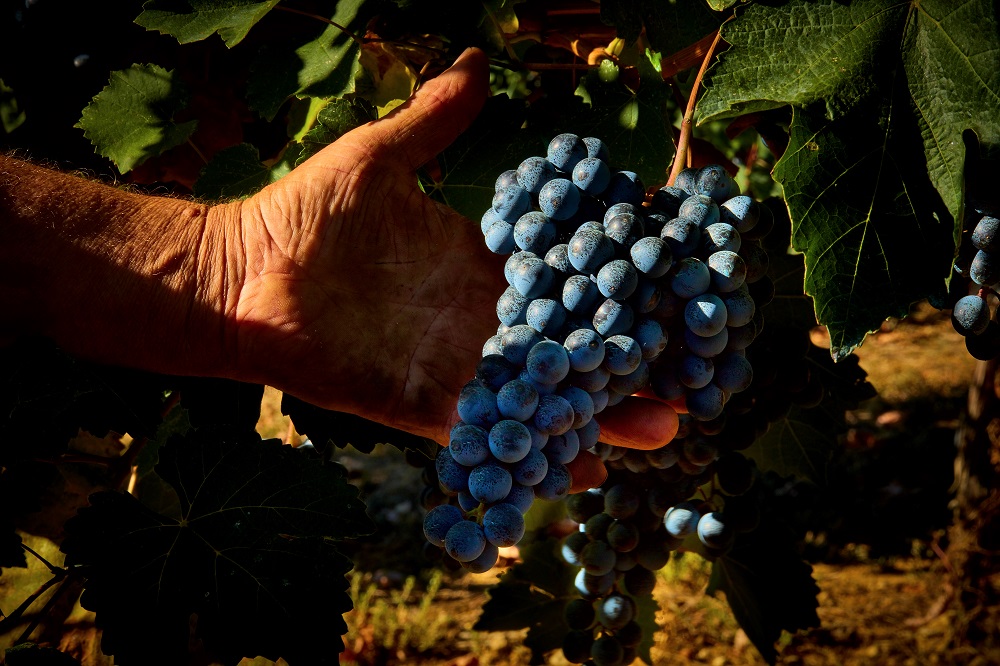 The term Lambrusco groups together a family of around a dozen varieties of red grapes. If your memories of Lambrusco center on the predominantly sickly sweet versions of the past, think again. The world of Lambrusco has evolved immensely over the past few decades. Lambrusco vines are among Italy’s most ancient, grown since Ancient Roman times and mentioned by Latin writers Virgil, Cato, and Pliny, the Elder. The term ‘Lambrusco’ is thought to derive from the era, combining the Latin words for ‘edge’ (labrum) and wild plant (ruscum), referring to the hardy vines that grew spontaneously at the edge of roadsides and fields.

Throughout the ages, Lambrusco wines have continued to be made in the same area and may even have played a role in shaping history. Legend has it that medieval leader Matilde di Canossa, allied with the pope, sent abundant supplies of Lambrusco wine to enemy troops who imbibed with too much enthusiasm before falling into a deep, satisfying sleep, allowing her army to win the Battle of Sorbara. It’s here, around Sorbara village and the city of Modena, that one of the three most popular types of Lambrusco, also called Sorbara, is made under the Lambrusco di Sorbara DOC. Naturally pale in color, Lambrusco Sorbara wine often resembles a rosé and being high in acidity, it’s ideal for spumante. This sparkling wine style is increasingly being made by the Traditional Method of bottle-fermented technique at wineries such as Cantina della Volta (cantinadellavolta.com) by Christian Bellei, a fourth-generation winemaker and expert in the style.

Lambrusco can be made according to various techniques for sparkling or semi-sparkling (frizzante) wines. While the bottle-fermented Traditional Method and ‘Ancestral Method,’ or pét-nat, which used to be the most typical, are growing in popularity, most wineries continue to use the tank, or Charmat Method, for the second fermentation to create the sparkle. 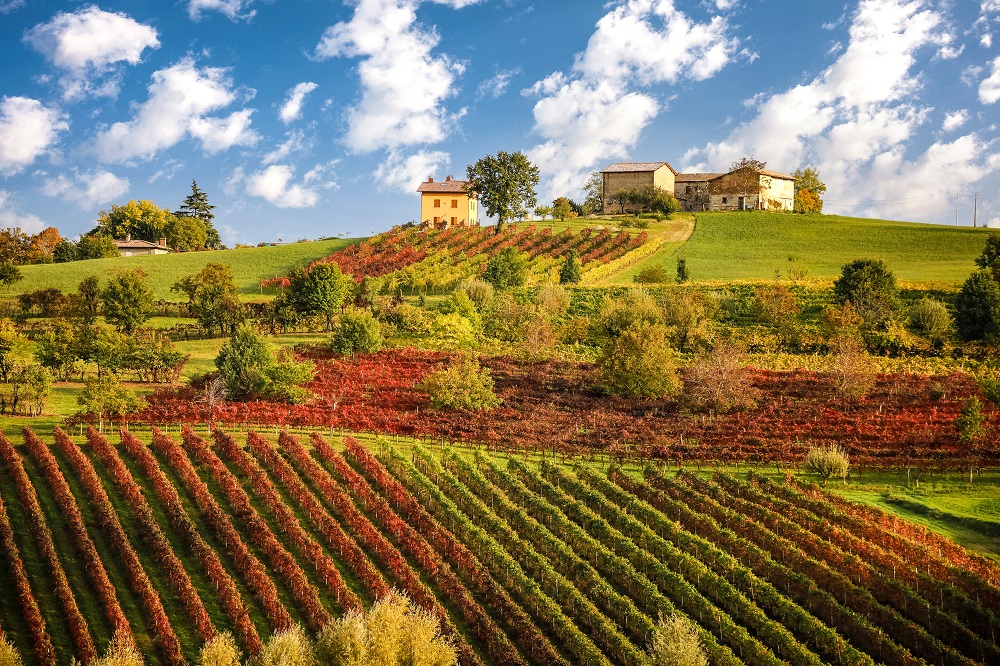 One such winery is the family-run Fattoria Moretto in the hills of Castelvetro, just south of Modena, where the Altariva brothers produce excellent versions of the local variety of Lambrusco: Grasparossa. A deep brick red with more complexity than some of the other Lambruscos, Grasparossa is a good match for more structured dishes. Grasparossa means ‘red stalk,’ and it’s not just the stalks that turn a striking flame red in the fall; the leaves do too, making the hillsides a true spectacle. The medieval village of Castelvetro is an attractive place to visit with a checkerboard piazza where historical pageants and a Grasparossa festival dedicated to the wine take place each September. There’s also an interesting wine museum, ‘Rosso Graspa,’ in the atmospheric setting of Levizzano castle close to the village. Recently, a dozen Castelvetro-based producers, including the Altariva brothers of Fattoria Moretto, got together to create the Montebarello 155 consortium with extra regulations for their wines, such as organic farming, low yields, and single-variety Grasparossa, aiming for focus and quality.

Another variety dominates in the flatter lands to the north of Modena: Lambrusco Salamino. Named for its bunches’ long, salami-like shape, Salamino makes a deep purple, intensely fruity wine with blackcurrant notes and good acidity. Modena is the place that’s best known for its Lambrusco – the city even has a Lambruscheria wine bar that’s behind themed events such as the itinerant Lambruscolonga tasting event held twice a year around the historic center in early May and September/October.

However, a large proportion of Lambrusco is also made in the Reggio Emilia province, just west of Modena. One award-winning organic Salamino Lambrusco to try is ‘Concerto,’ made by the Medici Ermete family-run winery near Reggio Emilia. Often forgotten due to its position between the more celebrated cities of Parma to the west and Modena to the east, Reggio Emilia produces excellent versions of specialties typical to its neighbors, including Parmigiano Reggiano and traditional balsamic vinegar made primarily with Lambrusco grapes. The chateau-style Venturini Baldini estate, also near Reggio Emilia, houses the area’s oldest balsamic vinegar loft dating back to the 17th century. They also make some outstanding Lambrusco, including the Cadelvento rosé spumante and the more traditional Marchese Manadori blend of four different types of Lambrusco grape. Footpaths from the estate link up with some of the area’s hilltop castles dating from the time of Matilde di Canossa.

It’s under 40km from Reggio Emilia to Parma along the Via Emilia – the ancient Roman road that’s still fundamental to mobility in the area, cutting through the Emilia Romagna region from Piacenza in the west to Rimini in the east and passing through all the main cities and towns on the way. A delightful city of art and producer of world-famous prosciutto, among other favorite foods, Parma is generally considered the most refined of the area’s municipalities. The variety of Lambrusco that thrives most frequently here is Lambrusco Maestri, a deeply hued grape with more tannins than most other Lambrusco, mainly made in the gorgeous hilly area, Colli di Parma, just south of the city. This pretty region is also dotted with medieval castles and is a delight to visit. One leading winery in the area is Monte Delle Vigne, where, along with excellent Lambrusco, some superb still wines are made, such as Callas, an intriguing white dedicated to the famous soprano Maria Callas, and made with the local Malvasia di Candia Aromatica grape.

One of the most celebrated Lambrusco wines, Otello, made with 100% Maestri, is named in memory of Otello Ceci, who founded the Cantine Ceci after enjoying great success with the wine he made and served at the trattoria he ran in the 1930s. The Ariola winery (viniariola.com) near Langhirano, the heart of prosciutto country, is run by Marcello Ceci, who broke away from the family business, and he’s undoubtedly proving himself with wines such as Marcello, another single-variety Maestri Lambrusco. He’s also increasing production of Spergola, one of the Reggio Emilia and Parma area’s traditional white grapes that are growing in popularity for its appley freshness and versatility for sparkling and still wines. The village of Albinea, near Reggio Emilia, holds a long-standing festival dedicated to Lambrusco and Spergola each year in late June.

Emilia Romagna and beyond

While Emilia Romagna is the region where the vast majority of Lambrusco is made, a small area of the Mantua province, over the regional border in Lombardy and near the River Po, is also home to some impressive versions under the Lambrusco Mantovano DOC. Here they produce wines with Salamino and Maestri and the local variety of Lambrusco grape, the intense and tannic Viadanese, which is ideal with the flavorsome local stews and other dishes. In addition to the area’s long-standing wine cooperatives, a couple of small organic wineries run by a new generation of producers bringing fresh energy to the local scene and developing individual styles for wines that are well worth seeking out are Bugno Martino and Fondo Bozzole.

With so many different varieties and as many as eight regulated Protected Designation of Origin zones regarding Lambrusco, there is a hugely wide-ranging selection of Lambrusco wine to be explored. So whether you choose to enjoy it paired with the delicious local food, as a perfect partner for pizza, or as an aperitivo, you’ll find that Lambrusco has the power to evoke the joyful, genuine, and hospitable nature of its origins, the authentic and under-explored lands of Italy’s Food Valley.