The principal white grape of the northern Rhône continues to divide opinion. One school of thought argues that Marsanne is incomplete without its traditional blending partner Roussanne; Marsanne is said to bring structure and weight to the party, while Roussanne is responsible for the bouquet. However, for many growers in the region, it is a marriage comparable to Merlot and Cabernet Sauvignon – two grapes becoming something far greater than the sum of their parts.

Yet, in recent years, trailblazing winemakers have begun to challenge the orthodoxy. For example, inspired by the success of Australian and Californian vintners, growers in the south of France have been making some pretty nifty single-varietal Marsanne that does not want for anything. Meanwhile, age-old traditions stubbornly persist in the appellations of Hermitage and Crozes-Hermitage. Yet it’s hard to criticize their insistence on blending Marsanne, as the results are quite often spectacular. Perfumed, luscious, and beautifully textured, the top whites of the Rhône Valley are in a league of their own.

For once, French viticulturists are in complete agreement: Marsanne is universally regarded as indigenous to the Rhône Valley region of south-eastern France. Moreover, the grape’s title is almost certainly derived from a namesake village in the northern Rhône, close to the city of Montélimar. Winegrowing has been important here ever since the Romans arrived in 50 BC. The province’s key settlement was the Roman military colony of Lugdunum, founded in 34 BC. It served as the capital of Roman territories throughout the Rhône valley and beyond, known as the ‘Three Gauls’ under Caesar Augustus. Wine played a major role in Roman culture during this era and was the staple of enjoyment for the Roman army.

After the fall of the Western Roman Empire in the 5th century AD, viticulture remained fundamental to the economic and social life of the Rhône Valley. Over the centuries, Marsanne became synonymous with several key subregions, including St-Joseph, Crozes-Hermitage, Hermitage, and St-Péray. By the late 1600s, these aromatic and full-bodied white wines were renowned as being amongst the finest in Europe. Indeed, when US President Thomas Jefferson toured the vineyards of France in the 18th century, he described Hermitage as: “The first wine in the world without a single exception.” Moreover, the appellation remains a leading source of superlative Marsanne wines.

However, the 19th century witnessed a period of great upheaval in the Rhône. In the 1860s, growers in the southern Rhône started to report a disturbing turn of events: vines were mysteriously dying in great numbers, while every treatment they’d tried had failed. Eight years later, agronomists identified the phylloxera louse as the culprit. In the early 1900s, a massive program was initiated to save France’s vineyards; regrafting vines onto American rootstock was the only effective response. As a result, much effort was put into restoring the Marsanne acreage as a vital part of the viticultural landscape in the northern Rhône. Unfortunately, some varieties were not so lucky: grapes such as Clairette Blanche came close to extinction in the 20th century, as growers prioritized styles that were either high-yielding or easy to grow.

Interestingly, although Marsanne is found in the southern Rhône, chiefly marketed under the Cotes du Rhône designation, it was never permitted in the vineyards of Châteauneuf-du-Pape. Yet the total acreage has steadily increased over the past few decades, partially at the expense of Roussanne; that variety, although capable of yielding stupendous wine, is not particularly easy to grow. In several famous estates – JL Chave is one example – the area under vine was traditionally given over to equal parts Roussanne and Marsanne. But in 2022, it is more likely to be an 80/20 ratio in favor of the latter grape.

Thus, you’d be forgiven for believing Marsanne is effortless to cultivate. However, while the grape is not as mercurial as Roussanne, it needs a specific set of conditions to produce high-quality wine. For example: in certain poor sites in the southern Rhône, the grapes receive too much sunlight, yielding berries with low acidity and aggressive alcohol. Conversely, cool terroirs can result in pinched and charmless wines, lacking body and fruit. This is why the warm but not very hot climate of the northern Rhône tends to produce the most structured and age-worthy wines from the grape.

Nonetheless, the vines can be quite vigorous and therefore require a constant pruning regime throughout the growing season. Marsanne is also sensitive to drought, in addition to being susceptible to mildew and oidium. It thrives in stone-covered vineyards (rock fragments reflect heat into the vine canopy), with clay-limestone in the topsoil providing sufficient moisture. But the most important quality factor is undoubtedly the harvest date. As Marsanne reaches full physiological ripeness, it is liable to lose acidity very rapidly as the sugars accumulate. Timing is everything with this grape.

Winegrowers in the northern Rhône have a real soft spot for Marsanne. Unless the vintage is particularly hot, the grape will yield full-flavored wines with moderate alcohol and good acidity. However, when combined with Roussanne in Hermitage, it can reach fantastic heights: Hermitage Blanc can be utterly magnificent, a perfumed and racy expression of tropical fruit, honeysuckle, and lime. It’s enough to tempt you away from Grand Cru white Burgundy, if only for a day.

Historically, winemaking in the northern Rhône was once extremely rustic. Grapes were crushed, pressed, and fermented in large oak vats called foudres. Temperature control was not employed – growers relied upon the naturally cooler autumn weather to do that job. The results were decidedly mixed: great vintages would eventually reveal their fruity charms (warm temperature fermentations can subjugate the fruit), gaining complexity in bottle over the years. But poor wines never emerged from their hard chrysalis, remaining lean and austere.

Thankfully, that paradigm is long gone. In its place are selective use of skin contact, cold-fermentation of clarified juice, and the occasional, judicious use of oak maturation, together with lees contact. In one sense, the production of Marsanne will closely emulate Chardonnay; the aim is to craft a white of great fragrance, structure, and intensity, capable of aging for at least a decade. A light and airy style of wine are not generally sought.

Many of the best labels of the northern Rhône are made this way; hand-harvested grapes fermented in stainless steel yield very aromatic wines full of fruit and vibrancy. The rise in organic and biodynamic farming only enhances their quality. After that, the Marsanne will typically be blended with Roussanne before it is bottled.

The dividing line in Marsanne winemaking is, of course, the use of oak. Using a percentage of new wood for fermentation and/or maturation profoundly influences style. Such wines, delicious from the outset, offer more richness and opulence than cuvées built around stainless steel. But for every proponent of new barrique, there is a grower who covets the purity and finesse of a ‘clean’ fermentation without wood. So it’s another win for diversity, then!

The many faces of Marsanne

Like so many great wine regions, the Rhône Valley holds a surprise or two. Collectors widely associate the vineyards of the northern Rhône with Syrah, exemplified by the majestic reds of Cote-Rotie and Hermitage. And yet, some of the most exceptional bottles do not involve red grapes.

Indeed, the legendary Hermitage hill was historically almost as famous for its magnificent white wine – some would say the equal of Montrachet. 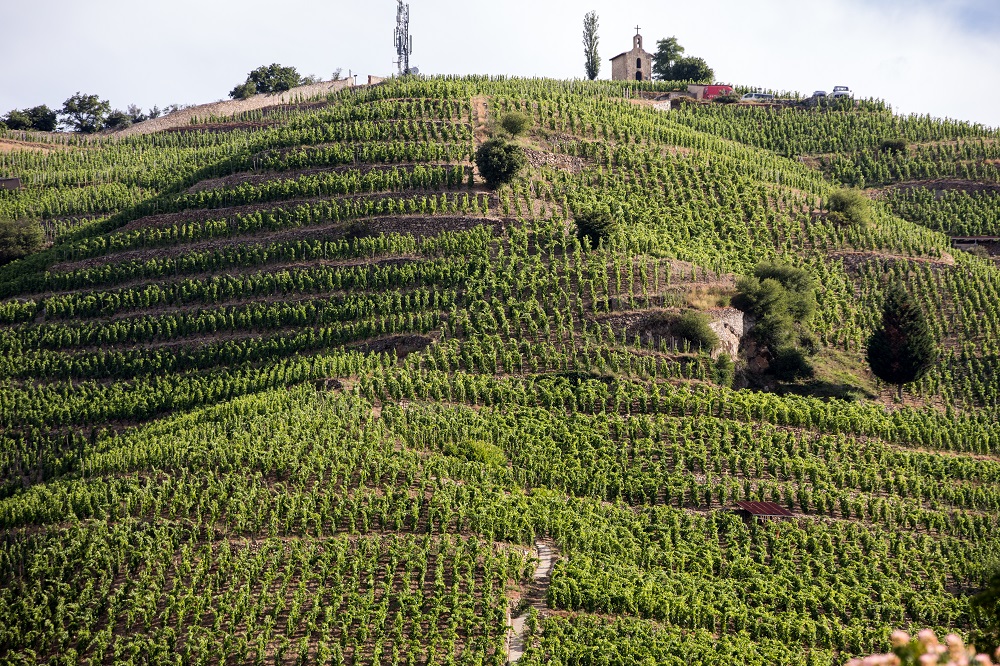 Ancient Marsanne and Roussanne vines are planted on steep terraces made of decomposed flint and limestone; well-drained soils that reflect sunlight into the canopy are ideal for Marsanne. What emerges in bottle is a long-lived and deeply complex white. Young Hermitage Blanc tends to be open and expressive from the get-go, offering passionfruit, pear, citrus, and honey aromas. The palate will showcase moderate acidity and a lovely unctuous texture – secondary flavors reveal themselves over time as the wine is exposed to air. There is an underlying power to white Hermitage, allied to great finesse. With bottle age, it becomes gloriously nutty and decadently rich. Some of the finest cuvées today are based on single-vineyard expressions: L’Ermite, Le Meal, and Les Rocoules are Hermitage’s unofficial ‘Grand Crus.’ Expect to pay.

Yet while most would agree that the finest Marsanne in Europe is produced in Hermitage, it does not hold a monopoly. In the warm expanse of the southern Rhône Valley, many excellent wines are made under the auspices of the Cotes du Rhône appellation; encompassing over 30,000 hectares spread across a wide area, there are some real treasures to be discovered in this underrated designation. Likewise, growers working under the Cotes du Rhône-Villages banner are marketing an enviable portfolio of premium styles at fair prices. The local culture emphasizes blending above all else: Marsanne will often join Viognier/and or Roussanne in the vat, in addition to Clairette Blanche and possibly Grenache Blanc.

However, single-varietal expressions remain rare in northern and southern Rhône. But, there is a destination where you can sample Marsanne in all its ‘unadulterated’ glory – that place is the Languedoc-Roussillon. Over the past 35 years, the region has changed more than any other French vineyard. It has left behind a legacy of industrial winemaking to embrace a culture of hand-made, site-specific wines that continue to electrify wine buyers and sommeliers. It is a paradise of diversity, with a multitude of distinct terroirs, grape varieties, and appellations. And increasingly, it is a wine region that rejects established norms and rules.

The Pays d’Oc designation has become a flag bearer for this rebellious spirit and viticultural renewal. Unlike the long-established appellation contrôlée framework, Pays d’Oc does not limit itself to one specific region; any grower in the Languedoc-Roussillon is entitled to produce white wines labeled as Pays d’Oc, from a palate of 58 permitted grape varieties. Moreover, as varietal labeling is encouraged, consumers no longer need a smartphone to discern what is inside the bottle. So it is here, in the vast web of Pays d’Oc wines, that you’ll discover some fantastic bottles of single-varietal Marsanne. Of course, the grape cannot rival the commercial potency of Chardonnay and Sauvignon Blanc in global terms. But this matters not to the passionate winegrowers of Languedoc-Roussillon. They seek to place their wines in the world’s top restaurants and wine boutiques rather than the indifferent and capricious churn of multinational retail. And, like us, they adore Marsanne!