First-time visitors often believe that the Tuscan cliché defines Italy’s entire landscape. This is perfectly understandable: the rolling hills, olive groves, and sweeping vistas of central Italy have been hyped out of all proportion. Moreover, it is undeniable that Tuscany is one of the most beautiful examples of Instagram heaven on earth, with delectable wines for every occasion. Yet, the region does not hold a monopoly on beauty or viticultural intrigue. The dramatic Alpine scenery of Trentino-Alto Adige is every bit as breathtaking as the Tuscan dream. 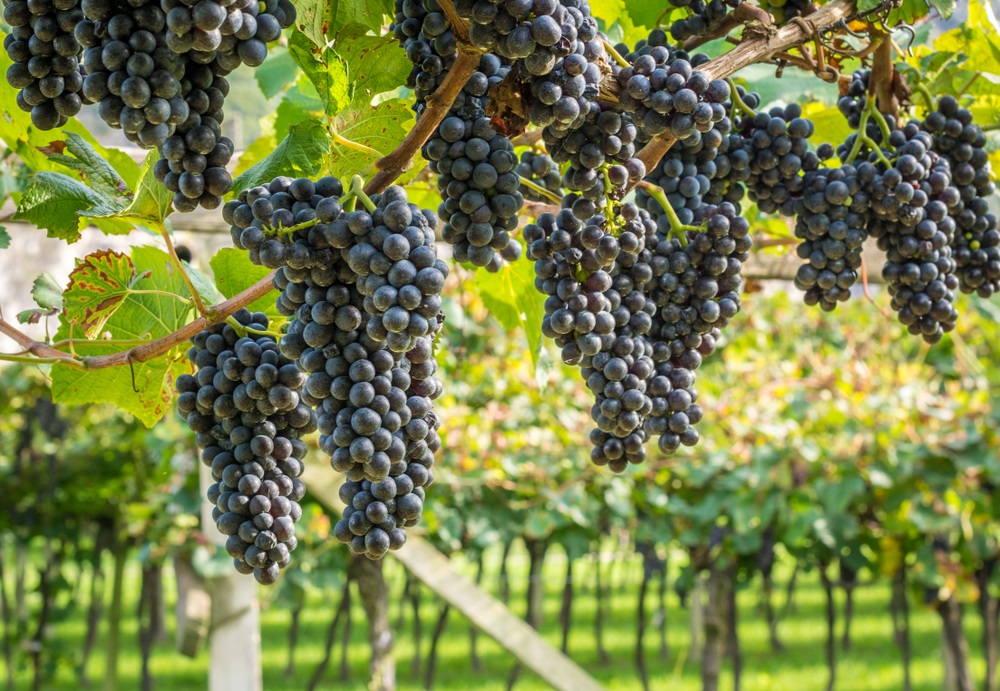 It is also a fertile hunting ground for the esoteric and undiscovered; this part of Italy is awash with grape varieties that command little recognition in other parts of the world. But this is only to our advantage, as a lack of hype keeps prices reasonable and winemakers grounded. Our nomination for northern Italy’s most exciting indigenous variety? It would have to be Teroldego.

The dark-skinned Teroldego has grown in the shadow of the Italian Alps for centuries. Its exact origins have been the subject of fierce debate, albeit the grape’s nomenclature provides a helpful clue. Teroldego in an ancient German dialect means ‘gold for the Tirol,’ the Tirol being the Germanic name for this part of northern Italy. Others insist that the grape is named after a village that prospered in the 1400s, known as Teroldeghe. Extensive genetic tests have proven one thing at least – Teroldego is the parent of Lagrein, another popular red grape native to the Italian Alps. In addition, Teroldego has been shown to be a sibling of the Dureza grape, which is the genetic precursor to Syrah; this would explain a great deal, as Teroldego offers both the deep color of Syrah and the ethereal charms of Lagrein.

You can explore Trentino-Alto Adige Wine Region with Cellar Tours on a private Luxury Food and Wine Vacation, dine in the best local restaurants, and enjoy VIP tastings in the top wineries. 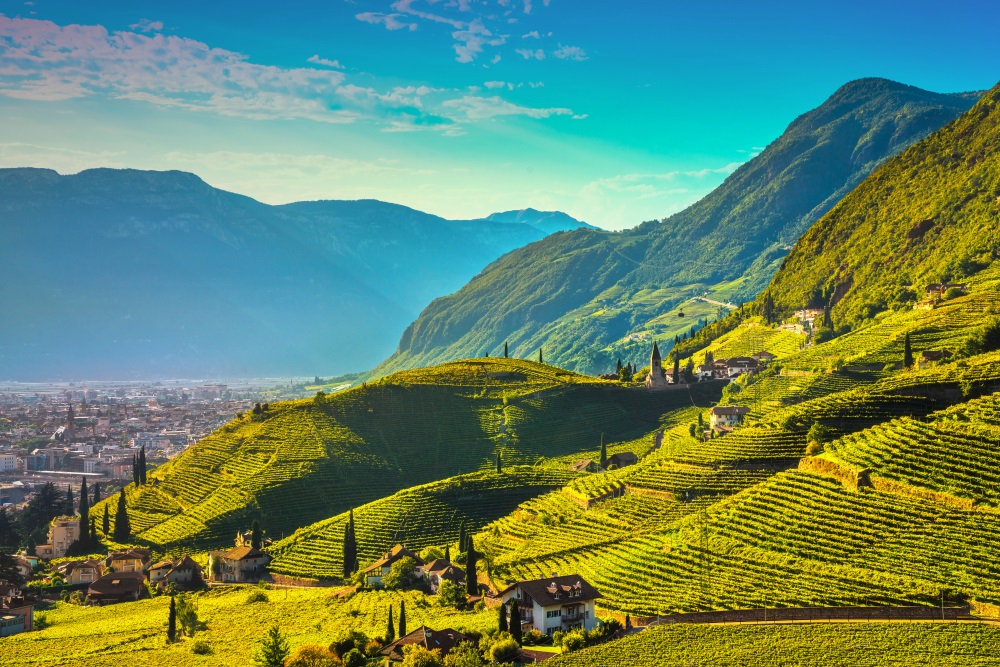 Teroldego’s natural home remains the spectacular Trentino wine region. It is unique in all of Italy because German is spoken as frequently as Italian in Trentino-Alto Adige, while Bierhalles (beer halls) serving Wiener Schnitzels are the most popular form of entertainment in the area. The region situated very close to the Austrian border, the Trentino-Alto Adige province is known as the ‘Südtirol’ in German. Trentino’s geographical boundaries encompass the pretty village of Avio in the south, extending north to the city of Mezzocorona. Vineyards are planted on both sides of the Adige valley, a dramatic corridor that links Italy with Austria over the Brenner Pass. The region is a paradise for growers who seek altitude; over 65 percent of the landmass rises above 1000m, greatly moderating the summer heat.

Today, Teroldego is a popular component of blends produced in both IGT and DOC designations located in all corners of Trentino. Critics are in no doubt, however, that Teroldego reaches its apogee in the Teroldego Rotaliano DOC. Inaugurated in 1971, the appellation is situated in the northern end of Trentino, sandwiched between the towns of Mezzocorona and Mezzolombardo. Vines carpet the gravelly plain known as the Campo Rotaliano – there are approximately 430 hectares under vine, producing both red and a small number of rosé wines. It is the only appellation dedicated to 100% Teroldego wines in Italy.

However, ripening Teroldego can be an uphill struggle, even in the superior terroir of the Campo Rotaliano. It is a late-ripening variety, producing intensely pigmented red wines that require a lengthy – and dry – growing season. Otherwise, the coloring and phenolic compounds will not reach a desirable level of maturity. This can be a challenge, especially in cooler years. Trentino’s climate has traditionally been defined by its relatively mild Alpine summer temperatures, although conditions have gotten hotter in recent years.

Nevertheless, growers of Teroldego generally seek out the warmer lower slopes, particularly if the vines have a south-facing aspect. Higher elevations would struggle to ripen the grapes successfully unless the vintage is particularly warm and dry. Underripe Teroldego is very unpleasant – harsh acidity and vegetal aromas dominate.

In addition, Teroldego vines have this unfortunate habit of ‘shedding’ their berries; grapes are prone to falling off bunches, especially if the vineyard site is exposed to westerly winds. The botrytis fungus is also fond of Teroldego, causing no end of headaches during inclement vintages. If left unchecked, the mold can devastate an entire year’s crop. Historically, Teroldego was usually trained on pergolas ( A wooden structure built from posts and beams) to keep its natural vigor in check. However, the French Guyot or vertical shoot method is now commonly adopted. Frequent pruning is essential as if Teroldego is overcropped; it produces dilute and anemic wine.

But if all goes to plan in the vineyard, the winemaker will have some potent raw materials to fashion an outstanding and aromatic red. According to the DOC regulations, red Teroldego must have a minimum alcohol of 11.5% – likewise the rosato versions. If the wines have a baseline alcohol of 12 percent, they may apply for ‘superiore’ status. There is also a riserva sub-category, a designation for wines that have been aged for at least two years or more in wood before release. Winegrowers emulating the winemaking culture of other Italian regions do not slavishly follow one maturation paradigm. Some prefer to use new (or semi-new) French barrique, while others abhor this practice. They insist that the flavors of new oak should never subjugate the fruit. Aging in old wooden ‘bottes’ (large barrels) is a viable alternative. The wood may be sourced from chestnut trees or even beech.

The best Teroldego wines compete for the title of Italy’s most underrated red. They are simultaneously rich and concentrated yet accessible from the get-go. They combine a lovely bouquet of red berries, pine nuts, almonds, and bergamot with soft and succulent tannins. Teroldego seldom boasts a robust structure, ensuring that even very young vintages are always a pleasure to drink. The fresh acidity and supple mouthfeel offer an irresistible package.

Some oenologists have chosen to sideline the Teroldego Rotaliano DOC in favor of the IGT framework. Established in 1997, the Vigneti delle Dolomiti IGT (Indicazione Geografica Tipica) designation allows other grape varieties to be blended with Teroldego, which is forbidden under the DOC rules. Respected producer and trailblazer Elisabetta Foradori is one such advocate of marketing wines under the IGT rules. Her superlative Teroldego wines, aged in clay amphorae, do not conform to the requirements of the DOC appellation. Thankfully, Vigneti delle Dolomiti offers growers a real and credible alternative. As a result, some of the best wines being made in Trentino today are labeled as IGT.

Teroldego is also cultivated in Tuscany, Sicily, and the Veneto regions, albeit rarely seen in single-varietal wines. Indeed, the grape has long been used to add color to wines produced in rain-soaked vintages, which is almost an insult to Teroldego’s natural brilliance. We can only hope that more growers decide to give Teroldego the respect it deserves. This is a grape variety that can shine without being a supporting act.

It is also a gift to Michelin-starred kitchens. Sommeliers increasingly recognize that Teroldego’s versatility is a strong asset when pairing complex dishes with a multitude of flavors. The advantages are threefold: vibrant acidity, soft tannins, and powerful fruit. This ensures that Teroldego can triumph with more robust seafood delicacies like Turbot and Monkfish but will not be outclassed by richly flavored meat dishes and hard cheeses.

Meanwhile, a hotbed of culinary multiculturalism awaits you in Trentino. As one would expect, Italian and Germanic influences can be found in almost every signature dish, from braised lamb served with polenta and dumplings to spätzle – a fresh egg pasta with medieval German origins. Trentino Alto-Adige is renowned for its charcuterie and cured meats – Speck above all. The ham is cured with bay leaves and juniper before being aged in a smokehouse for several months. Its robust and deep flavor is the ideal foil to Teroldego’s supple tannins and racy acidity. A perfect gastronomic evening needs little else.

After decades of basking in relative obscurity, Teroldego may be about to enjoy its moment in the sun. Abstinence and moderation are on the global rise – analysts repeatedly tell us that wine lovers want lighter wine styles with less alcohol; Teroldego offers the perfect solution. Despite the range of styles on offer, from unoaked to lavishly seasoned in French barrique, Teroldego is generally fresh, relatively low in alcohol, and approachable from a young age. Some winemakers have remarked that Trentino is in danger of becoming achingly trendy. If things keep progressing as they are, that’s a distinct possibility.