Spain’s cuisine is fascinating, varied, and influenced by many diverse cultures, from the Moors, Sephardic Jews, and Latin America. Dishes so ubiquitous in Spanish cooking now (Spanish tortilla, “pan con tomate,” “gazpacho,” and roast peppers, to name a few) did not exist in Spain before colonization. Ingredients such as tomatoes, peppers, and potatoes were brought back to Spain and incorporated into local cuisine. And what about the spices and herbs used in Spain? The Moors brought saffron (called Az-Zafaran in Arabic and azafrán in Spanish) to Spain, originally from Asia Minor. They also brought cumin, turmeric, cinnamon, and coriander (cilantro) to Spain, which are fundamental elements today in Sephardic cooking in Spain and beyond. Mediterranean herbs such as bay leaf, rosemary, thyme, oregano, and especially parsley are all essential in the Spanish kitchen. Dried sweet and spicy peppers are used in a kaleidoscope of ways, most notably to make ground paprika (“pimentón”), an essential ingredient in flagship Spanish dishes like paella. Pimentón is also used to flavor charcuterie like Chorizo and Jamón (dry-cured ham). And sea salt is harvested along Spain’s vast coastline and on the Balearic and Canary Islands, and is used in just about every meal, even breakfast!

The following is a checklist of the most essential and popular spices and herbs grown in Spain and used in everyday cooking today:

Vibrant red paprika, called Pimentón in Spain and referred to as “red gold,” is one of the most cherished spices grown and used extensively in Spain. It comes in spicy, sweet, and semisweet variations. There are two quality appellations- Pimentón de la Vera (in Cáceres province) and Pimentón de Murcia (in the coastal southeast). The method for the more popular Pimentón de la Vera dates back to the 16th century when monks at the monastery of Yuste in Extremadura started growing and finding culinary uses for the newly arrived peppers from the Americas. Despite its vast popularity and demand in Spain today, the production is still very artisanal. Capsicum peppers (Jacaranda, Jariza, Jeromín, and Bola pepper varieties) are strung and then slowly air-dried & manually rotated over a very slow-burning holm oak for about two weeks. This gives the peppers their characteristic smoked flavor. After they are dried, they are then deseeded, skinned, and ground in traditional stone mills, and voilà! The result is the most delicious smoky condiment that enhances an array of dishes. It is sprinkled over Galician-style octopus with olive oil, added to garlic soup, and is used to add umami to many stews, including Asturian Fabada and Cocido Madrileño. Fun fact: Pimentón is full of iron, and helps prevent hair loss!

The “Rolls Royce” of Spanish spices, saffron is precious, expensive, and a quintessential ingredient in the Spanish pantry. Grown in La Mancha, the land of Don Quixote, the purple saffron flower (called Crocus Sativus, and informally as Saffron Crocus) is a beautiful member of the Iris Family. The fire red stigma is collected painstakingly manually, dried (toasted), and sold both as threads (generally superior) or ground. While saffron is cultivated in other countries like Iran and Italy, Spanish Saffron is considered the best in the world. Saffron production in La Mancha (in the sub-regions of Albacete, Toledo, Cuenca, and Ciudad Real) is completely artisan. Its authenticity and quality are regulated by the appellation board (D.O. P. Azafrán de La Mancha). Manchegan saffron is the “gold standard” of saffron for chefs worldwide and a vital spice used for classic Spanish dishes like Paella and Zarzuela de Marisco (a Mediterranean fisherman’s stew). 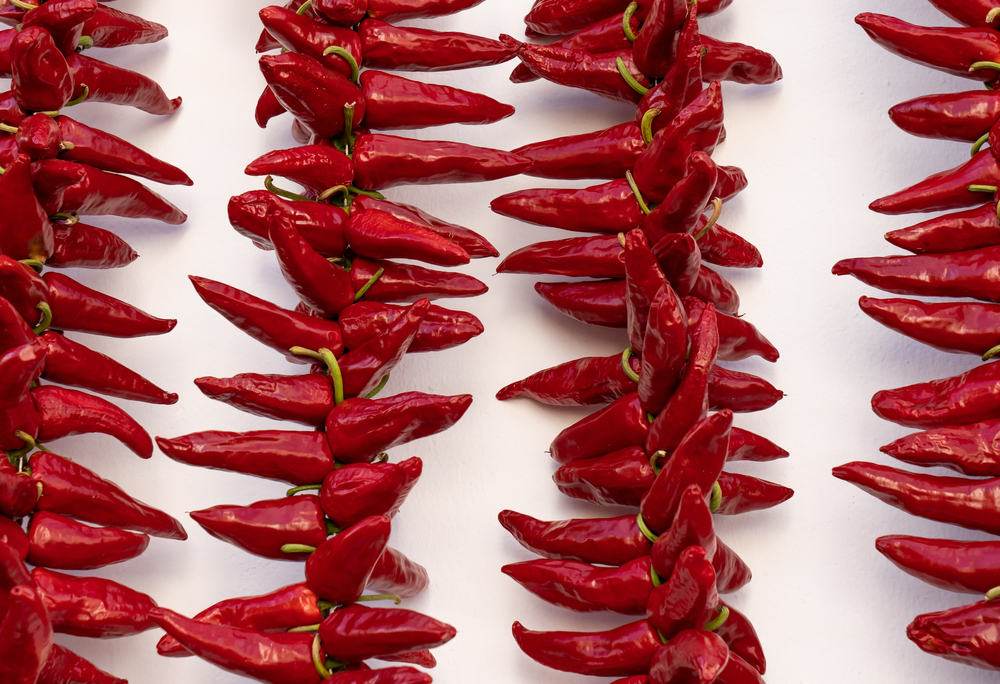 These sun-dried red peppers (capsicum annuum) are grown in Northern Atlantic, Spain (mainly in Pais Vasco). They hang on “ristras” and dry in the sun for at least a month, and sold as dried peppers, which need to be soaked and revived before use. They are used to season some of the most famous local dishes like “Patatas a la Riojana” (a delicious, smoky stew from the Rioja wine country with potatoes, chorizo sausages, garlic, bay leaf, and “pimientos riojanos”). It is also an essential element in “Bacalao a la Vizcaína” (Basque cod dish with a creamy sauce of red onion, garlic, bread, and “pimientos choriceros” whose flesh has been soaked, extracted, and melted into the blended sauce.) Another classic Basque dish, “Marmitako” (fisherman’s tuna stew with potatoes, peppers, and onions), calls for these fantastic dried peppers. 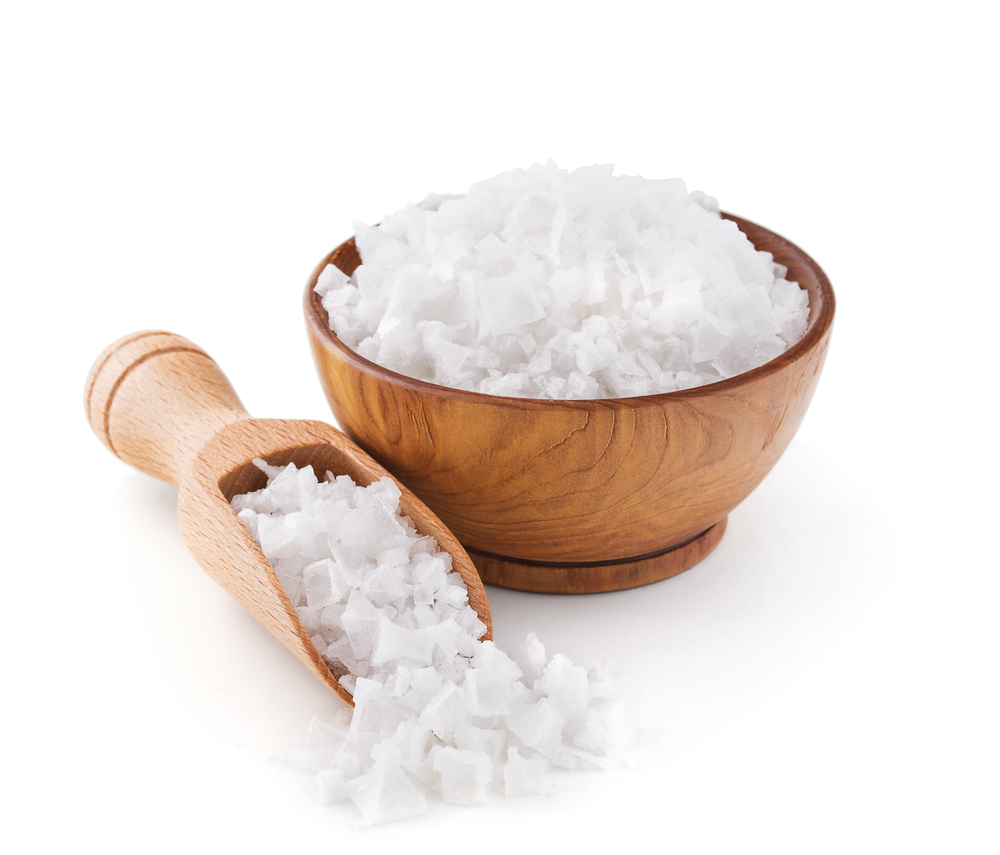 As Fleur de Sel in France and Fior di Sale in Italy, Flor de Sal is super-premium, natural sun and wind dried sea salt. The “flower” reference is due to the floral patterns that appear in the salt crystals. Flor de Sal is generally hand-harvested in Spain, and amazingly, the labor-intense methods used today follow techniques introduced by the Phoenicians and Ancient Romans! Using traditional rakes to gently extract the delicate, top layer of sparkling salt crust from the basins of the salt pans, it then simply dries under the Spanish sun. This is truly nature at its best! This natural, virgin marine salt is extremely rich in minerals and nutrients and is the purest of all salts with an authentic taste of the sea. Rather than being used in dishes while cooking, it is mainly used as a flavor finish by top chefs and home chefs alike. Without a doubt, this is the crème de la crème of all salts, and yet an affordable daily luxury at the same time as a little goes a long way. Salinas D’ Es Trenc in Mallorca, one of the best producers in Spain, makes wonderful gourmet flor de sal condiments with creative flavors like hibiscus, orange, and chili lemon, and lavender. Sprinkle flor de sal over salads, crusty bread doused in olive oil, fish and meat dishes, and surprisingly, over chocolate mousse. Indeed chocolate and flor de sal are an unbelievable flavor match made in heaven! 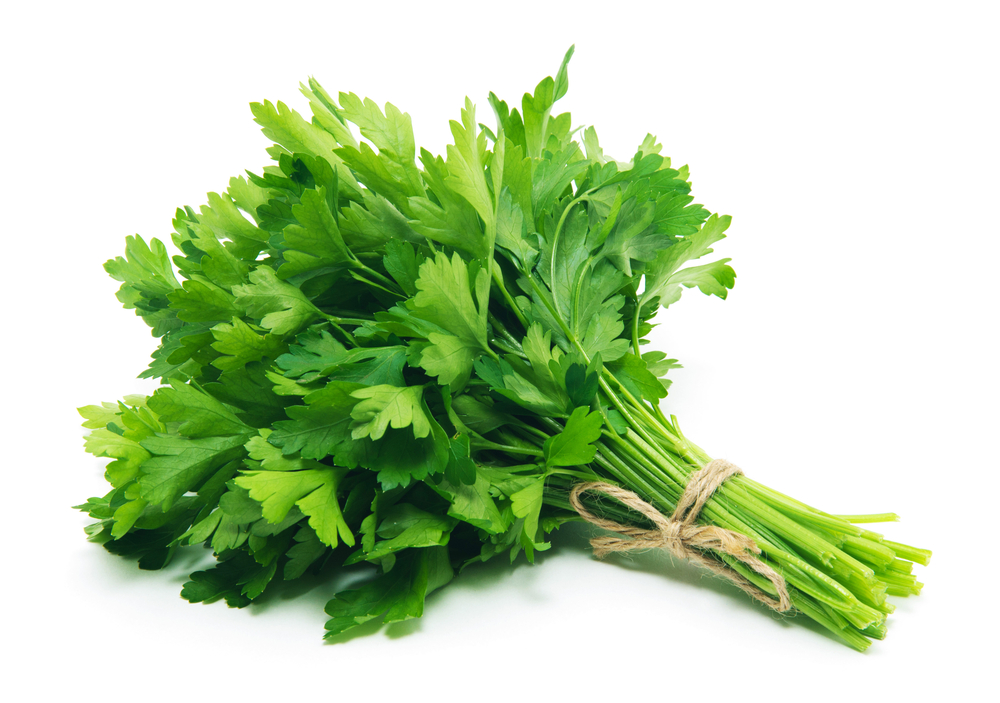 Parsley is to the Spanish what basil is to the Italians, and is used nearly daily; such is its importance in the Spanish kitchen. “Perejil” is described in Spain as being “modest, obligatory, simple, and succulent.” The mythical three Michelin starred chef Juan Mari Arzak famously quipped that “a good Basque eats 33 kilos of parsley per year”. And he has a point. Parsley is fresh, versatile, inexpensive, bright, and attractive, and it is chopped and sprinkled over virtually everything in Spain! This fragrant Mediterranean herb marries perfectly with garlic and lemon and is used in a kaleidoscope of classic sauces. The most famous parsley-based sauce would be the aptly named “Green Sauce” (“Salsa Verde”), used for all manner of fish dishes and made with parsley, white wine, garlic, fish stock, and olive oil. In Northern Spain, it is an essential ingredient of “Chimichurri,” which, although likely originally from Argentina or Uruguay, is a hugely popular meat sauce in Atlantic Spain (especially Basque Country and Asturias). Like all fresh herbs, parsley is good for you and has an array of health perks such as a high percentage of Vitamin K (good for your bones and calcium absorption), it is anti-inflammatory and is even thought to help prevent breast cancer! Fun fact: parsley is also a natural breath freshener 🙂 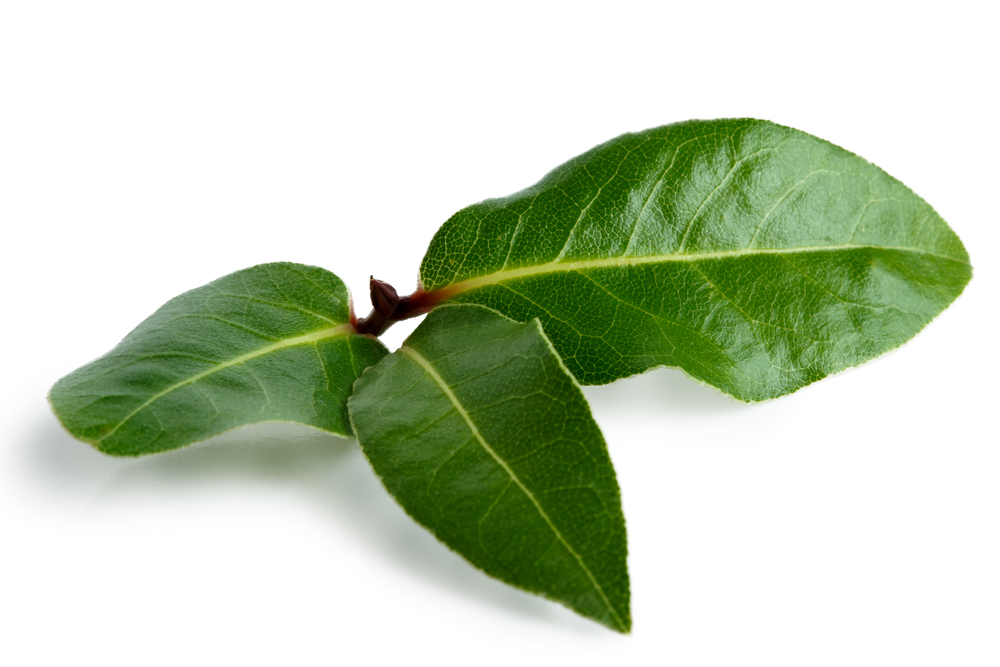 The Mediterranean Bay Leaf plant (which is an evergreen tree), is called “Laurel” in Spain and is probably THE most popular herb used in Spanish cuisine. The delicate silver-green leaves are dried (drying the leaves intensifies the flavor and gets rid of any bitterness) and added to all manner of mouth-watering, aromatic slow-cooked stew, and soup dishes. Traditional dishes using laurel leaves include white bean and chorizo sausage stew, lentil soup, lamb stew, chicken and garlic bakes, braised rabbit, and so many more. A medieval dish still made today is “Perdices en escabeche de clavo, laurel y canela”- brined Partridge, cooked with cinnamon, laurel, and a clove. Flavor-wise, Laurel is often used in conjunction with other dried herbs like thyme and parsley, and it has many health benefits. It works as a diuretic for digestive problems and helps ease stomach pains like ulcers and colics. Laurel is antiseptic, helps with inflammation, and has antimicrobial and antioxidant compounds to boot. No wonder it is popular!