Ham is a Spanish national obsession, and deservedly so!

Spain has a long history of curing ham for personal consumption, one which has emerged from its humble origins as a peasant rural tradition to become a highly prized item for connoisseurs of Spanish cuisine and all classes of Spanish society. At the top of the quality, tree stands Jamón Ibérico – produced from a special breed of Wild Boar that is world-renowned for its fantastic flavor. It is served across the country in select tapas bars, and at its finest, is the undisputed champion of Spanish gastronomy. Its beauty lies in its simplicity – a soft and silky-textured ham with a deliciously sweet flavor and aroma. 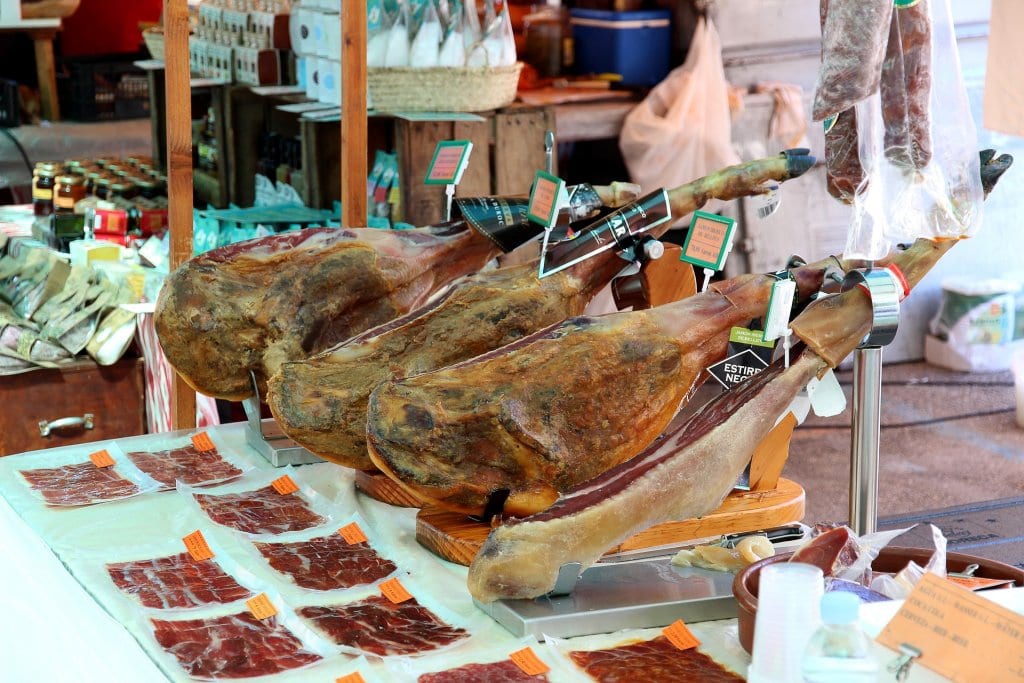 Some of the best Jamón Ibérico comes from Andalusia’s mountains, although it is produced in several other regions in Spain. Moreover, while Ibérico ham is justly celebrated, it is merely one part, not the whole picture of Spain’s Jamón culture. Several different categories and specialties of Jamón exist, the finest examples demanding impressive prices, short supply, and high demand!

Cured ham has been recognized for its health properties since the Antiquities. Hippocrates himself recommended patients to “eat more ham.” Oleic acid is the main fat component in cured hams, a “Good Cholesterol” compound also found in Olive Oil. In Southern Europe, small but regular (almost daily) amounts of ham form part of the Mediterranean Diet. While Italian Prosciutto and other hams are well known outside of Italy, Spanish “Jamón” (artisan cured hams) is an expensive delicacy that has been, until relatively recently, a best-kept secret in Spain. However, the secret is out, and Jamón is increasingly treasured by foodies all over the world. There are two main categories of Jamón- the Iberian Ham (Jamón Ibérico) and Mountain Ham (Jamón Serrano).  Both are cured hams made by salting (with Sal de Mar) and hang drying in cellars with natural ventilation for over a year. Serrano is usually aged for a year and a half while the much more exclusive and expensive Ibérico is aged up to 3 years.  A range of native breeds of pig, such as the Cerdo Ibérico, whose hams are often called “Pata Negra” after their black hoofs. Jamón Ibérico represents a fraction of Spain’s ham production and has different subcategories of ultra high-quality sublime hams.

The main categories of Spanish Ham

There are five broad categories of cured ham available in Spain today, and they are at least partly differentiated according to the breed of pig from which they were produced. The most common is the Serrano ham, produced from the meat of the European white pig. However, the name Serrano specifically refers to the cut of the ham, rather than a breed used to produce the tasty Jamón. The best examples – salt-cured ham, which is dried in mountain (Serrano) air – can be a delicious, cheaper alternative to the more expensive Jamón Ibérico. It is produced as follows: after slaughter, the legs and shoulders of the pig (the finest Jamón is said to come from the hind legs) are preserved with sea salt for two weeks, drawing out the moisture in the meat. After washing the salt off, the hams are hung for about a month before being moved to a Secadero (drying room). They will be aged for over 7 months in warm, dry conditions that cause the fat to infiltrate the muscle. Finally, the Jamón is left to settle in a cool bodega for about two months before release. 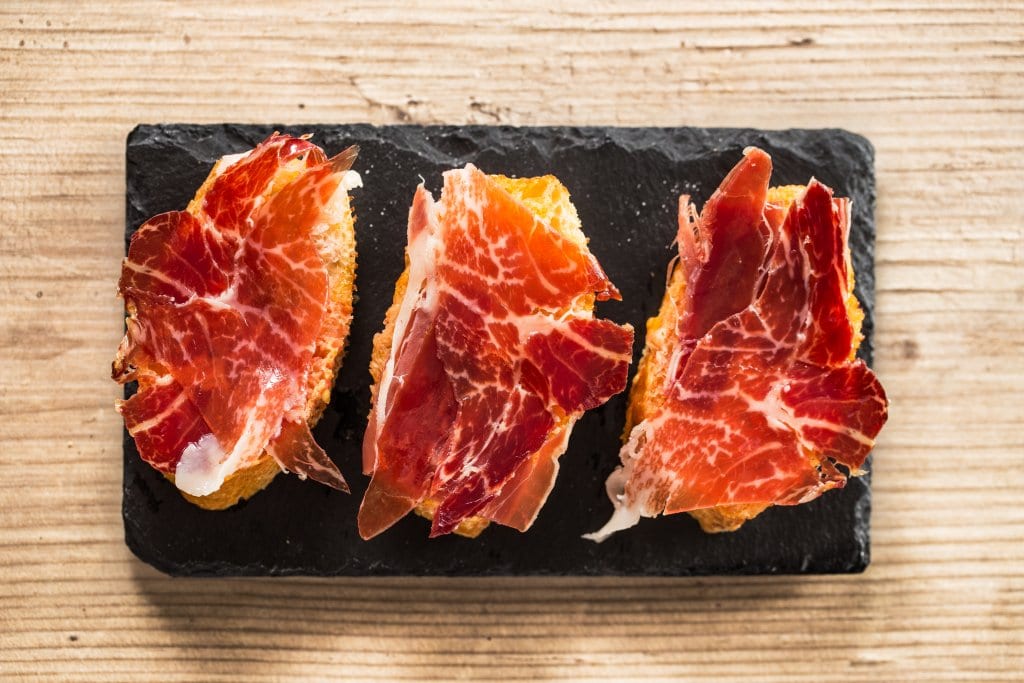 The next step up in the Jamón hierarchy is the prized Jamón Ibérico, produced from a descendant of the European Wild Boar found in small numbers in Dehesas, which are oak forest reserves in south-west Spain. The finest is undoubtedly the Jamón Ibérico de Bellota, which is only made in small quantities from pigs that feast on acorns and justify its high price with its unrivaled depth of flavor texture. The villages of Jabugo in the Sierra de Aracena and Trevelez are famed for producing the tastiest cured ham in Spain, also known as Pata Negra. However, ‘ordinary’ Jamón Ibérico can be produced from mainly grain-fed pigs, known as de campo. The hams are aged for over two years before release and offer a more intense flavor than the ubiquitous Serrano ham. 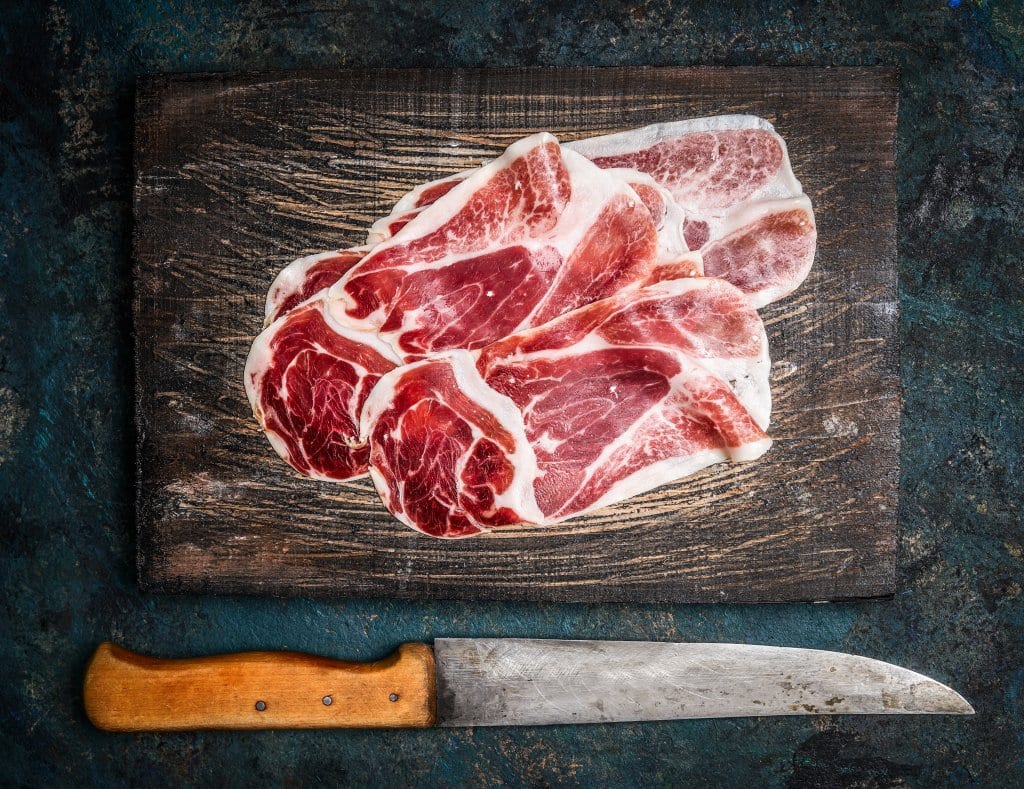 Jamón de Cebo is considered superior to de campo ham, as the pigs are fed acorns (bellotas) in addition to standard grain. This acorn diet permeates into the flavor of the best Ibérico hams. Apparently, it lowers the level of bad cholesterol when consumed – as if we needed an excuse to enjoy this wonderful delicacy! Also, there is a category of ham that sits somewhere between the finest Jamón de Bellota and the Jamón Ibérico. 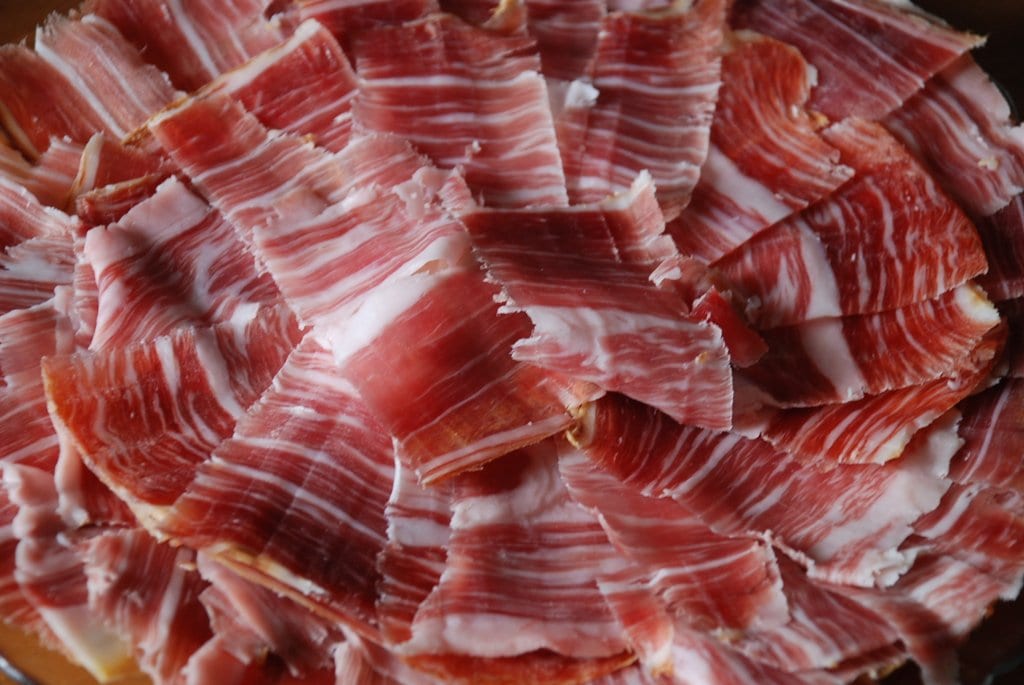 Guijuelo Jamón, a protected designation of origin in the south-east of the Salamanca province, in Castile-Leon. Although the ham is produced from boars, which may not be 100% purebred, it is still held in high regard in Spain. The animals may originate from several regions across Spain: including Andalucia, Extremadura, and Huelva, but the hams must have been cured and aged in the province to qualify as Guijuelo ham. Over 70 towns and villages in the region have the right to produce this succulent, flavorsome Jamón, which can either be classified as Ibérico or as the superior de Bellota, depending on the pig’s diet. Like other high-quality Jamón, the Guijuelo curing and aging process can last three years, in contrast to the much shorter period for the standard Serrano ham. The resulting product is sublime – Guijelo Jamón is renowned for its juicy, tender texture and a strong, almost overpowering flavor. It is also admired for its relatively low salt content compared to other quality Spanish hams – a benefit of Guijuleo’s arid climatic conditions, which allow for a much shorter curing process than in other parts of Spain. 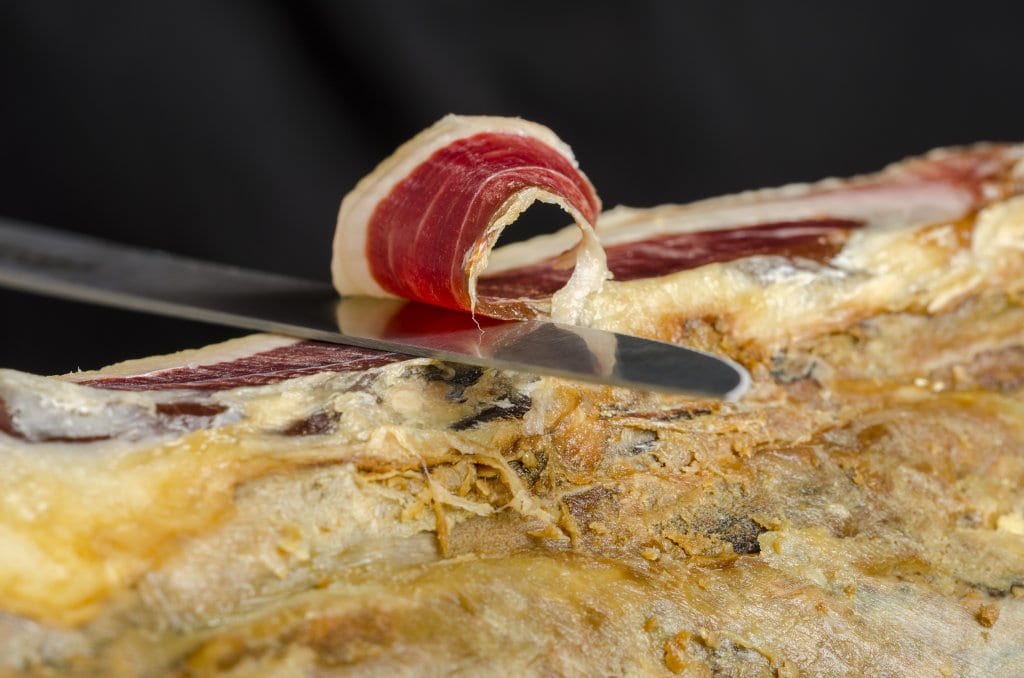 But of course, the most celebrated ham is the Ibérico de Bellota from specific designations in southern Spain, which is protected by strict appellation laws to ensure quality and released in small quantities every year. Wild Boars roam free across Spain’s protected Dehesas, gaining weight from an acorn diet. The curing and aging process has been followed for centuries and remains largely unchanged today, albeit updated with the latest temperature control technology. The final product is simply stunning: a silky, slightly salty ham that astounds first-time tasters with its aroma and flavor. Aficionados of Jamón de Bellota will insist that you consume the ham with little more than plain bread and a glass of sherry. The paper thinly sliced Bellota melts in your mouth literally and can be served as a “tapa” or “pintxo,” accompanied by a fine Jerez wine like the nutty Amontillado.

How to serve Jamon 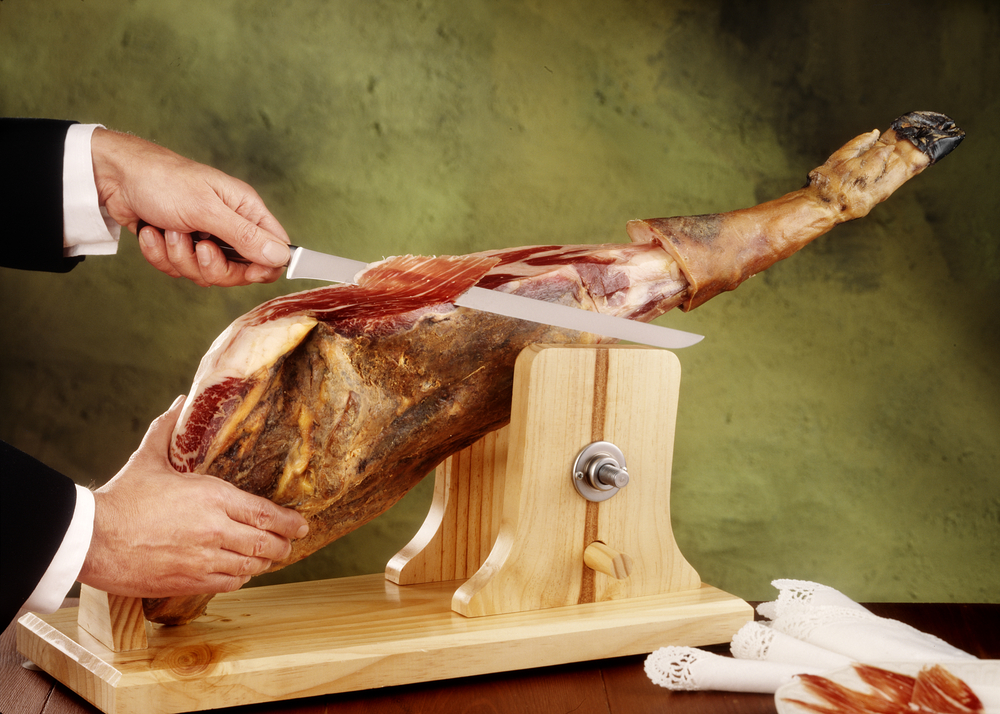 The ham leg (and hoof) is placed into a “jamonero,” a base that sits on the counter (seen in virtually all good bars and restaurants in Spain, as well as private homes). Then, the real art form is the slicing of the ham. It must be by hand with an extra sharp knife and sliced as thinly as possible.  The art of cutting ham is seen in Spain as serious as the art of cooking or wine, and “ham slicers” are as highly regarded as top sommeliers. Spain Gourmet magazine recently published a fascinating article about the “Ham Slicer Extraordinaire” world champion Florencio Sanchidrián who has sliced for dignitaries and celebrities as varied as Robert Dinero, Pope John Paul II and of course the King of Spain, Juan Carlos- a well-known gourmet and lover of the “Buena Vida” (the good life).

The following are some of the best places in Spain to enjoy extra-thin slices of Jamón Ibérico:

A Riojan institution, this long-standing tapas bar in Logroño serves only the finest Jamón Ibérico, accompanied by a wide selection of Riojan wines.

This chain of Jamón tapas bars in Madrid has an enormous selection of hams, from the basic range to the ultra-expensive and delicious Ibérico de Bellota.
Website: www.museodeljamon.com

Off the beaten track, this unassuming, blink, and you’ll walk past it tapas bar in Madrid offers delicious Jamón at reasonable prices and, crucially, doesn’t attract hoards of tourists!

Seville is packed with tapas bars, but La Flor stands out due to its wide selection of hams, reasonable pricing, and a fantastic selection of wines by the glass.

The Jamón supremo of Seville, Jotas is the place to pig out on sublime Jabugo Ibérico ham. Worth every cent!
Website: www.restaurantescincojotas.com