Gewürztraminer presents a conundrum. From one perspective, the grape has all the necessary credentials for global fame: one of the world’s most pungent white varieties is both attractively priced and innately food-friendly. Its spicy bouquet, with aromas of rose petal, face cream, lychee, and grapefruit, is instantly recognizable and hard to dislike. Moreover, as Sauvignon Blanc has categorically proven, there is a great demand for aromatic styles in Western Europe and US restaurants. Its popularity, therefore, should be a shoo-in. 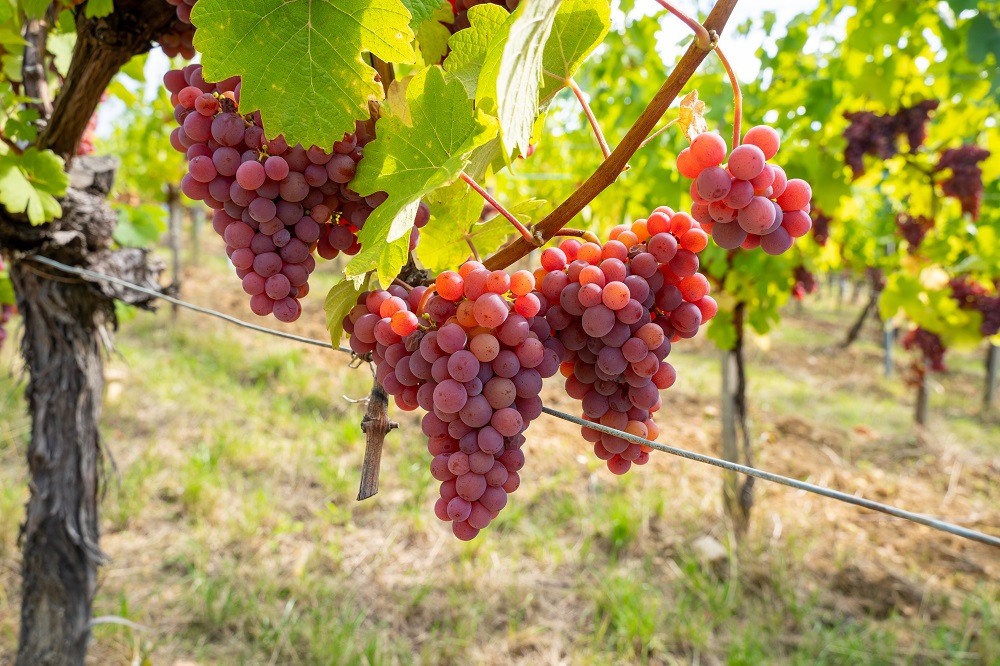 So why aren’t more consumers excited by the grape? Part of the problem is simply a numbers game; Chardonnay, Riesling, and Sauvignon Blanc dwarf its international acreage. In addition, Gewürztraminer has long been used to make late-harvest sweet wines in the vineyards of Alsace – a category that is hardly in vogue! But if you give this variety a proper chance, it will dazzle and astound your dinner guests with its beautiful perfume, voluptuous palate, and racy acidity. Trust us: you don’t want to miss out on drinking Gewürztraminer.

It seems that Gewürztraminer is as difficult to pronounce – geh-vurtz-tra-meen-er – as it is to study initially. Indeed, while the grape’s genetic ancestry has been the subject of intense debate, viticulturists are no closer to finding a definitive answer. There are several theories: agronomists once believed that Gewürztraminer was ‘born’ in the village of Tramin, situated in the Alto Adige (Südtirol) region of northern Italy. However, the Swiss ampelographer José Vouillamoz debunked this claim, arguing that there has never been a synonym for Traminer in Alto Adige.

Instead, Vouillamoz believes that Gewürztraminer is related to the ancient Roter Traminer variety, also known as Savagnin Rose; the shared nomenclature with the village is just a coincidence, he says. Many viticulturists now believe the grape can trace its origins back to southwest Germany; however, there is no definitive proof. Nonetheless, the name Gewürztraminer translates as ‘spiced Traminer’ in English, so we can probably assume that there is a genetic link between this variety and its likely offspring. Over the centuries, Gewürztraminer traveled far and wide: it is now cultivated in Alsace, Austria, Germany, northern Italy, Spain, Croatia, Hungary, and a smattering of New World countries. If any nation shows the potential to challenge Alsace’s crown, it is probably New Zealand. Just don’t tell the French!

Yet the grape’s full title was not used until the 19th century. It was a gardener from Germany, Johann Christian Metzger, who first referred to Gewürztraminer as a grape grown in the Rheingau. By this point, the variety was firmly established in the vineyards of Alsace, used to produce both exceptional dry and sweet wine styles. However, a seismic event occurred in the latter part of the 1800s that completely changed the face of European viticulture. Growers in the southern Rhone had identified a disease that was killing their vines in alarming numbers, but they could not find the cause. Then, panic spread like wildfire as phylloxera (as we now call it) was detected in every major French region. By the end of the century, producers were on their knees.

The cause of all this destruction was a poisonous louse that had emigrated from the US into the vineyards of western Europe. Eventually, winegrowers realized that grafting European vines onto American rootstock would be their salvation. An unprecedented regrafting program was initiated in the early 20th century, although certain varieties were sidelined – or abandoned altogether – during this period. Thankfully, Gewürztraminer managed to survive this viticultural cull; its acreage has remained fairly stable over the past few decades. There have been no major developments aside from a niche interest in growing the grape in Chile and Marlborough.

That said, Gewürztraminer captured the scientific community’s imagination in the 1900s. They took it upon themselves to create several genetic crosses out of the grape. While the French remain ambivalent about using crosses, the Germans have been staunch advocates of genetically ‘splicing’ two different grape varieties (of the same plant: Vitis vinifera) to make a new style. Thus, Gewürztraminer crossed with Muller-Thurgau to make Würzer, while Semillon crossed with Gewürztraminer in the 1930s to create Flora. But as the German experience with Muller-Thurgau demonstrates (the grape yields utterly drab wine), technology must never be allowed to become an end in itself. Nevertheless, the motivation of German viticulturists like Georg Scheu is clear. They wanted to overcome the immense challenges of growing this capricious grape.

Where to start? Gewürztraminer is an early-ripening variety, prone to spring frost damage in northern regions like Alsace. It can also be very temperamental about delivering a consistent yield and is prone to millerandage – this is where berries ripen at wildly different rates. Rot can also be an issue during inclement weather, although this susceptibility can be advantageous when producing botrytis sweet wines from the grape. Gewürztraminer also tests a winegrower’s instincts to the absolute limit: picking the grape at the right moment when its aromas have ripened but before its acidity drops (as it does rapidly) requires immense skill and experience. Only the greatest estates can hope to produce world-class wine out of Gewürztraminer. All else is passable, at best.

The Alsatians wrote the book on crafting balanced and elegant white wines from Gewürztraminer. But it’s not easy: the grape’s skins are rich in phenolic compounds that can overpower the wine if proper care is not taken. When making dry styles, the aim should be a lively, fresh, lychee-scented wine of medium body with a spicy finish. However, successes with this variety are often outflanked by the failures; if growers are too cautious in their approach – picking before the onset of full physiological

ripeness is quite common – then a pale and uninteresting white will emerge. Conversely, a late harvest can equal low acidity, coarseness, and a very unappealing texture that nods in the direction of oil slick.

But let’s assume that everything has gone to plan in the vineyard. Hand-harvested grapes are typically subject to a quick but gentle pressing to only extract pure, free-run juice that is not overburdened with phenolics. As with Riesling and other unoaked styles, the central goal is to protect the must from oxidation and ensure that those volatile aroma compounds are not lost. To that end, sulfur is usually added at the pressing stage to prevent spoilage. The juice is then typically clarified and cold-settled, allowing solid material to sink to the bottom, maintaining freshness into the bargain. By and large, fermentation is conducted in Alsace stainless steel tanks. Some producers still use old oak vats; however, temperature control and sterility advantages are widely recognized today. Thus, glistening steel tanks are as commonplace in Alsace as Flammkuchen! 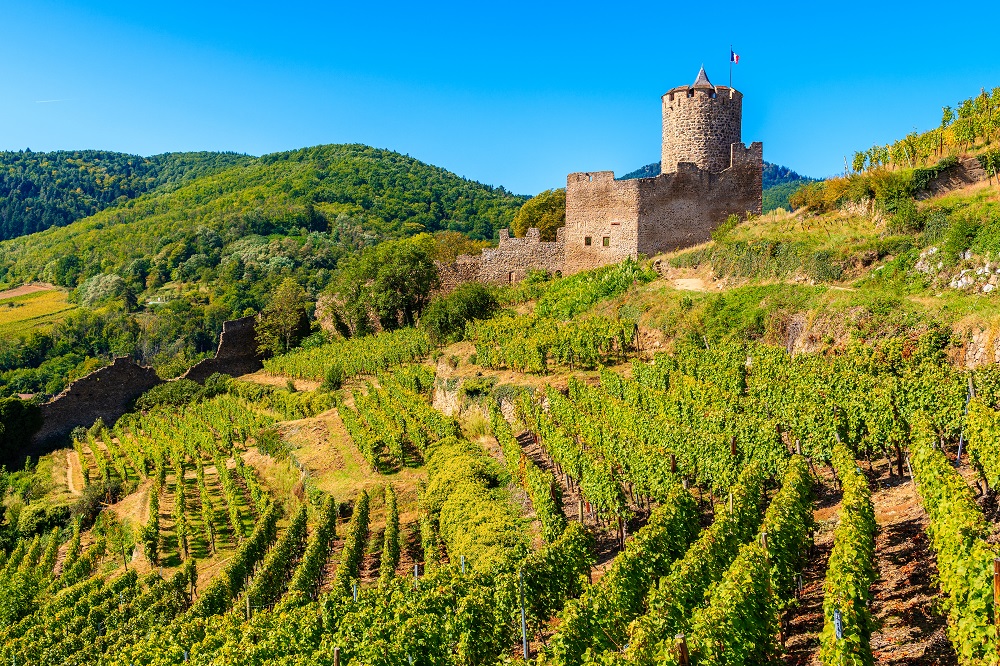 The final stage of the winemaking uncovers a stark dividing line between Alsace and its neighbor across the border. When making aromatic whites like Gewürztraminer, producers in Germany traditionally stopped the fermentation while a little residual sugar was left in the wine. This is achieved by chilling the wine, racking it, or adding sulfur. Yet the Alsatians like to ferment their Gewürztraminer bone-dry unless we’re talking about Vendage Tardive wines. Therefore, German interpretations (ostensibly dry wines) are softer and sweeter than their Gallic rivals; however, they lack the authority of a dry Alsatian Gewürztraminer. Ultimately, it’s just a matter of personal preference. Incidentally, they agree on wood: Gewürztraminer rarely sees even a hint of new barrique. Mention aging in new barrels, and you’ll likely be thrown out of the winery.

One of the most persistent – and irritating – old wives’ tales concerning Gewürztraminer involves Asian cuisine. You must have heard it before: the grape is the ideal partner for Chinese food, particularly fiery Sichuan dishes and Cantonese dim sum. There is just one problem – it rarely works. The truth is that Gewürztraminer and spicy Asian dishes present a clash of egos; pungent flavors tend to cancel each other out, leaving a rather disappointing gastronomic experience. But don’t despair: Gewürztraminer can be a real asset at dinner time if you choose wisely.

You have in your glass a dry, aromatic style of Alsatian Gewürztraminer, produced in the previous harvest. It will be fairly light and racy, with a lovely bouquet encompassing citrus, lychee, and apricot. Such wines are ideal with Aioli; a perfumed white cuts across the garlic heat. Asparagus is another safe bet, as it presents a very difficult flavor for wine due to its woody bitterness. So the wine needs acid and plenty of fruit – Gewürztraminer once again acquits itself admirably. So too, does chicken liver pate call for a pungent white. Step up, if you please, dry Gewürztraminer. Meanwhile, don’t forget that sweet Vendage Tardive wines also work tremendously well with foie gras.

Both fish terrine and salads are ideal partners to dry Gewürztraminer – ideally, a wine with some bottle age and structure. Fishcakes are also divine with Alsatian whites, particularly if the wine was made in a cooler year, and so will have a bracing acidic profile. Our top choice is grilled or seared scallops with Trimbach Gewürztraminer. It’s simply divine.

Alsace’s leading Grand Cru vineyards produce the finest Gewürztraminer in the world. The limestone slope of Zinnkoepfle, facing due south, concentrates the grape to incredible levels of richness and texture – every bit the equal of Riesling and Pinot Gris. The calcareous marls of Hatchsbourg also have a powerful affinity with the variety, yielding dense-textured and pungent wines. For a trio of perfection, seek out the Gewürztraminer wines of Sporen, a Grand Cru renowned for its porous clay soils. The depth and potency of these splendid whites require some Michelin-grade cooking at dinner time. Cheese Soufflé – such as the famous Soufflé Suissesse served at two-Michelin restaurant Le Gavroche – is one of life’s greatest culinary indulgences. Roast veal would come a close second.

Sommeliers in France settled this argument years ago. If you’re drinking late-harvest Gewürztraminer, wonderfully sweet yet balanced by textbook acidity and freshness, you have one option: Tarte Tatin. Expect a silence to descend across the dinner table like a forgotten tomb. It just works.