You can smell a glass of New World Sauvignon Blanc a mile off: a pungent concoction of tropical fruit, blackcurrant leaf, and freshly cut grass. This modern-day exemplar was established by the grape’s most powerful advocate – New Zealand. The Kiwis took a long-established European wine style and propelled its flavors to another dimension; “it’s like jumping headfirst into a gooseberry bush,” to quote the author and critic Tim Atkin MW. On the evidence to date, consumers are very attached to this version of SB on steroids. There is scarcely a wine list that is brave enough to omit the grape, although Sauvignon has faced some stiff competition recently from Albarino and Verdejo. 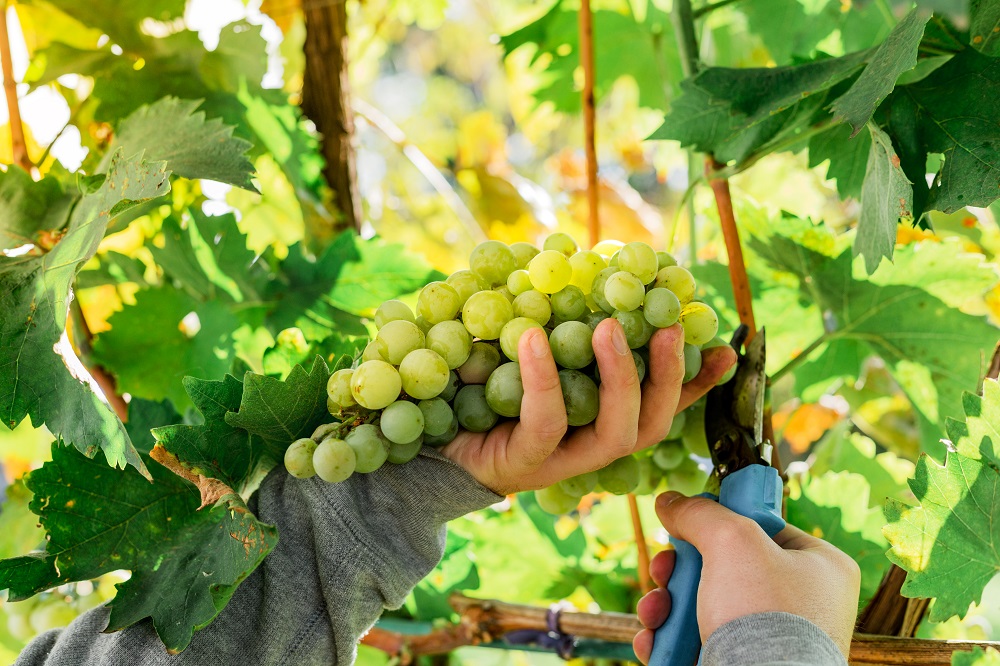 But despite this globally-recognized panacea, Sauvignon Blanc is a grape that remains very open to differing interpretations, depending on soil, climate, and winemaking philosophy. As a result, its detractors like to run Sauvignon Blanc down – it takes a lot of flack for being ubiquitous, overexposed, or just plain boring. Granted, mass market SB is hardly an inspiring drop: you can taste 100 different wines and struggle to spot the difference. Yet the finest expressions from both Sancerre and Bordeaux are complex and supremely elegant white wines that deserve our respect. If your experience so far is limited to chokingly pungent Sauvignon Blanc from Marlborough, we implore you to read on.

Sauvignon Blanc is a vital part of the wine culture in Bordeaux and the eastern end of the Loire Valley. In addition to producing aromatic wonders in the towns of Sancerre and Pouilly-sur-Loire, SB has long been used to craft the world’s finest sweet wines in Sauternes. Bordeaux’s dry styles are no less impressive, albeit unlike the vignerons of the Loire, winemakers in Graves prefer to blend their Sauvignon Blanc with Semillon. The results can rival Grand Cru white Burgundy in finesse and longevity.

Nevertheless, it is widely believed that Sauvignon Blanc originated in the Loire Valley and not Aquitaine. There are written records dating back to the 16th century that reference the gape – Sauvignon Blanc was known as ‘fiers’ during this period. Viticulturists trace the grape’s parentage to an ancient variety called Savagnin; no one can be exactly sure when the mutation occurred, but it seems likely that Sauvignon Blanc has been cultivated in France for far longer than the 1500s. At some point in the unspecified past, cuttings were imported into the Bordeaux region, where Sauvignon Blanc soon proliferated. Today it is found in the vineyards south of Bordeaux, in addition to Entre Deux Mers, Blaye, and Bourg. In the 1990s, a scientist named Carol Meredith undertook a groundbreaking project with her Ph.D. student, John Bowers. At the University of California, Davis, Meredith, and Bowers discovered that Sauvignon Blanc was the progenitor of Cabernet Sauvignon; the white grape was crossed in the wild with Cabernet Franc, creating Bordeaux’s most iconic red grape.

By the 17th century, Sauvignon Blanc competed with Semillon for the title of Bordeaux’s most important white grape. Its reputation was first established in Sauternes, producing beautiful sweet wines (via the botrytis mold) that would become the toast of Europe’s aristocracy in the 1800s. The region’s most important château, the illustrious d’Yquem, has proven that Sauvignon Blanc has a real knack for balancing out the fatness of Semillon, adding freshness and acidity to these exquisite whites. Later on, as the fashion swung toward dry styles, winemakers across Bordeaux adapted the formulae to craft fine whites with few rivals in western Europe. Indeed, the white produced at First Growth Haut Brion attracts a far higher price than the red; those fortunate enough to sample Haut Brion Blanc are usually lost for words. Meanwhile, Sauvignon Blanc was busy conquering the vineyards of the Loire Valley, used to make single-varietal expressions that had little in common with Graves Blanc. Nonetheless, both styles found a willing audience abroad, particularly in the restaurants of Paris and London.

Phylloxera, however, was about the spoil the party. First detected in the southern Rhône Valley in the 1860s, this poisonous louse soon spread to the vineyards of Bordeaux and the Loire Valley. After much loss and devastation, winegrowers eventually discovered that regrafting European vines onto American rootstock would prevent phylloxera from killing the plant. As a result, a massive replanting program was initiated in the 20th century, and growers had to be selective about which grape varieties would return to their farms. Naturally, unproductive and/or difficult varieties were sidelined; however, Sauvignon Blanc was too valuable to marginalize. Indeed, a great deal of Bordeaux’s third white grape, Muscadelle, was replaced with Sauvignon Blanc in the second half of the 20th century. This trend continues today, with the acreage rising yearly – you have to search hard to discover a Bordeaux white that does not contain any Sauvignon Blanc.

Yet the variety is far from easy to grow: viticulturally SB is far more temperamental than Chardonnay, for example, tending to produce small crops one year and inflated crops the next. Much depends on the soil, climate, and plant age – excessive vine vigor can be a major issue in some regions’ blessed’ with fertile soils. In these cases, judicious pruning is essential if the producer wishes to fashion a high-quality wine. Overcropped Sauvignon Blanc leads to the devil of a herbaceous, ‘green’ varietal character – not unlike cat’s urine – and the deep blue sea of oily mediocrity. The variety buds early and yet ripen late, exacerbating the risk of fungal diseases during the harvest period if the weather turns inclement. Conversely, the grape will not tolerate excessive heat, producing flabby and nondescript wine. As ever, balance is the key to success.

The choices are many – limited skin contact or fiercely protective handling. Wild yeast fermentation or the safety of cultured strains? A dash of new barrique or stainless steel all the way? However, this is a relatively modern conundrum – both Sancerre and Graves were mired in rustic winemaking until the 1980s due to limited resources and an initial reluctance to learn from the New World. Take Sancerre: hard pressing of the grapes, rough must settling, fermentation in old oak vats at ambient temperatures, and minimal post-fermentation handling was the standard paradigm 30 years ago. As a result, the wines were often quite austere in their youth, only shedding their chalky exterior after several years in bottle.

Similarly, Bordeaux Blanc has come a long way since the dark days of sulfur-infused bottles of stinky dross – cabbage was the defining aroma of the 1970s! The winemaking, back then, could best be described as bloody awful: vinification techniques and equipment designed for red grapes were lazily used to make white styles, with predictably disastrous results. Much to the chagrin of the Bordelais, it was an Australian winemaker, Brian Croser, who gave them a proverbial kick in the teeth and revolutionized attitudes to vinification. In 1979, Australian investors purchased Chateau Rahoul in Graves – the new owners hired Croser to make their inaugural vintage. Bringing a touch of Antipodean sheen to the Left Bank, Croser demonstrated the benefits of cold stabilization, cool fermentations, and using wild yeast strains. Before too long, all the best châteaux were emulating this approach.

So too, has winemaking in the Loire become much more sophisticated of late. The aim is to achieve a balance between fruit expression and that lovely minerality that flows from the flinty soils of the eastern Loire. Ripe Sauvignon Blanc grapes are packed full of methoxypyrazines: aromatic compounds responsible for that unmistakable whiff of green fruit. The best way to accentuate these flavors is to protect the must at all stages of vinification. Thus, many growers in Sancerre practice a cold fermentation in stainless steel, clarifying the juice and bottling it relatively soon after the harvest. The result is a fresh and elegant expression of SB, underpinned by ripe acidity and beautiful aromatics.

Returning to Bordeaux, there is some crossover in winemaking: cold fermentation and protective handling are widely adopted in the vineyards of Pessac-Leognan. However, the Bordelais are very committed to the idea of blending Sauvignon Blanc with Semillon – mono-varietal expressions are still quite rare in southwest France. Moreover, many top Bordeaux whites borrow heavily from Chardonnay’s playbook; winemakers use oak maturation and lees stirring to enhance structure and mouthfeel. What emerges in bottle is a wine of great fragrance, complexity, and finesse. Every bit a rival to the sacred wines of Puligny-Montrachet.

The Best of Both Worlds

Where do you stand on Marlborough Sauvignon Blanc? You know the benchmark: oodles of tropical fruit crammed into one glass of wine. However, new Zealand’s flagship export, much loved across the globe, takes pungency to the next level – subtly is not its trademark. As a result, the style remains very divisive with buyers and journalists, heavily criticized by those who see New World SB as a somewhat bland commodity. As far as we’re concerned, there is no denying the hedonistic appeal of such a fruit-driven and racy style of white. But part of the fun of wine is exploring its diversity; there are two very credible alternatives lurking in the vineyards of the Loire Valley and Bordeaux. They deserve a closer look.

Sancerre and Pouilly-sur-Loire wrote the book on unoaked Sauvignon Blanc. Although occasionally, one does come across cuvées that have been aged in barrique, they do not represent the critical mass. No, the overriding aim in the Loire is to craft a white brimming with freshness and minerality – a crystalline note of the exquisite. Moreover, while the wines of Sancerre and Pouilly-sur-Loire lack the immediate appeal of New World interpretations, they often have more acidity and structure; the fruit profile leans toward green fruit rather than tropical.

The Loire Valley offers a more toned-down, subtle, and food-friendly interpretation of the grape. The standard and obligatory local pairing with Sancerre is Crottin de Chavignol: pungent goats’ cheese that provides the ideal creamy backdrop to the saline acidity of SB. The wine cuts through the richness of the cheese like no other. Yet there are other gastronomic delights to be discovered – langoustines, oysters, and scallops are divine with good quality Loire Sauvignon, as is bouillabaisse.

You’re in for a treat: white Bordeaux is on a serious high. Both the mighty châteaux of Pessac-Leognan and the lesser-known properties of Graves and Entre Deux Mers have enjoyed a run of excellent vintages of late, producing wines that would shock – and quite possibly appall – the old guard of the 20th century. Weighty, complex, and infused with the rich scents of barrique, these wines can be the antithesis of lighter Sancerre and Pouilly Fume. Typically blended with Semillon and/or Muscadelle, top white Bordeaux comes into its own at dinner time. It offers that extra body dimension and texture that considerably widens your gastronomic options. Dover sole, turbot, and halibut work best; lobster, veal, roast pork belly, and scallops in a cream sauce come a close second. Finally, look out for a bottle of Margaux Pavillon Blanc for an unsurpassed treat. It is made from an 11-hectare plot that is undoubtedly the most famous Sauvignon Blanc terroir in the Medoc – a part of Bordeaux not generally associated with white wine. But make no mistake: Pavillon Blanc is in a league of its own. It’s hard to know what to talk about first – the beguiling nose, depth, or incredibly complex palate that delivers quince, citrus, minerals, guava, and vanilla flavors in a single heartbeat. Like the Grand Vin, it represents Bordeaux winemaking at its very best. It offers proof that Sauvignon Blanc need never play second fiddle to Chardonnay. Or any other grape, for that matter!