Nestled next to Germany in northeastern France, Alsace is a French region that both countries have fought wars over and have ruled at different times over the centuries. The multicultural influences of Alsace’s history are evident in the region’s culinary traditions, cultural customs, and local dialect. Alsace and Germany even share a continuation of the same mountain range. Known as the Haardt Mountains in Germany, they’re called the Vosges Mountains in Alsace. They protect Alsatian vineyards from westerly rain-bearing winds helping the wine region’s leading grapes like Riesling, Gewürztraminer, Pinot Gris, and Muscat thrive. These local Alsatian wines pair well with Alsatian cuisine, which is rich, substantial, and suitable for the cooler continental climate of the region.

You can explore this region of France with Cellar Tours on a private Luxury Food and Wine Vacation, dine in the best local restaurants, and enjoy VIP tastings in the top wineries. 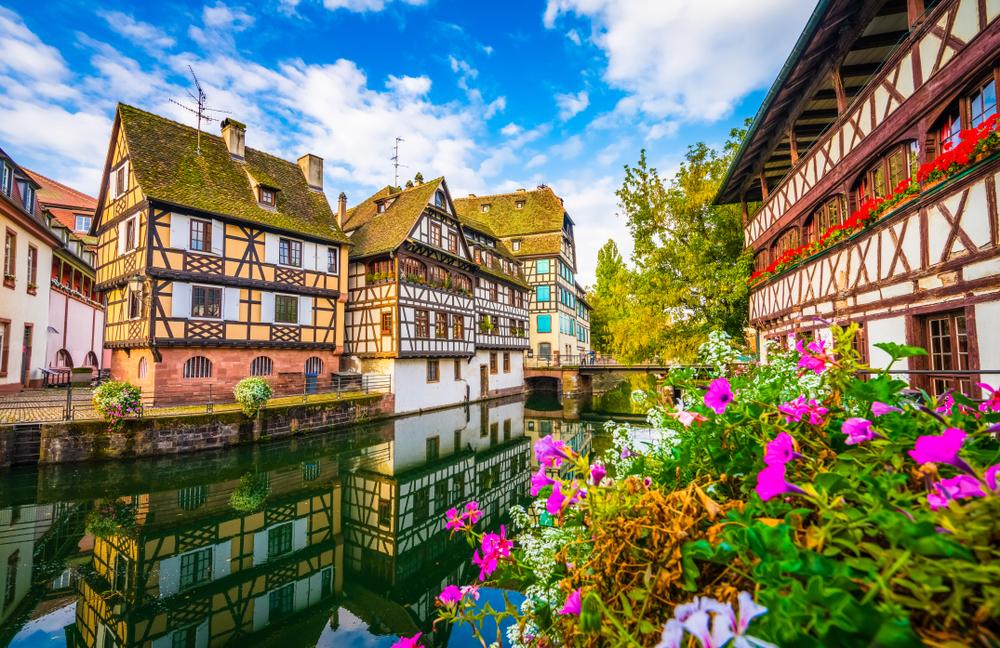 In addition to boasting some of France’s finest white wines, Alsace is also the country’s predominant beer-producing region. Strasbourg is the beer production center in Alsace, housing Heineken, Karlsbrau, Kronenbourg, and countless microbreweries. The region’s food highlights rustic dishes and elegant gastronomy and is home to the most Michelin-starred restaurants in France. Alsace cultivates most of France’s asparagus known as Les asperges d’Alsace. While white asparagus is a particular delicacy, Alsatian cuisine also includes potatoes, cabbage, sauerkraut, eggs, pork as stables. Occasionally, dishes are prepared with lentils, a poached egg and served with sliced pork.

When visiting Alsace, enjoying an authentic Alsatian meal at a winstub is essential. A winstub, which translates to wine lounge, was originally a room for public use where winemakers could sell the surplus of their annual production. Today, they’re more like rustic restaurants where you can savor your meal sitting elbow to elbow at wooden tables with checkered tablecloths. Wine is served from carafes, and the meals are simple, straightforward dishes like choucroute garnie and baeckeoffe.

For an alternative authentic Alsatian dining experience, head to a farm inn amongst the Vosges Mountains for a repas marcaire meal. This culinary tradition is typical of the Munster Valley and includes Munster cheese, soup, or a meat pie. Roïgabrageldi is also served, a heartwarming dish of potatoes cooked in butter and lard served with smoked pork meat. A repas marcaire offers a simple yet replenishing meal ideal for filling up after a long hike through the Vosges.

With Cellar Tours, you can explore this incredible region of France, discovering its charming villages and towns, its unique cuisine, and wines on an Alsace Food and Wine tour. The charms of Alsace – its gorgeous landscapes, hilltop villages, and excellent gastronomy, to name but a few – are innumerable and irresistible.

With grapes like Riesling, Gewürztraminer, and Muscat, there are several aromatic white Alsatian wines to choose from for l’aperitif. For something more festive, reach for a Crémant d’Alsace as an affordable sparkling wine made in the traditional method like Champagne. For l’aperitif, pretzels or bretzels are commonly enjoyed alongside a glass of bubbly or a frothy beer. The bow-shaped bretzels are baked until golden brown and salted. Alternatively, you’ll find pretzels topped with cumin seeds, minced onions, or smoked salts. They’re frequently served at local bakeries or in bistros and bars.

What to Order for L’Entrée in Alsace 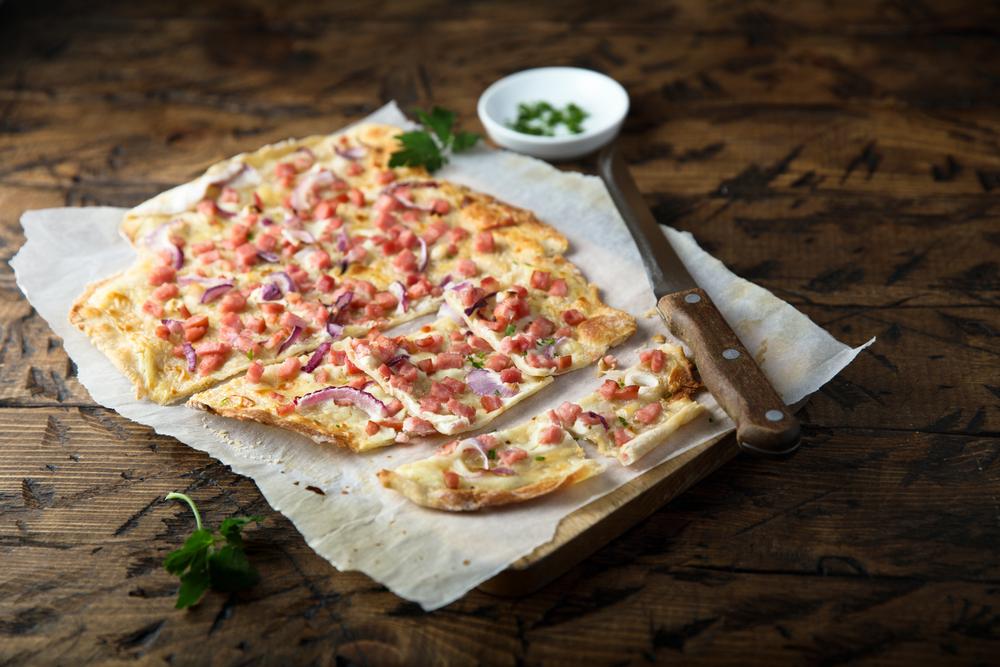 Also called a tarte flambée, Flammekueche is one of the most popular entrees in Alsatian cuisine. Appropriately named flame cake, flammkuchen is a thin, crispy, rectangular flatbread traditionally cooked in a fire-burning oven surrounded by flames. The tarte is prepared with Crème fraiche, thinly sliced onions, and crispy bacon top the tarte flambée, which makes the ideal match for any of Alsace’s white wines.

Tarte à l’oignon is made with a rich egg custard seasoned with salt, pepper, and nutmeg, along with onions and bacon. The savory tart resembles an open pie and is not quite as deep as a traditional quiche. Aromatic and savory, Tarte à l’oignon pairs deliciously with Pinot Blanc or a local Sylvaner. Supposedly, this onion tart was created by bakers who used it to test the temperatures of their ovens before baking bread. Thus, they’d know when the ovens were hot enough to start baking bread depending on the amount of time it took to cook the Tarte à l’oignon.

Alsace is famous for its charcuterie, and the region produces a wide variety of delectable saucisses or sausages. One of the most frequently savored sausages is called knack d’alsace, named for the crisp, popping knack noise they make when bitten into. Knack is made with pork, beef, and spices stuffed into natural casings and smoked over beechwood. Traditionally, knack d’Alsace is served with boiled potatoes, sauerkraut, and mustard.

A renowned delicacy of the region, Alsatian foie gras is a goose liver paté with a buttery texture and slightly sweet flavor. Jean-Pierre Clause created the original recipe for foie gras in 1780 for the military governor of Strasbourg in Alsace, made from the livers of force-fed geese; foie gras comes in various preparations from terrines to cans or an elegant mousse. Foie gras is often enjoyed on toasted bread sliced thinly and sprinkled with salt. 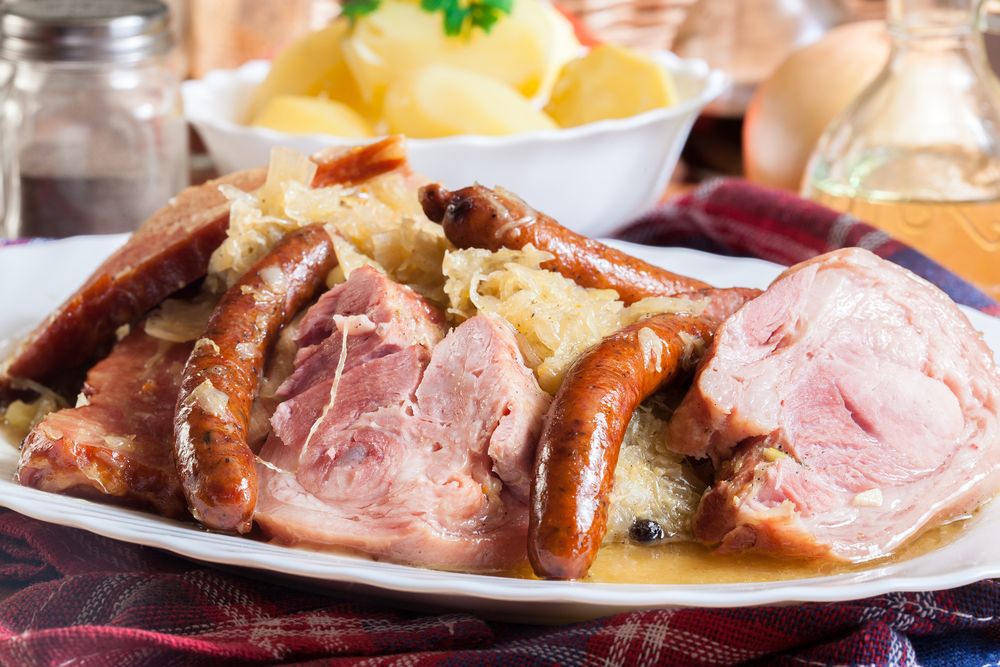 Baeckeoffe, also known as baekenofe, means baker’s oven and is a traditional recipe in Alsatian cuisine. The casserole is made with marinated meats; usually, pork, beef, and lamb layered with potatoes and onions, covered in local white wine, then baked. Traditionally, housewives would make the dish on Mondays when they were doing laundry at home. They’d prepare the baeckeoffe and leave their baking dishes at the local bakers in the morning to be cooked in his wood-burning oven. They’d pick up their cooked baeckeoffe when ready for the midday meal. Baeckeoffe is a seasonal staple more frequently enjoyed when temperatures drop in the winter.

Sauerkraut is a staple ingredient in Alsatian cuisine and claims a starring role in the regional specialty choucroute garnie. Choucroute is Alsatian sauerkraut or white cabbage that’s been shredded, salted, and fermented in wooden barrels. For the dish, the choucroute is marinated with juniper berries, cloves, bay leaves, garlic, goose fat, and Alsatian white wine, preferably Riesling. Ham hocks, sausages, and occasionally other meats like pork loin, pork shoulder, and smoked or fresh beef are added to the choucroute stock and cooked together. Then to serve the choucroute garnie, the sauerkraut is piled high accompanied by boiled potatoes and topped with the cooked pork and sausages. Savor this classic Alsatian dish with a dry Riesling or a local beer.

Pot au feu is another classic stew-like Alsatian dish made with meat and vegetables. It’s an ancient French peasant dish popular in the winter, and the name translates as ‘pot on fire.’ Historically, peasants would make pot au feu with lesser cuts of meat cooked in a pot over an open flame. Then, the meat is cooked with whatever vegetables they had available, such as potatoes, carrots, onions, and turnips.

Pot au feu cooks long and slow over low temperatures. As the broth boils down, it becomes more flavorful and concentrated. Traditionally, the broth is served first, followed by the meat and vegetables. In Alsace, pot au feu is typically served with a creamy horseradish sauce.

Truite au bleu is made with trout from the rivers and lakes of the Vosges Mountains. After gutting the fresh fish, the trout are soaked in vinegar, which turns the trout blue due to a reaction between the vinegar and exterior mucus on the trout’s skin. Next, the fish is boiled in court-bouillon, which includes carrots, sliced onions, bouquet garni, vinegar, and wine. Once cooked, truite au bleu is served with steamed potatoes, melted butter, and ideally a lively, mineral-driven Riesling. 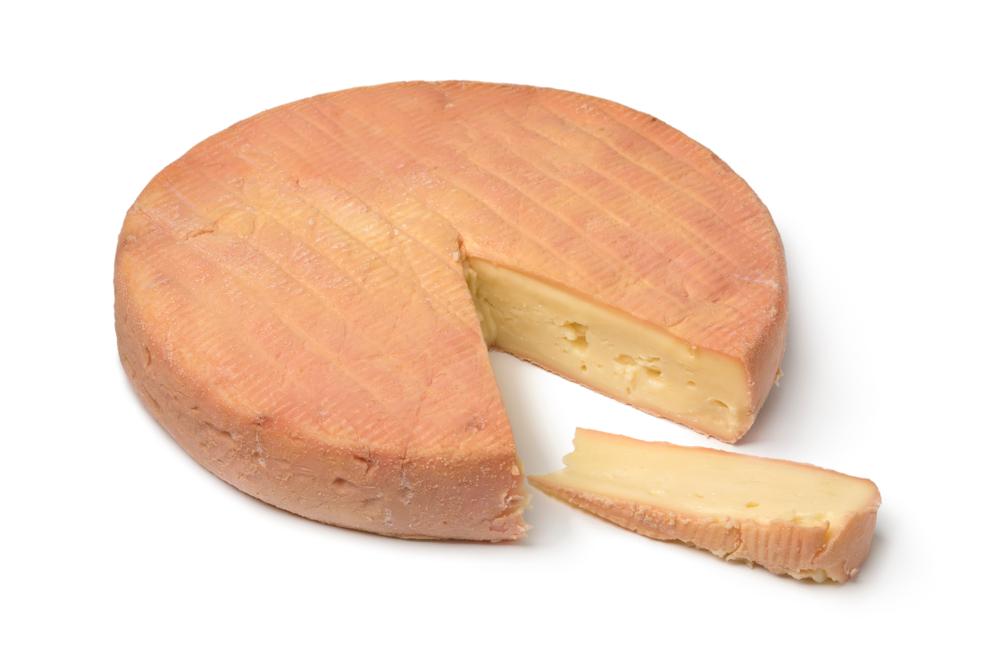 Munster is the most widely savored cheese in Alsatian cuisine. This French soft, washed-rind cheese is made with cow’s milk who graze in the Alsace, Lorraine, and Franche-Comté regions. The cheese is named for the town of Munster in the Vosges, where abbeys and monasteries first made it during the Middle Ages. In Lorraine, Munster cheese was formerly known as Géromé until the cheese received protected AOC status in 1978, formally designating the cheese as Munster and Munster Géromé.

Under the AOC, Munster must be made from raw, unpasteurized cow’s milk. The washed rind process creates a slightly red-colored rind, which protects the cheese and contributes a robust and tangy flavor for which Munster is known.

Here are a few other Alsatian cheeses to try: 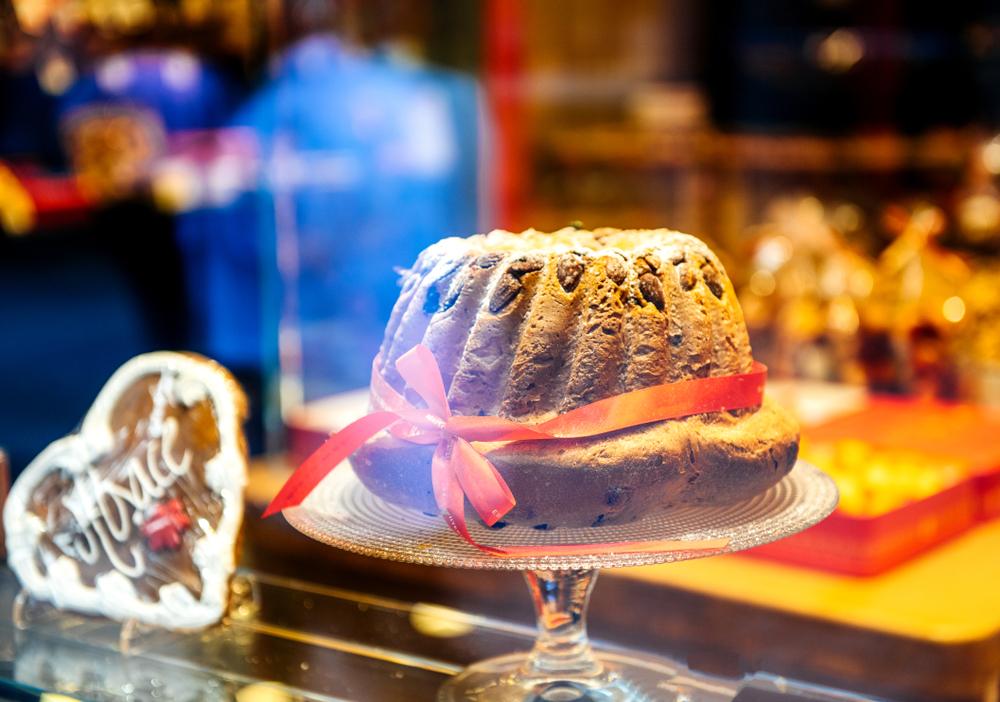 Fruit tarts are frequently enjoyed for dessert in Alsatian cuisine. Tarte aux fruits is simple to prepare and incredibly delicious, made with apples, pears, rhubarb, cherries, or plums. First, the dough for the tart is made with flour and water, margarine, and sugar. Next, the pastry is filled with sliced fruit covered in a custard made of eggs, sugar, vanilla, and cinnamon, then baked.

Kougelhopf is a yeast-risen cake dotted with raisins baked in an earthenware mold to create its signature tall shape. Sliced almonds are sprinkled in the molds before pouring in the batter. The final kougelhopf is topped with the almonds, then sprinkled with icing sugar.

Bredele is baked around Christmas time in Alsace. These small biscuits or Christmas cookies come in various flavors, including lemon, honey, and almond. The first Bredele was created in the 14th century. They became more festive and decorative in the early 19th century when cookie cutters were introduced into the kitchens of Alsace.