Certain grape varieties, such as Cabernet Sauvignon, always elicit a smile from sommeliers, winemakers, and oenophiles. Its ability to produce some of the finest and long-lived red wines in the world is unquestionable. Loved and adored by millions, this noble red grape variety can scarcely put a foot wrong.

And then there’s red grape varieties like Carignan. Known as Cariñena and Mazuelo in its birthplace, the Iberian Peninsula, Carignan was once used in almost every red wine made in the South of France. Growers looking for a quick and easy buck marveled at the variety’s tolerance of heat, not to mention Carignan’s tendency to crop at inflated yields. Nevertheless, it was mostly regarded as a pedestrian, high-volume workhorse. That fact, and that fact alone, ensured that this often-maligned red grape was ubiquitous across the Languedoc-Roussillon.

However, fashion swung in the other direction towards the end of the 1990s, as producers focused on quality, not quantity. Generous EU grants encouraged growers to grub up their vines. At the same time, few people were interested in replanting the variety in the 21st century, instead focusing on trendier names like Grenache and Mourvedre. As a result, the total acreage declined by almost 50% over 15 years. For a time, it seemed like Carignan would fade into complete obscurity. 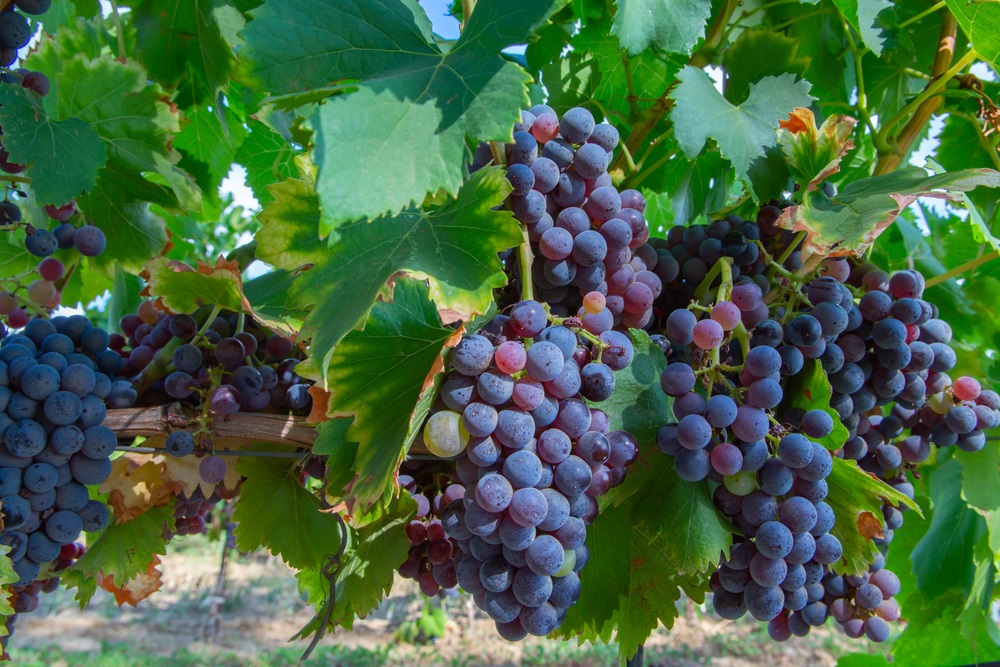 Yet winegrowers have kept the faith, taking a new approach to the grape. Many of the remaining vineyards in the South of France are planted with very old bush vines – open-minded winemakers have successfully exploited this. Centenarian plantings of Carignan, combined with a deft touch in the winery, can result in complex, structured, and concentrated red wine. More and more producers realize this, which can only help to augment the grape’s stubborn reputation for poor quality.

It is widely agreed that Carignan originated in Spain, or more precisely in the north-central region of Aragon. The province surrounding Aragon’s capital Zaragoza has a town called Cariñena – the most compelling piece of evidence frequently referred to by viticulturists and historians. The kingdom of Aragon controlled an expansive empire in the 15th century, encompassing the Balearic Islands, Corsica, southern Italy, and Sardinia. Known as Bovale di Spagna in the island of Sardinia, Carignan was likely exported by merchants in the 1400s – or possibly earlier. The grape then found its way to North Africa, spreading to the Languedoc-Roussillon in southern France. After phylloxera destroyed growers’ livelihoods throughout Western Europe in the 19th century, Carignan played a key role in the French replanting program. Taking to American rootstock with ease, its popularity was reinvigorated in the early 20th century, and by the 1980s, there were over 160,000 hectares cultivated in southern France.

Meanwhile, growers across Spain were taking to Carignan with relish, their excitement buoyed by the reliably high yields. Today, Carignan is found in Aragon, Catalunya (it shines in Priorat), Castilla y Leon, and Rioja, where it is known by its synonym Mazuelo. Moreover, despite the cull of recent times, it remains a relatively common sight in the vineyards of the Languedoc-Roussillon.

The subject of Carignan’s parentage has been hotly debated. In 2006, scientists uncovered evidence of a parent-offspring relationship between the grape and Rioja’s Graciano – it is unclear which role is assigned to which variety! However, other experts have debunked this claim, arguing that the DNA profiles of Carignan and Graciano are too distinct to merit ancestry. Many scientists believe that two unknown varieties interbred, eventually resulting in Carignan. The grape’s exact genetic origins remain, for the moment, an enigma.

But it is likely that Carignan’s parents were two very robust yet challenging grape varieties to cultivate. Although it has been exploited ad-infinitum for its generous crop sizes, growing Carignan is far from a walk in the park. Indeed, winegrowers have been known to tear their hair out before the harvest has even begun. For a start, Carignan is a very late budding and ripening variety – it is often the last red grape to be harvested in the Languedoc-Roussillon. If the weather turns inclement in early autumn (it can happen, even in nominally dry areas like southern France), then the grower can face a deluge of rot during the harvest. It requires a long and dry growing season to achieve good levels of phenolic ripeness and constant pruning to avoid dilute, oversized berries; the hard work involved cannot be underestimated.

This reaches a climax when it is time to pick bunches off the vine. Although Carignan bush vines are a precious resource that deserves to be safeguarded, managing them can be an expensive headache. Machine-harvesting is almost impossible in this case, as Carignan is blessed with extremely tough vine stems that damage the equipment. Therefore the grower must go to the expense of hand-harvesting; not everyone is thrilled about that. Moreover, Carignan is susceptible to powdery mildew and pests like the Grapevine Moth.

Of course, it should be noted that all the world’s best wines are based on hand-harvested fruit. Despite the popular misconception, if the grower has done their work and delivered a small crop of ripe grapes, the winemaker has promising raw materials to play with. High-quality Carignan is packed full of tannin, coloring compounds, and acidity – essential components that provide the backbone to all good red wine intended for aging. However, it requires meticulous and precise treatment in the cellar, not least because Carignan’s powerful – and occasionally astringent – tannins can subjugate the fruit.

Certain producers advocate using carbonic maceration (a technique used in Beaujolais that involves two concurrent fermentations) to craft a wine with approachable, soft tannins. In contrast, others engage in standard, but very gentle fermentations and macerations, adding varieties like Grenache and Syrah to moderate Carignan’s more ‘wild’ tendencies. It must be said that 100% varietal Carignan is quite rare; many oenologists regard the grape as a blending material. The grape can withstanding an uprisings amount of maturation in new oak, although too much can again subdue the fruit.

Mono-varietal Carignan, although seldom encountered, can be an absolute joy to taste and share with friends. Yet, it stands alone in a world defined by increasingly homogenized wine styles. Full-bodied and deeply colored, Carignan is notoriously reticent to release its aromas – even after prolonged aeration! But persevere, as you’ll be rewarded with a delicious palate of wild black fruits, white pepper, licorice, thyme, and rosemary. If managed judiciously in the fermenter, the tannins should be simultaneously grippy and ripe, while Carignan’s fresh acidity makes it an excellent accompaniment to casseroles and richly-flavored meat dishes. The best examples are every bit the equal of single-varietalGrenache, although the latter grape has an undeniably stronger following among the wine community.

Carignan’s future in the Languedoc-Roussillon 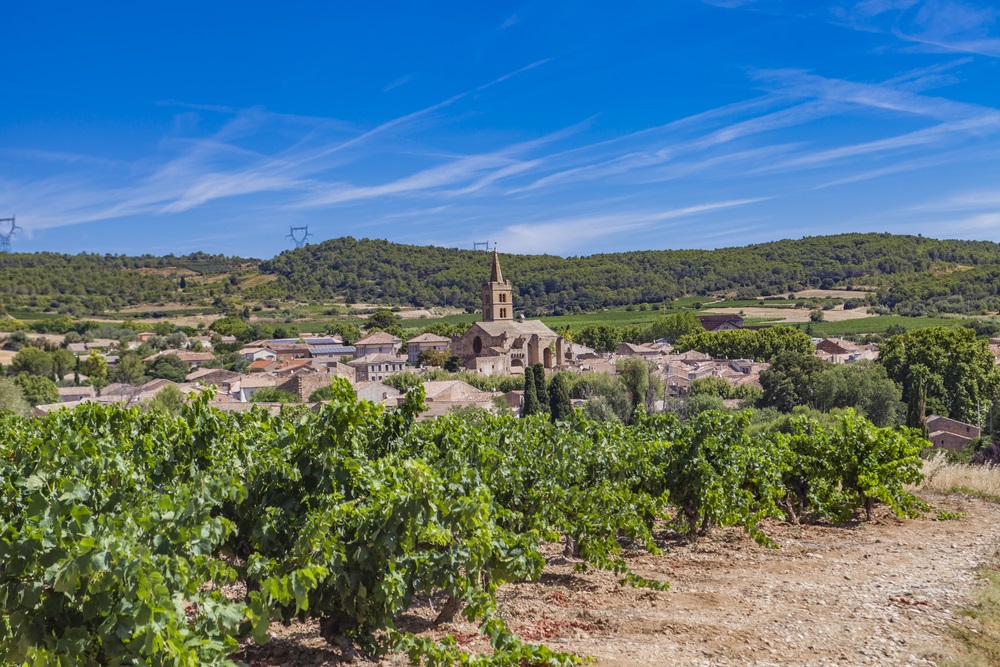 The Languedoc-Roussillon is a viticultural paradise. It offers growers an incredible variety of terroirs, micro-climates, elevations, and aspects. Furthermore, there is a soil type to suit every variety: clay, sand, limestone, schist, marl, sandstone, and alluvial gravels. In addition, the climate is Mediterranean, with typically hot, dry summers and mild winters. Therefore it is little wonder that certain individuals have found single-site vineyards that can produce the finest Carignan wines being made today.

Alain Grignon is one such advocate of Carignan, located in the Pays d’ l’Hérault zone in the Eastern Languedoc. Made using top-quality fruit harvested from old vines planted near the village of Cruzy, the wine is outstanding – and of great value. It is rich, complex, and very powerful; it is the ideal candidate for overturning ingrained prejudice about this misunderstood grape.

Elsewhere, Carignan is a component of Grenache/Syrah blends made in a number of diverse appellations. On the rocky, garrigue-covered hills of Cevennes, centenarian bush vines are yielding small amounts of powerful fruit. Minervois has traditionally been used to add color and weight, although some estates are phasing it out in favor of more Cinsault and Mourvedre.

Winegrowers in Corbieres have a similar longstanding love-hate relationship with Carignan. The best terroir is undoubtedly the sub-zone of Boutenac, situated to the north of the appellation boundaries. In the sandstone hills of the area, baked in Mediterranean sunlight, Carignan thrives and ripens to high levels of alcohol and tannin. Some of the low-yielding bush vines are more than 100 years old. Nevertheless, the concentration found in the berries has no rival anywhere in the region.

Carignan also plays an essential role in the red blends of Fitou. It grows particularly well in the Fitou Haut zone, mountainous schist located 15 miles inland from the coast. Old vines have to dig deep to find nutrients in the increasingly torrid summers, which helps the flavor and tannin development. When blended with Syrah and Grenache, the wines have an alluring potency and intense spicy fruit, offset by Carignan’s naturally high acidity. Such qualities help keep the wines fresh and avoid tipping over into jammy excess.

That observation brings us nicely onto the subject of climate change. Growers in the Languedoc-Roussillon look nervously at rising temperatures and alcohol degrees. In many parts of the Corbieres appellation, drought and concomitant hydric vine stress are becoming a recurring problem during the summer season. In particular, Syrah can produce very coarse and alcoholic wine in these conditions. More than ever, winegrowers need varieties that withstand the heat and produce wines with good acidity, even at high levels of ripeness. Carignan is one such grape variety. For that reason alone, it is bound to enjoy a growing resurgence in the decades to come.