We cannot overestimate the role that Aragonês (Tempranillo) has played in the development of Spain’s burgeoning wine industry. Its approachable tannins, silky texture, and strawberry fruit profile have won over oenophiles from London to San Francisco. It was largely responsible for putting Spain on the international red wine map in the 20th century. It is universally adored and respected.

Yet this iconic red grape is known by many names, exploited for a wide variety of purposes. As Tinto Fino – or Tinto del Pais – it is responsible for the powerfully concentrated wines of Ribera del Duero and Toro in Castilla y Leon, usually marketed as a single-varietal style. In the Rioja region, it was traditionally blended with three other varieties to produce medium-bodied and elegant reds for long aging. In Navarra and Catalunya, the grape continues to grow in popularity, sometimes blended with Bordeaux varieties in the former region. 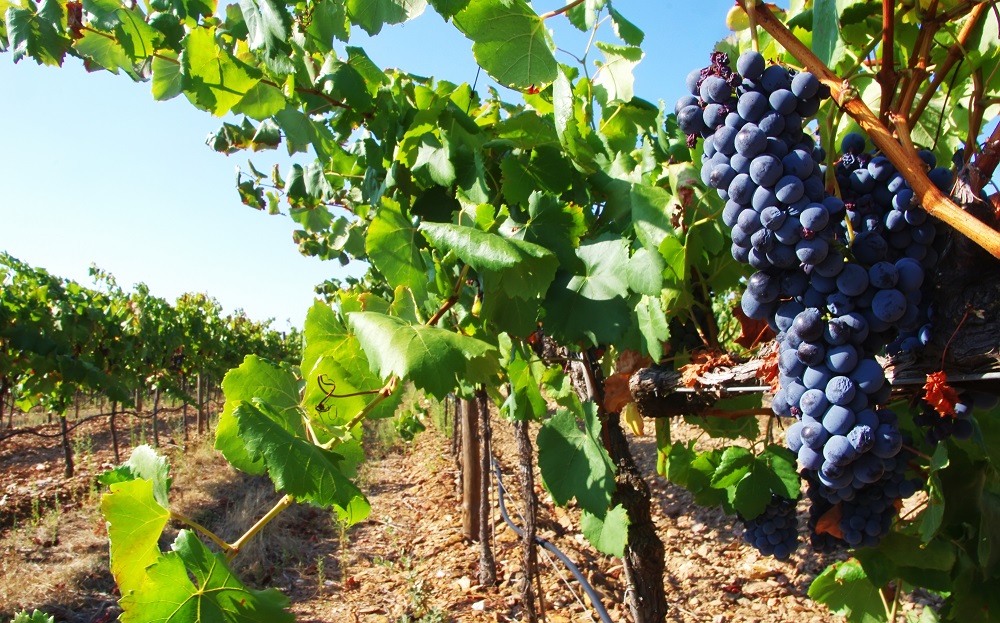 However, Aragonês is an equally important part of Portugal’s viticultural landscape. Although consumers may overwhelmingly associate the grape with Spanish appellations, it has long played a vital role in the production of port (the local synonym is Tinta Roriz), while single-varietal wines from Alentejo are most definitely in vogue in the bars and restaurants of Lisbon. For sure, Portugal has some catching up to achieve global recognition for its delectable Tempranillo wines. But there is no questioning the outstanding potential of the nation’s eclectic terroirs or the passion and talent of its winemakers. When they join forces, magic happens.

Is Aragonês indigenous to the Iberian Peninsula? The short answer is: we’re not sure. Several theories regarding the grape’s origins became prominent in the 1900s, only to be debunked by scientific research. One of the most charming involves a Cistercian monk who supposedly visited Spain in the Middle Ages. Taking a pilgrimage to Santiago de Compostela, the monk is said to have left vine cuttings at monasteries across northern Spain, including Aragonês. It’s a lovely romantic tale with no basis.

Nevertheless, some winegrowers will insist that Aragonês has been grown in Spain for many centuries. Viticulture arrived via the Phoenicians, who established a Mediterranean trading empire long before the Romans ever conquered the Peninsula. Aragonês may be a genetic descendant of the first Vitis vinifera species brought to western Europe by this ancient civilization. A mutation could have occurred in the past, creating what became known to the Spanish as Tempranillo.

Popular consensus, however, points towards the importation of Aragonês from South America. This is certainly very plausible, as the Spanish sent armies of men to conquer nations like Mexico and Argentina, bringing back valuable commodities such as gold, cocoa beans, and vine species. Moreover, scientific analysis has shown that Aragonês has a very close genetic relationship to Criolla, a family of grape varieties native to Argentina. As a result, the grape was widely exported during the early 20th century and planted in Australia, California, Oregon, and Mexico. But, of course, both the Spanish and Portuguese insist that only the Iberian Peninsula can produce world-class expressions of the grape, whether it is called Aragonês, Tinta Roriz, or Tinto Fino.

But despite a multitude of synonyms, most growers refer to the variety as Tempranillo. Interestingly, the etymology is somewhat misleading; the name Tempranillo derives from Temprano, the Spanish word for early. However, the grape will often reach full phenolic ripeness in late September or early October if the weather is unseasonably cool. If left unchecked, the vines can produce a significant yield of large berries, which is not conducive to quality winemaking. To avoid overinflated crops, the grower must regularly prune throughout the season, particularly in July and August.

Site selection is of the utmost importance when cultivating Tempranillo; the grape thrives on cooler sedimentary soils and calcareous terroir. Achieving a balance between warmth and moisture is crucial, as an excess of the former leads to hydric stress and desiccated berries with unwieldy alcohol and harsh tannins. Yet prolonged rain can encourage the grapes to balloon in size, resulting in dilute, acidic wines.

Fortunately, both Portugal and Spain offer terroirs ideally suited to growing Tempranillo. It tends to yield the finest wines in warmer climates, especially if the vineyard is planted at higher altitudes, providing all-important diurnal temperature variation. If there is just enough rainfall, superlative quality will emerge from the grapes packed full of anthocyanins and flavor compounds. Across the Iberian Peninsula, winemakers continue to fetishize old bush vines, as they can yield a small crop of exceptional quality berries. Regrettably, Tempranillo is very susceptible to diseases and various maladies, including powdery mildew and grey rot. Only vigilance and superior terroir will unlock the full potential of Tempranillo. All else is window dressing.

In the late 20th century, Riojan winemakers had a crisis of confidence. The period was marked by over-production and falling demand, while ripe and fruit-driven New World brands stole a march across much of western Europe. This spurred a dramatic re-evaluation of how best to handle Tempranillo in the winery. Historically, Rioja was subject to a relatively gentle maceration and aged for several years (sometimes 6-7) in old barrels, producing a very mellow and softly structured expression of the grape. The only problem is that the fruit would often dry out, creating a monotone style of wine. So progressive wine estates started cutting yields and harvesting healthier grapes while embracing longer maceration times and maturation in French barrique. What emerged continues to shock the traditionalists: a ripe and concentrated style of Tempranillo, with good structure, deep color, fresh acidity, and depth.

In contrast, Portuguese growers have always stuck to their guns, as far as Aragonês is concerned. Excluding the grape’s important role in port production, the vast majority of table wines are simultaneously dry and fruit rich – a world apart from the classical Rioja style of the 1980s. Moreover, winemakers in the Douro and Alentejo generally prioritize fruit quality above the softening effects of slow oxidative aging, albeit oak is widely used across Portugal. The key difference is the length of maturation; most wines will not see more than 16-18 months in barrel.

As a table wine, Aragonês frequently appears as part of a blend in Portugal, although single-varietal cuvées are becoming more trendy with younger oenologists. The best labels showcase a tremendous balance between oak and fruit, with enough structure and grip to age for many years. However, they are rarely inaccessible or overly tannic. This is achieved via several means. Firstly, conscientious properties will only use the finest berries, hand-harvested and stratified, using a rigorous sorting process in the winery. Certain producers continue to use the traditional method of foot-stomping in Lagares to extract color and flavor from the skins, arguing that there is no substitute for the human touch. Others prefer to use automatic crushers/rollers before fermenting the wines at relatively low temperatures in stainless steel. Automated pistons are becoming more widespread in Portuguese wineries, programmed to punch down the cap at precise intervals. But traditional pump over is also widely practiced.

Top-quality wines are then aged in wood or another vessel before release. Although many winemakers favor using French wood, some leading cuvées are matured in a mixture of American barrels and French barrique to harness the benefits of both. American oak tends to be dense wood lacking in porosity, while the barrel staves are typically cut thicker than equivalent oak from Europe. This ensures the wine matures more slowly – French barrique offers greater tannin and texture impact. A 50/50 split, or near enough, is the usual goal.

Thirty-five years ago, Portuguese table wines were generally held in low esteem. A lack of investment, allied to rustic winemaking and poor viticulture, did little to further the country’s reputation on the global stage. Thankfully, an influx of talent and capital in the 1990s changed the nation’s wine scene beyond recognition. Today, Portuguese labels are found in many leading restaurants, encompassing saline whites, exotic reds, and superlative fortified wines. 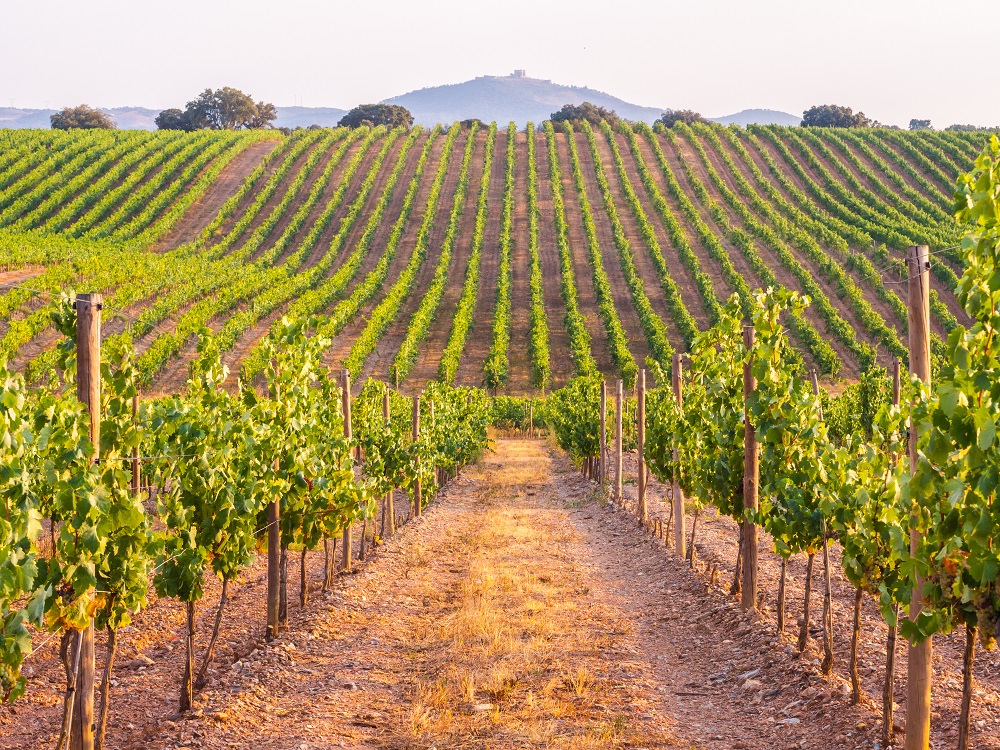 The massive popularity of Tempranillo has played no small part in raising Portugal’s profile abroad. Although the grape is found across the country, most critics regard the Douro Valley and the Alentejo region as the most reliable sources of premium labels. Yet notable stylistic variances emerge in your glass, making exploring Portuguese wine all the more enjoyable!

In broad strokes, attitudes to winemaking are quite similar in both vineyards. Temperature-controlled fermentation is widely practiced, as is maturation in wood. So, in this case, the differences arise from terroir and climate; Alentejo and the Douro Valley are worlds apart in some ways. The latter region has long been associated with port – dry red and white styles were once an afterthought, made from discarded leftovers. But no longer; table wines have become so commercially important that producers now demarcate vineyards for the specific purpose of marketing an alternative to port. High altitude and north-facing sites are particularly suitable to ensure that the grapes retain enough acidity at harvest time (summers can be long and very dry).

Nevertheless, well-drained schist and granite terroir create Tempranillo wines with poise and a nervy tension – an effortlessly sophisticated interpretation of the grape. Port houses are equally committed to Tinta Roriz, as they call it, used to add fruit and complexity to their diverse range of fortified wines. As a result, there is rarely a bottle of vintage port that does not contain at least some Tempranillo.

Flip the coin to Alentejo, and something more opulent and meaty will likely grace your table. Local table wines reflect the realities of growing grapes in an extremely dry and hot climate, with scant rainfall in the summer months. Indeed, achieving good ripeness levels can be all too easy in the vineyards south of Lisbon; constant vigilance is needed to guard against fierce alcohol and unwieldy tannins. But in the right hands, Alentejo can produce excellent reds from the Tempranillo grape, brimming with power and exoticism. They may occasionally lack the saline freshness of the Douro, but the compensations speak for themselves. These are gloriously hedonistic wines, ideally paired with meat cooked on the “Churrasco.” On a warm summer’s evening, few gastronomic experiences are more memorable than Portuguese BBQ and Aragonês.