La Rioja is one of Spain’s most esteemed wine regions famous for velvety, robust red wines made predominantly with Tempranillo. The region has captivated the palates of collectors, aficionados, and newly-initiated wine enthusiasts for decades. Typically, exceptional cuisine abounds where outstanding wines are made, and the La Rioja region is no exception. La Riojan cuisine relies on a wide range of high-quality products from its diverse landscape and climate. The region consists of mountainous terrain in the foothills of the Cantabrian Mountains and lowlands near the Ebro River. Each area originally offered its distinctive cuisine, but it became more integrated when people emigrated to larger cities. The Ebro River running throughout Rioja made the region a land of travelers and transit, resulting in a rich and varied cuisine. 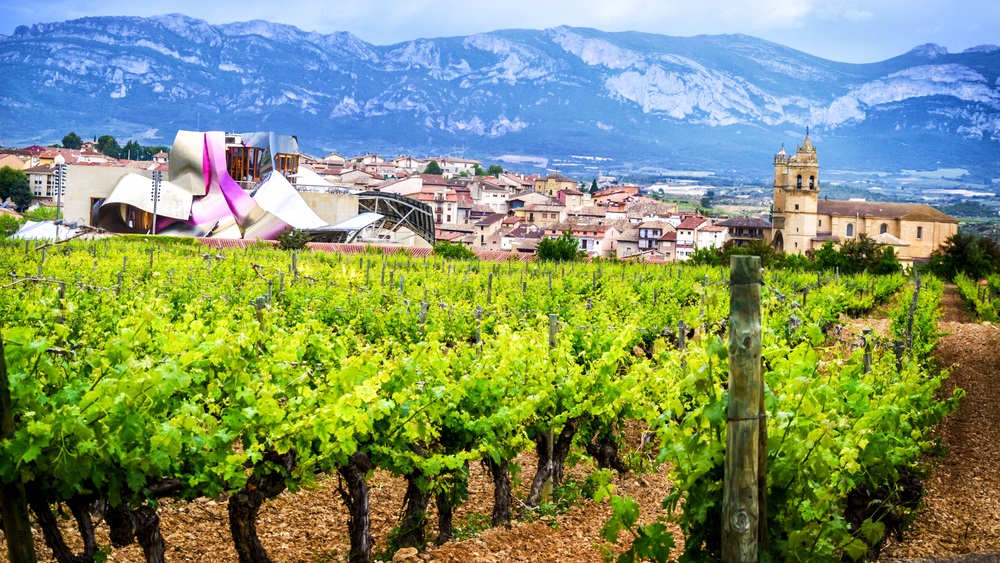 The Basics of La Riojan Cuisine

La Riojan cuisine relies heavily on a large assortment of locally grown vegetables and fruits. In Calahorra, there’s even a week-long festival dedicated to vegetables at the end of April called the Gastronomic Vegetable Days. Popular produce in Rioja includes tomatoes, peppers, asparagus, artichokes, mushrooms, lettuce, and chard. However, tomatoes and peppers are two of the essential ingredients in La Riojan cuisine.

Najerano peppers, green peppers, and dried peppers are all widely used, but piquillo red peppers are the favorite in Rioja. Piquillo peppers are often roasted, exuding an enticingly sweet aroma into the air. They’re peeled before eating and served with salads, alongside grilled meats, or made into a classic Riojan pincho or tapa called pimiento relleno. For the latter, the piquillo peppers are stuffed with codfish or minced meat, bechamel, and tomato sauce, then doused in batter and fried. Foodies who enjoy some heat can look to the alegrías riojanas, spicy peppers named Riojan jollies for the sharp kick they give to the palate. In contrast, tomatoes are the main ingredient in a quintessential Riojan sauce called tomatada. This sauce is served on fish, meat, eggs, and crab.

Beyond peppers, Riojan recipes often include artichokes and asparagus. The Blanca de Tudela artichoke variety is prominent in Rioja and enjoyed whole, steamed for salads, grilled, fried, or included with other ingredients in dishes like vegetable menestra. Asparagus grows throughout Rioja, but those from the Cidacos Basin are recognized as the highest quality. Both white and green asparagus may be included in salads or cooked and served with olive oil, vinaigrette, or mayonnaise.

Unique to the Ebro Valley, borage is an edible plant with bright blue flowers usually served with potatoes, olive oil, and sautéed garlic. Cardoons are also popular and traditionally served on Christmas Eve during the winter.

Riojan chefs are masters at preparing succulent meat-based dishes. Pork and lamb are the primary meats featured in La Riojan Cuisine, though some beef is enjoyed, too. Pigs have always grazed freely amongst the foothills in Rioja and are also farm-raised. Riojan chorizo, which comes in spicy and non-spicy styles, is made from pork and produced in the mountainous zones of the region. In contrast, lamb is thought to have arrived in Rioja with the Muslim conquest in the 8th century.

Even though Rioja is not situated along the coast, fish dishes feature heavily in the region’s traditional cuisine. Expect to see salt cod, sea bream, bonito, hake, mackerel, and even clams and crab on the menu.

Stews and Legumes in Rioja 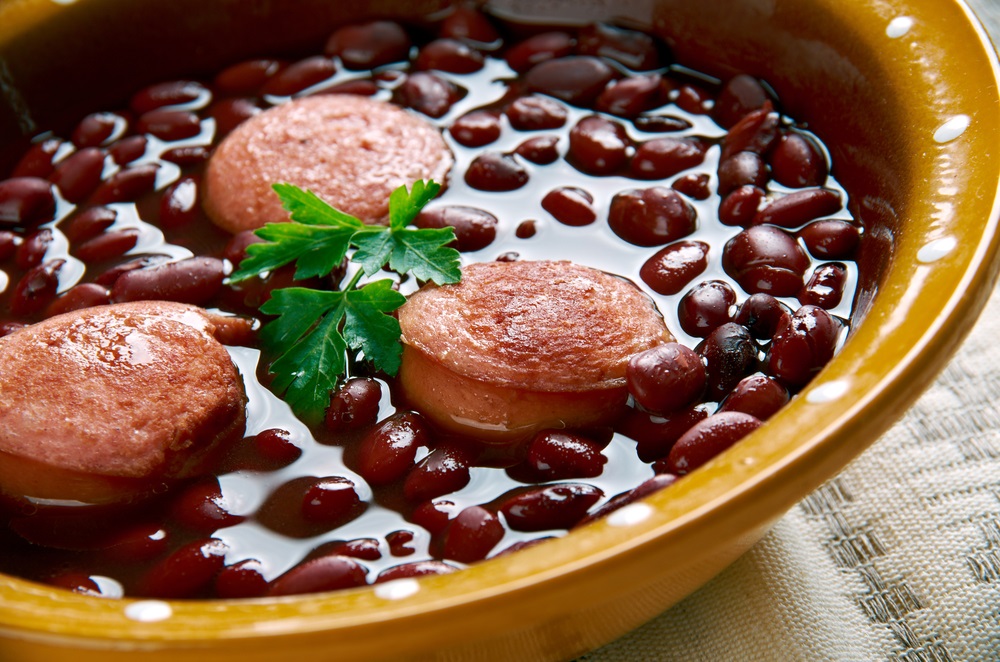 Both legumes and stews are a staple in La Riojan cuisine. White beans, pochas, and caparrón beans are the legumes frequently included in Rioja recipes. Caparrón beans are a type of red kidney bean and the main ingredient in a hearty stew called caparrones. To make the stew, beans are first soaked in water, drained, and then slowly simmered with pork rib, bacon, chorizo, pig trotters, ears, and tail. Once the beans are tender, the pork is removed and eaten separately after the beans. Rioja Crianza is the ideal Spanish red wine to pair with caparrones. These wines see less oak aging and deliver vibrant red fruit flavors for a delicious contrast to the savory stew.

A fresh white bean stew is a classic winter dish in homes throughout Rioja. It’s made with pochas beans known for their smooth, buttery texture. Pochas are cooked with lamb shoulder, water, onion, garlic, pimenton (paprika), bay leaves, green peppers, and Riojan chorizo. The wine’s nutty flavors and full body are an excellent match for the creamy pochas beans.

Additionally, ranchos or calderetas are rustic stews prepared in a traditional iron pot with potatoes and whatever other ingredients the chef has on hand.

Olive oil is an essential ingredient in the Riojan kitchen. The region’s extra virgin olive oil called Aceite de la Rioja is made from olives including the Redondal, Picual, Cornicabra, and Arbequina varieties. Riojan olives are known for their fruity yet bitter taste with almond, citrus, and grass hints.

Cheese lovers should be sure to try the local camerano cheese while in Rioja. This goat’s cheese has been made in the Sierra de Cameros for over 700 years, where the goats graze as they travel between the valley and mountains. Camerano cheese is made with goat rennet and shaped by stackable molds. It comes in fresh, cured, and semi-cured styles.

For those looking for something different to sip on, try a glass of zurracapote. A Riojan take on sangria, zurracapote is a Spanish mixed drink made with red wine, sugar, lemon, cinnamon, and dried fruits. The most flavorful versions allow the dried fruits to macerate in the spiced wine for a few days before serving. 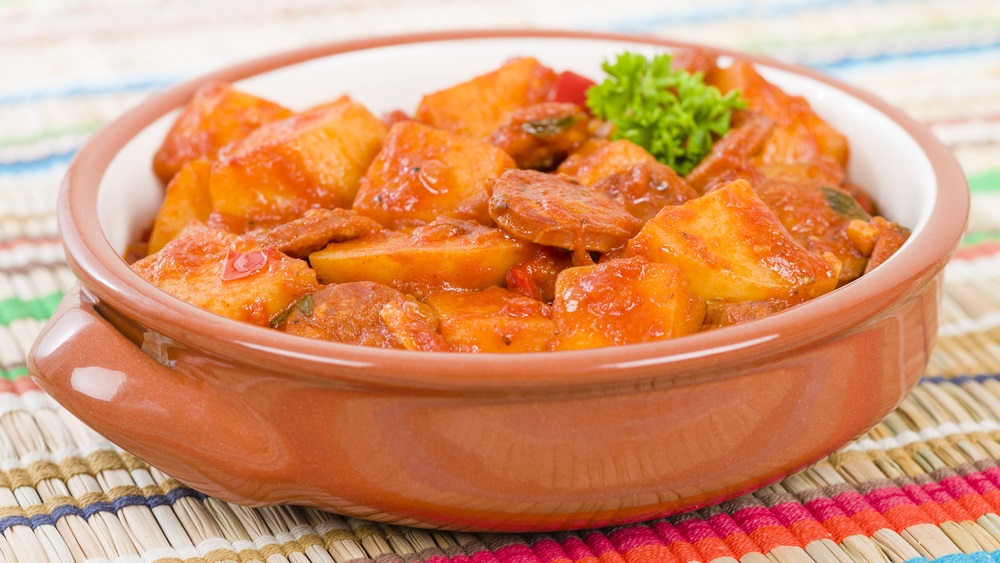 Patatas a la Riojana, a delicious potatoes based dish

Patatas a la Riojana is the region’s unofficial signature dish. These Riojan-style potatoes are prepared by sautéing onion with chopped fresh tomatoes. Next, peeled and diced potatoes are added to the sauté, followed by paprika, bay leaf, green pepper, and dried pepper. The mixture is covered with water and allowed to simmer for ten minutes. Then, chorizo is added and allowed to cook with the potatoes for around twenty minutes more. The secret to successful patatas a la Riojana is allowing the dish to rest, so the starched released from the potatoes has time to bind the sauce together. Rioja Crianza is the ideal wine to hold its own against the spices in this dish. A modern-style Rioja Alavesa is another exceptional match.

Vegetable menestra showcases the bountiful vegetables of the Rioja region. The vegetables included in the dish vary by season, but artichokes are almost always included. Chard, broad beans, green beans, peas, cardoons, onion, and asparagus are also typical of the dish. The vegetables are cooked separately and then sautéed with diced onions and ham. Some versions see certain vegetables breaded with egg and flour, then fried. Chicken stock is added towards the end of cooking for added flavor. A crisp, fruity Grenache rosé with lively acidity from nearby Navarra is a delicious pairing for vegetable menestra. 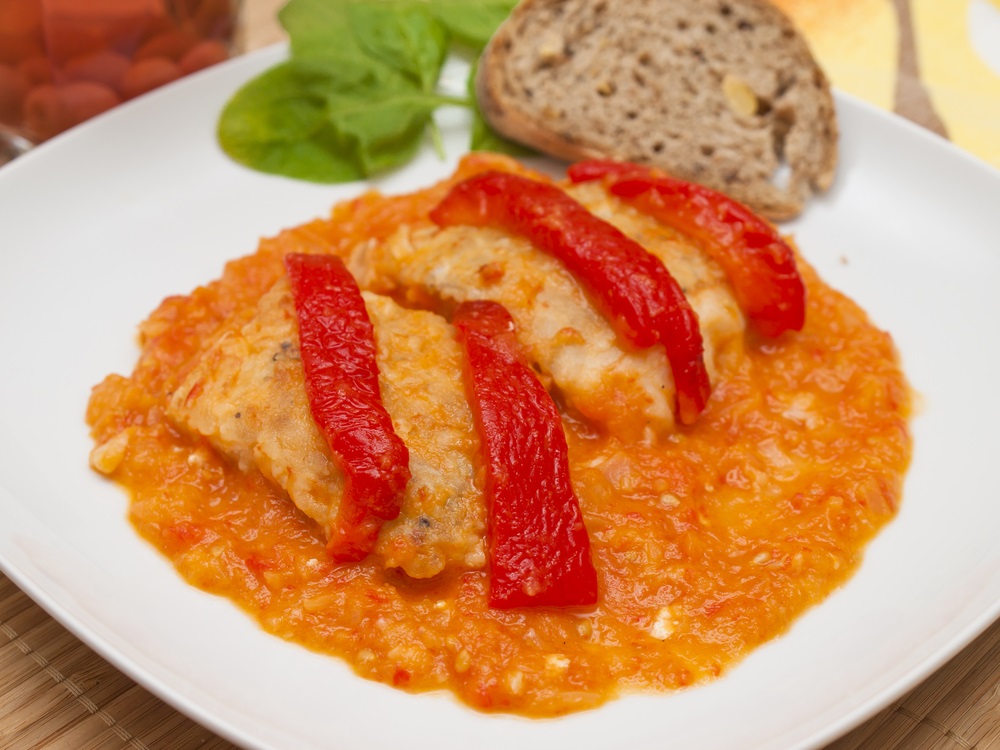 This classic Riojan dish (bacalao a la riojana) is made with salted cod that needs to be soaked for at least 24 hours, changing the water as needed. The dish’s flavorful sauce is made by sautéing diced onions with peeled and diced tomatoes. Some water, bay leaf, and spices are also added to the pan and simmered on low heat for two hours. Then, the sauce is blended. Next, dried red peppers called cristal or choricero peppers are rehydrated by heating them in a pan with oil and water. Next, the cod is dredged in flour and fried in garlic-infused oil. Finally, the tomato sauce and red peppers are poured over the fish, cooking together over low heat. Rioja Crianza is the best match for this cod recipe if drinking local. However, a Garnacha from Cariñena or Calatayud south of the Ebro with juicy red fruit flavors and refreshing acidity is an outstanding wine pairing for this Riojan-style cod.

Other fish specialties in Rioja include river crab (crayfish) prepared with fried vegetables, bonito a la Riojana doused in a similar sauce as the cod, and hake in green sauce. The latter sees the hake served with clams in a sauce of parsley, garlic, and asparagus. This dish calls for a crisp, vibrant glass of Albariño from Rías Baixas. 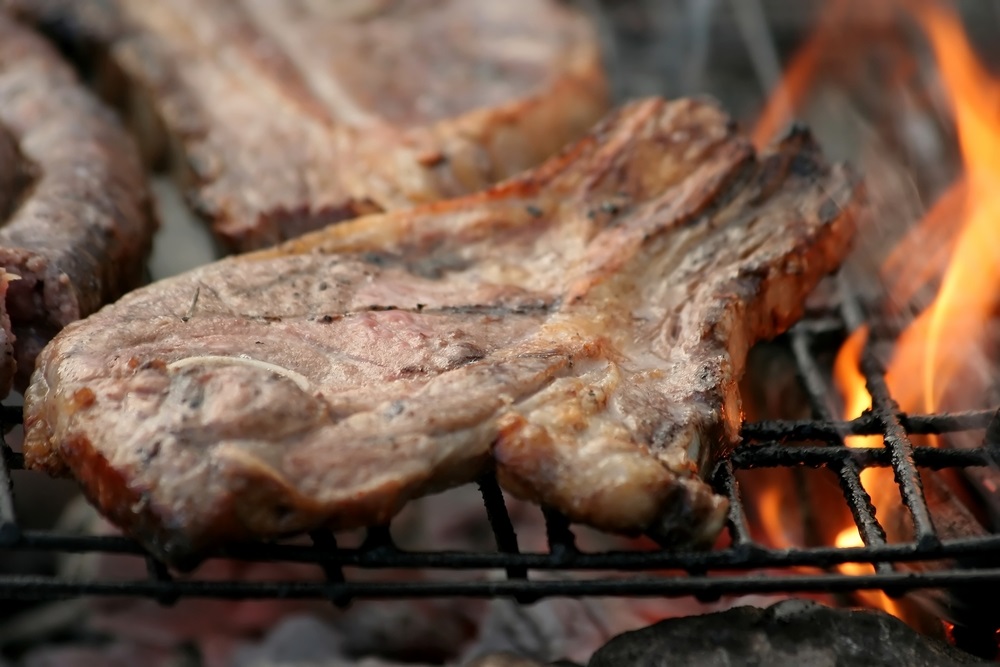 Lamb chops, known as Chuletillas de cordero al sarmiento, are a Riojan specialty and are typically cooked on the grill. However, they are grilled over vine shoots gathered after pruning the region’s countless vineyards for even more flavor in the winter. Simple in preparation yet bold in flavor, the strong taste of lamb meat matches up nicely with an aged Rioja Reserva or Gran Reserva. The salt and fat in the meat round out the wine’s robust tannins beautifully.

Pochas con codornices a la Riojana, or white beans with quail Riojan style, is a flavorful dish combining tender quail meat with creamy pochas beans and a pepper-laden sauce. Also popular in areas of Navarra, the recipe sees the beans first cooked with water. Then, a simple sauce is made with carrots, garlic, green pepper, piquillo pepper, tomato sauce, and cooking water reserved from the beans. Once the sauce condenses, it’s added to the beans. Quail legs and thighs are added during the final fifteen minutes of cooking. Pochas con codornices pairs best with a modern white Rioja produced in a less oxidative style. Many are barrel-fermented, lending incredible texture to the wine to match the creamy beans with fruit-forward aromas and flavors to complement the spices and delicate quail.

Beef raised in the Cameros Mountains shows up in various Riojan dishes. The beef cheek slowly braised in a Rioja red wine sauce is perhaps the most delightful. 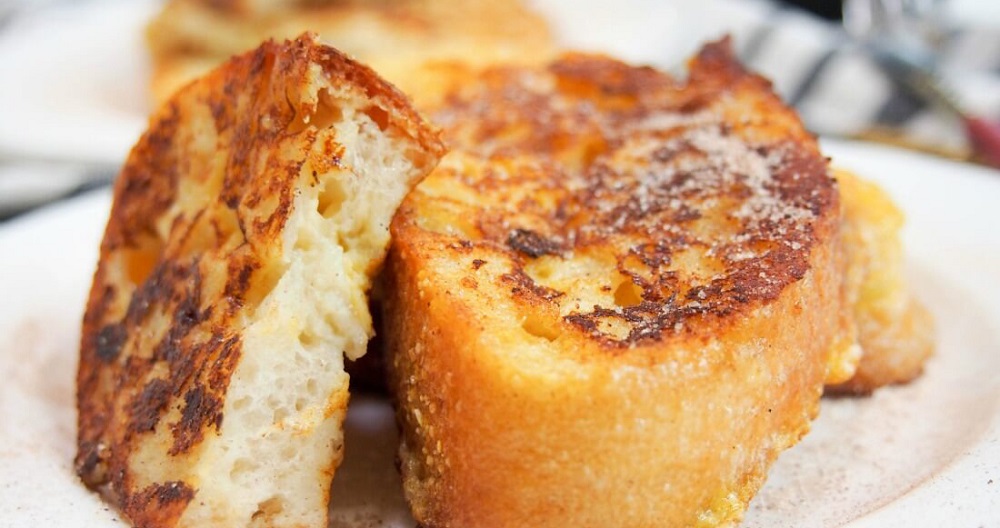 Pastries in Rioja are known as golmajería, and there are plenty to choose from. Fardelejo is a must-try pastry of Arab origins made with puff pastry and an almond filling. Rich marzipans can be found in Soto, and hormigos are another sweet treat made from flour, honey, milk, and caramel.

Peras de Rincón de Soto are a luscious variety of pear grown in the Ebro valley. They are a large pear with green skin known for their fruity, sweet flavor. In Rioja, the pears are peeled and cooked in a pan over high heat with sugar, cinnamon, clove, and local red wine for a traditional dessert.

Especially popular around March 19 for Saint Joseph’s Day and Easter, torrijas a la Riojana is a historic Riojan recipe from the 15th century. First, stale bread is soaked in milk with cinnamon and vanilla. Next, the soaked bread is dipped in a beaten egg then fried in oil. Finally, Torrijas a la Riojana is sprinkled with sugar or powdered sugar while still hot and occasionally served with ice cream or custard.