Recently, a leading university in California made a remarkable discovery. After conducting several experiments, scientists at the UC Davis in California found that grape pomace (the grape skins, pulp, and seeds left behind after fermentation) potentially had numerous health benefits. These included the ability to boost the body’s immune system and intestinal health. ‘Early results are encouraging that marc could be a valuable source for oligosaccharides and other compounds that support health and nutrition,’ scientist Daniela Barile, a professor of food science, told Wine Spectator at the time.

You can explore Burgundy Wine Region with Cellar Tours on a private Luxury Food and Wine Vacation, dine in the best local restaurants, and enjoy VIP tastings in the top bodegas.

Yet there is another widespread – and long-established – use for viticultural leftovers. It may lack the health benefits uncovered by Dr. Daniela Barile, but it has given pleasure to millions (and aided digestion) for centuries. Grape pomace, or marc, is responsible for making a very popular type of spirit, called pomace brandy. It is a wonderful way to utilize a common byproduct of wine production, ensuring minimum wastage and giving growers an additional income stream. In essence, the grape residue is distilled, either from pressed red grapes after the fermentation or from white grapes pressed before fermentation begins. In the latter case, the pomace is fermented before distillation occurs. The process is relatively straightforward – the vast majority of pomace brandy is bottled and drunk at a young age. It is also rarely aged or colored. Some of the most famous regional examples include Grappa from Italy, Orujo from Spain, Chacha from Georgia, and Tsipouro from Greece. 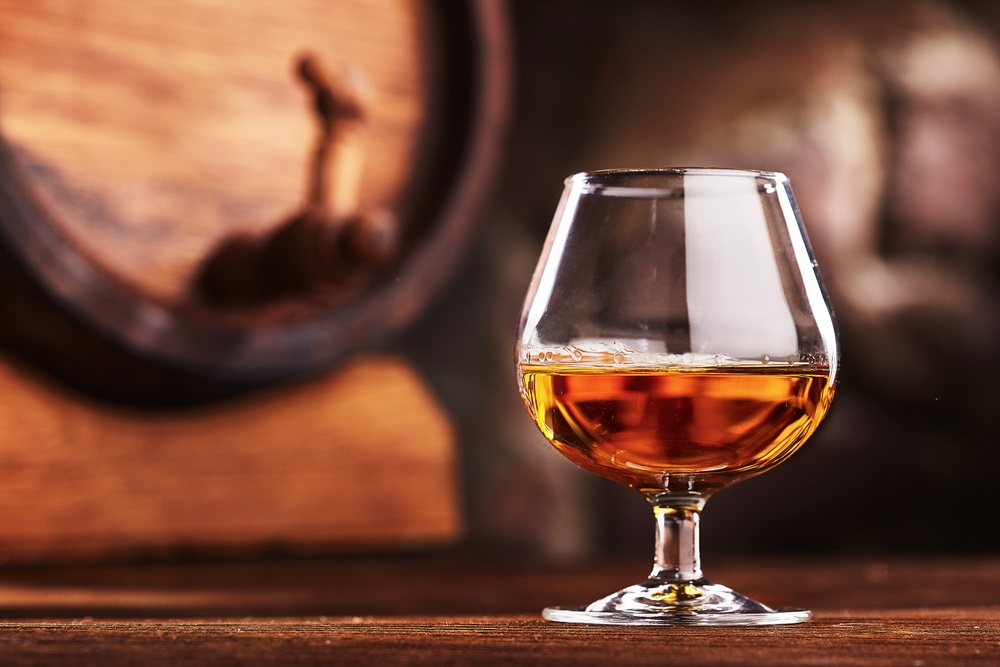 Although the vast majority of spirits made from grape pomace conform to this paradigm, there is a variety of brandy considered innately superior. For example, Marc de Bourgogne is regarded as the ‘Grand Cru’ of pomace brandy, not least because it involves world-class grapes and superior terroir. Produced throughout the Burgundy region of central-eastern France, it has been awarded its appellation (introduced in 1942) and is made to the highest quality standards. Domaine Guillot-Broux, for example, carefully ages their spirits for at least a decade before they are sold.

Nevertheless, like all spirits, Marc de Bourgogne divides opinion. The finest bottles are among the most expensive pomace brandies made in the world, sometimes aged for over 20 years before release. One of the key factors that separate Marc de Bourgogne from its rivals is the additional years of age that heightened complexity, structure, and finesse. Yet some argue that Marc de Bourgogne, however well made, cannot match the elegance and refinement of grape spirits like Cognac and Armagnac.

In the end, though, it all depends on what you desire from your digestif. Cognac and Armagnac indeed outclass Marc de Bourgogne in terms of texture and mouthfeel; even top pomace brandies cannot rival the depth and class of Hennessy Paradis and Hine Antique. But others are drawn to the raw energy, potency, and boldness of pomace brandies. On the other hand, they regard Cognac as a little too ‘high brow’ (and expensive) for their tastes; personal preference is always the final judge.

The history of brandy

It is impossible to say, with complete accuracy, when growers in the Burgundy region started to produce spirits with their waste products. However, it may have become part of the local repertoire in the 1600s, as a letter sent to the Duke of Burgundy in the late 17th century references a ‘burnt drink.’

One thing is for sure: historians are confident that distillation has been occurring in Europe for over 17 centuries. Moreover, there is evidence that Mediterranean traders introduced the technology from Asia in 300 AD – the earliest stills were found in Taxila in Pakistan and Cyprus. Indeed, many believe that distillation was pioneered by the Islamic world, developed by Arab alchemists who sought high-strength ethanol for medicinal purposes.

But when was distillation used to make brandy? Many would attribute its origins to the European shippers of the 1600s. The Dutch had a vital stake in a lucrative alcohol trade in the 17th century, shipping wine from southern regions to the ports and economies of northern Europe. Yet it was a costly enterprise, not least due to the high levels of import taxation, based on the volume shipped. However, the traders found a practical solution, whereby distillation evaporated the wine’s water and, therefore, decreased its overall volume. Using primitive stills, the merchants created ‘brandewijn’ or burnt wine, and this was then sealed in wooden casks and transported to its final destination. The merchants originally planned to reintroduce water to the burnt wine after it had cleared customs, but that proved impossible following the dramatic transformation. After many months in barrels, the spirit had darkened in color, becoming rich and wearing its higher alcohol on its sleeve. It was no longer wine. It was brandy.

Over the centuries, every European nation adopted the art of distillation, producing brandies from grapes, fruit like apples (Calvados is a classic example), and pomace. Today, the most iconic French pomace spirit is undoubtedly Marc de Bourgogne, although this style of brandy is not limited to Burgundy. Many French regions are known for their pomace brandies, including Champagne and Alsace. Whether they can rival the power and depth of Marc de Bourgogne is very much a matter of opinion. 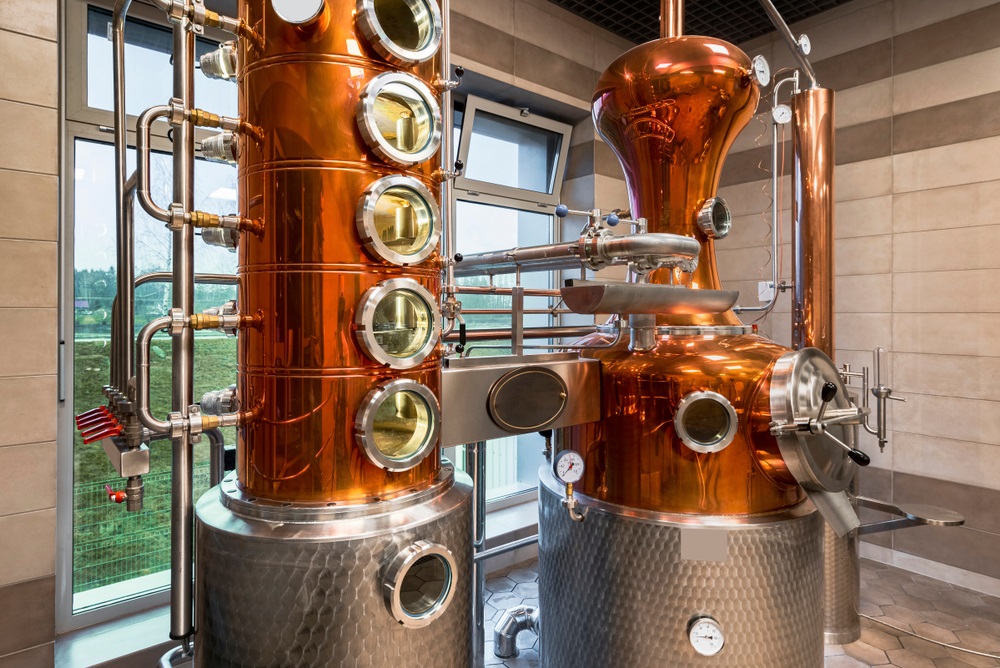 It is remarkable how growers turn a discarded pile of solid grape matter into a powerful and complex spirit. Regulated by an AOC (appellation contrôlée) created in 1942, every bottle of Marc de Bourgogne is produced according to the highest quality standards.

As ever, it all starts with the raw materials. The merchant house Joseph Drouhin, for example, uses grapes sourced from their top vineyards, including Clos des Mouches, a leading climat (vineyard site) in the appellation of Beaune. After the wines have been fermented, the pomace of pulp, skins, and pips are sent to be distilled in midwinter. By law, they are double distilled in copper pot stills heated over open flames.

Distillation is a fascinating process to observe. It involves separating water from alcohol via the use of heat. For Marc de Bourgogne, this means heating the liquid in the pomace in large copper kettles known as pot stills. Alcohol evaporates at lower temperatures than water, and once it becomes vapor, it will travel up the copper still. The vapor is then returned to its liquid state. A second distillation occurs, with the most volatile alcohols evaporated first – those are rejected as they may be too aggressive. Eventually, a white spirit with a desirable level of alcohol will emerge; a transparent, pure liquid with an unmistakably potent aroma that sets your nostril hairs on fire. The spirit will have an average alcohol by volume (ABV) of about 43%. It is then aged for several years (sometimes over 20) in oak barrels to mellow the alcoholic impact and smooth out the raw edges. It is then bottled and sold.

The final product is as divisive as any alcoholic beverage made today. There are people who abhor pomace brandies, finding them coarse and unwieldy. However, a good example of Marc de Bourgogne is as far removed from that stereotype as can be. Of course, certain pomace brandies (particularly young ones) are close relatives of home-distilled ‘moonshine,’ but our experience suggests that the Burgundians have an unrivaled knack for making refined spirits. A top example, such as the Marc de Bourgogne marketed by Joseph Drouhin, has an enticing bouquet of vanilla, cinnamon, caramel, and cigar box. The color is dark amber, while the palate is finely balanced, with flavors of dried figs, Chinese five-spice, and red berries. A long oaky, and spicy finish rounds off the proceedings in style. Most of all, you’ll be amazed at how smooth and silky the texture of a Marc de Bourgogne can be. It outclasses all other pomace brandies. It stands at the top of the tree.

For many aficionados, Marc de Bourgogne does not require a supporting act. After the meal, it is commonly enjoyed as a ‘digestif’ – a drink designed to aid digestion and warm the body on a cold winter’s night. Others prefer to add the brandy to coffee, taken as a morning pick me up. It is also regularly mixed with crème de cassis.

Nevertheless, Marc de Bourgogne is a more versatile partner to local gastronomy than may first appear. It works very well with Burgundy’s signature cheeses – especially Epoisses. The rind of this venerable soft and pungent cheese is washed in Marc de Bourgogne, so the marriage makes sense. Although gastronomes often favor aged Cote d’Or reds with Epoisses, we find that the cheese slaughters delicate old Pinot Noir. Yet Epoisses with Marc de Bourgogne is possibly the best spirit-cheese combination of them all. The brandy brings out the creaminess of the cheese, while the Epoisses smooths over the sharp taste of (some) Marc de Bourgogne and leaves spice and fruit on the palate. Local chefs also use the spirit in certain desserts or to flambé their meat in dishes like coq au vin.