In the rolling hills between Florence and Siena, there is a grape variety with ancient origins. It has been part of this timeless landscape for centuries, providing color, acidity, and verve to the wines of Chianti. It is an Italian red wine grape with beautiful aromatics and a very distinct flavor profile that transmits the characteristics of its terroir with razor-sharp precision. In addition, it boasts a very attractive texture and mouthfeel. 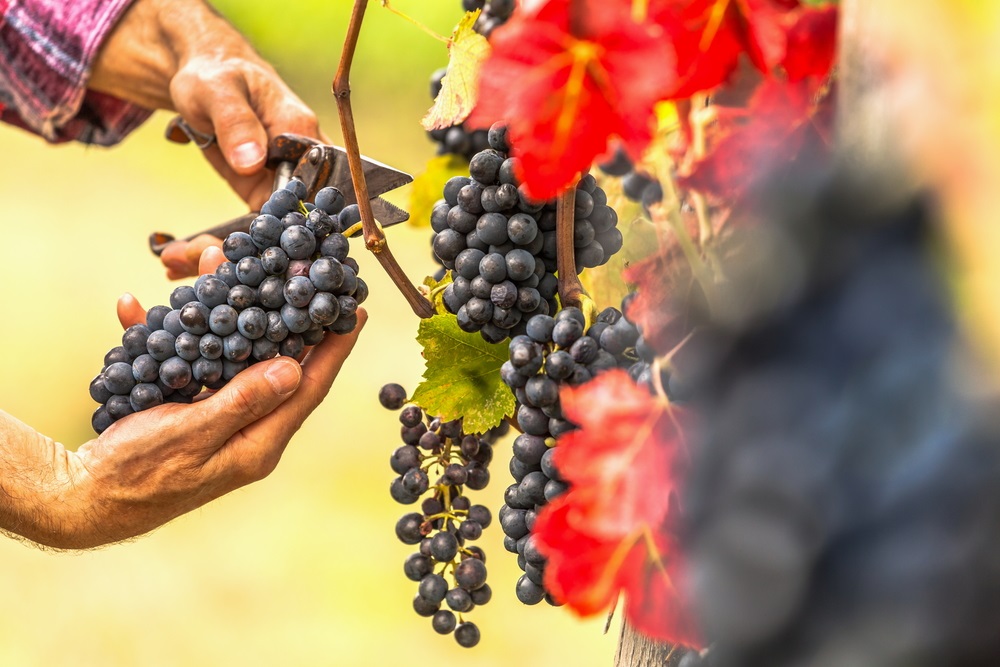 Yet we’re not talking about Sangiovese, the current king of Chianti Classico wines; we’re discussing Canaiolo. This dark-skinned grape variety has been blended with Sangiovese for many decades, yet Canaiolo is scarcely recognized outside of Italy. Over 90 percent of the 1,050 hectares planted are situated in Tuscany, although Canaiolo was once prolific in Lazio (the region surrounding Rome), and Marche. In the early 19th century, Canaiolo was the main constituent of all Chianti blends, while Sangiovese was relegated to the supporting act. Canaiolo’s journey from king to courtier is fascinating, involving an interplay of politics, viticulture, and fashion.

You can explore Tuscany Wine Region with Cellar Tours on a private Luxury Food and Wine Vacation, dine in the best local restaurants, and enjoy VIP tastings in the top wineries.

For centuries, Canaiolo was a significant part of the economic and cultural life of Tuscany. Agronomists and historians believe that Canaiolo is indigenous to central Italy, cultivated by the ancient Etruscans and the Romans after them. Indeed, Canaiolo was once ubiquitous in Tuscany as the villas, olive groves, and cypress trees. By the 18th century, Canaiolo is believed to have dominated the wines of Chianti, a position it retained for many years.

But there is one key reason for Canaiolo’s immense popularity during this era. To understand why growers favored the grape, you have to take a journey back into 19th-century winemaking. The way wine was produced in Tuscany had changed very little since the Middle Ages; hand-harvested grapes were loaded into a ‘grinder’ that tore off most of the stems before transferal to a large wooden vessel made of chestnut or beech. If all went well, fermentation would then start. Twice a day, members of the family climbed a ladder to the open top of the vat and lowered themselves down. This weight was usually enough to break the thick raft of skins, and still-whole grapes buoyed up on the surface by releasing carbon dioxide during the fermentation.

Unfortunately, time was rarely on their side. Three weeks or so after the harvest, the weather in Tuscany usually turned very chilly. This, of course, is long before the days of temperature-controlled fermentation and stainless steel; the yeast responsible for completing the process would often stop working, as it cannot function at lower temperatures. Thus, the winegrower was faced with an unfinished job, and active yeast cells were still alive in a concoction of wine and must. It was a headache, to put it mildly.

However, Chianti found a solution. It’s called ‘governo,’ a technique whereby a percentage of air-dried and concentrated grapes are added to the unfinished process to cause refermentation. As a result, the yeast cells are reactivated by the intensely sweet must, even during the chilly depths of late autumn. Canaiolo was the ideal candidate for this task, as it has a remarkable ability to withstand prolonged desiccation without rotting.

Tuscany’s winemaking culture changed dramatically in the latter half of the 20th century. Unfortunately, the devastation caused by the phylloxera louse at the end of the 19th century did Canaiolo no favors. The varietal did not adapt well to the only solution available to winegrowers, which was to graft European vines onto American rootstock.

A hundred years later, Canaiolo’s future was looking very uncertain indeed. So when both Chianti and the Chianti Classico regions were granted DOCG status in 1984, the formula for making this venerable wine style was modified. The principal change to the ‘recipe’ laid down by Barone Bettino Ricasoli in the middle of the 1800s (he greatly advocated using Canaiolo) was the right to add international varieties like Merlot and Cabernet Sauvignon into the blend. At this time, the addition of 5-10% Canaiolo remained obligatory. It was used to soften the occasionally astringent tannins of Sangiovese, inserting a welcome dash of color and ripe tannin. But the pendulum was swinging in the direction of French varietals in the 1990s.

In the past 15 years, there has been a dual movement to champion 100% Sangiovese wines and blends that take their inspiration from Bordeaux. In 1996, the Chianti Classico authorities allowed the production of ‘unadulterated’ Sangiovese wines, a practice hitherto forbidden. And also, the rules regarding indigenous varieties changed: the addition of Canaiolo became optional, while the use of other recommended grape varieties like Cabernet Sauvignon was increased to 20%. As a result, the local community sidelined their traditions for the deeper color, and more globalized appeal of Sangiovese blended with Merlot and Cabernet.

Of course, the incorporation of Canaiolo into Chianti Classico remains a possibility if the winemaker so desires. But it would be disingenuous to claim that this local curiosity is massively in vogue. In the case of Brunello di Montalcino, Canaiolo has never been part of the winemaking culture in the appellation.

Despite its unedifying fall from grace, Canaiolo does have a small – and expanding – fan club in Italy today. Nevertheless, the variety is far from easy to grow. Quite apart from its dislike of American rootstock, Canaiolo is prone to giving inflated yields unless its natural vigor is curtailed throughout the growing season. But on the plus side, the thin-skinned Canaiolo is relatively easy to manage in some ways due to its strong resistance to grapevine diseases. In addition, the better and newer clonal selection is helping to solve the rootstock problem, encouraging a Canaiolo comeback!

Young Canaiolo wines are delicious and very ‘Merlot-like’ due to the soft tannins, fresh acidity, and flavors of strawberry, plum, and fruitcake. Older wines tend to have distinctive aromas of leather, with a more savory palate and notes of tobacco, almonds, and fennel. From that perspective, it is a shame that single-varietal Canaiolo wines remain pretty rare. 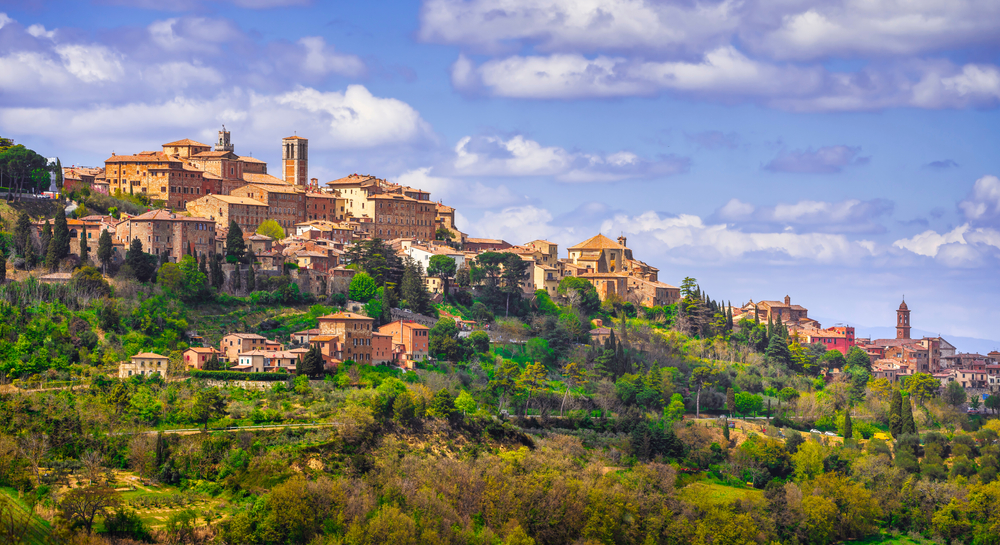 The medieval village of Montepulciano, Tuscany

The grape has long been an essential component of the wines of Vino Nobile di Montepulciano. The zone is located in the southern Tuscan province of Siena, awarded DOCG status in 1980. Although it lacks the fame of Chianti Classico, the region is nonetheless beautiful, a close cousin to the landscape of Montalcino. Vineyards flank the hill town of Montepulciano in all directions – there are over 1,800 hectares under vine, sandwiched between two rivers: the Ocria and the Chiana. Sangiovese is the most common grape variety, known locally as Prugnolo Gentile. Yet unlike Brunello di Montalcino, the local Consorzio does permit – and encourage – the inclusion of Canaiolo into the blends.

According to the DOCG rules, Vino Nobile di Montepulciano must contain a minimum of 70% Prugnolo Gentile. After that, the grower is free to tinker with the formula as they see fit, adding up to 30% of international grape varieties like Merlot or prioritizing Canaiolo. In our experience, the Sangiovese/Canaiolo blends are the superior of the two. Sangiovese forms a harmonious and mutually beneficial marriage to Canaiolo, the former providing the structure and the latter providing the opulence and fruit. It just works.

Elisabetta Fagiuoli has long been an advocate of the Canaiolo grape variety. At her base in Tuscany, she produces an exquisite 100% Canaiolo rosé wine: Montenidoli. It is quite possibly the finest rosé being made in central Italy today. The rosé undergoes a very gentle maceration using organic grapes, revealing delicate flavors of strawberries, watermelon, and ripe cherry. It is a beautifully fragrant and exceptional pale wine.

In the Maremma region, Poggio Nibbiale is also achieving remarkable success with growing Canaiolo. Organic vineyards are cropped at very low yields (by the standards of Canaiolo) and made into a single-varietal cuvée that is both refined and approachable. After fermentation, the wine is matured for five months in oak barrels, adding structure and perfume. Fresh and floral, it deserves 5-star gastronomic treatment – braised lamb and polenta would be magnifico!

In the 2013 vintage, Tuscan producer Castelvecchio decided to bottle its Canaiolo wines under a separate label: ‘Numero Otto.’ This beautiful estate in the province of Pisa cultivates over 6 hectares in a bucolic paradise. Their extensive experience growing Canaiolo allowed the family to craft a very classy and fragrant wine with aromas of strawberries, white pepper, and violets. Proof indeed that in the right hands, Canaiolo is definitely not a second-rate Italian varietal. If only more growers followed their example, the world could rediscover this underrated gem. There is also a small DOC in Tuscany – Pietraviva Canaiolo Nero DOC. Only 100% Canaiolo wines are permitted under the rules, albeit they are rarely exported.

That said, change is the only constant, as the Greek philosopher Heraclitus once proclaimed. The Italian view of things is fluid at the best of times, and there is a vocal movement to increase the acreage and usage of Canaiolo. The single-varietal cuvées on the market have demonstrated their potential beyond all doubt. The question is: are enough winemakers listening?

But there are reasons to remain optimistic. The Tuscan viticultural practices of yesterday were very different from today’s; it is almost certain that the wines of tomorrow will be different again. With just enough momentum and proselytizing from the right sources, Italy can give Canaiolo a new lease of life.