Bordeaux is quite simply the most famous wine region in the world. It is astoundingly packed full of thousands of wine estates of all shapes and sizes and is home to some of the most sought after wines on planet earth- from the likes of Yquem in Sauternes to Petrus in Pomerol, Angélus in Saint-Emilion and Château Margaux in Margaux. The name “Bordeaux” evokes images of the fairy tale Châteaux of the left bank (or “rive gauche”), the picture-perfect medieval hamlet of St Emilion, and of course of the handsome city of Bordeaux itself which is considered to be a mini version of Paris.

The Gironde (navigable) estuary flows in from the Atlantic at Pointe de Grave and extends south towards the beautiful city of Bordeaux. On its left bank stretching southwards, you hit the Médoc appellation and then consecutively St Estèphe, Pauillac, St Julien, Listrac Médoc and Mouilis en Medóc further inland, and Margaux. The appellation of Haut Médoc extends along half of the peninsula.

Near the Margaux commune, the Gironde forks into 2 rivers and becomes the Garonne (heading south, flowing through Bordeaux and the appellations of Pessac Leognan, Cadillac, Graves, Cérons, Barsac, Loupiac, St Croix du Mont and Sauternes) and the Dordogne (heading west and en route flowing through the wine appellations of Côtes de Bourg, Fronsac, Pomerol, St Emilion and its “satellites” and eventually on to the Dordogne region with its varied wine regions). In between these 2 rivers, lies the aptly named and very beautiful “Entre-Deux-Mers” white wine region. Bordeaux has close to 120,00 ha. under vine!

Explore the region with Cellar Tours on a Luxury Wine Tour of Bordeaux. You will enjoy private visits to the top wineries and taste first growths in their birthplace.

Bordeaux has many “classified” châteaux, which refers to the famous 1855 classification. In 1855 Napoleon III held the “Exposition Universelle de Paris” (the world fair) and he ordered a new classification for the best wines of Bordeaux to be created, perhaps partially in order to show off to international visitors. Wines were selected by Bordeaux’s wine brokers (“called “négociants”) and were picked based on reputation, the extravagance of the Château and cost (the higher the better), and categorized from 1st growth (“premier cru”, this being the highest honor) to fifth growth. The few wines selected for first growths were Lafite, Latour, Margaux, and Haut- Brion. Apart from red wines, sweets in Sauternes and Barsac were also classified. Their system had an extra spot at the top for “Superior First Growth” (Premier Cru Supérieur) and the only wine estate to receive this honor was Château d’Yquem.

Confusingly, the entire region on the left bank from St Estèphe to Margaux, with the appellations of Haut- Médoc and Médoc included, is all considered to be the “Médoc” geographically. The grapes used here primarily are Cabernet Sauvignon (the flagship left bank grape, which is responsible for the structure, tannins, fruit, and aging potential of the wines), Cabernet Franc (which gives elegance and finesse to the blends), and smaller quantities of Merlot (bringing roundness, soft fruits, and body). Then minute quantities of Petit Verdot, Malbec, and Carménère are thrown into wine blends as a chef would use a spice- to bring out other flavors. The poor soils here make for great viticulture, and you will find a mix of gravel, pebbles, and sand in the vines. Vines propel their roots deep into the earth (as far as fifty feet down) to find water, which leads to low yielding vines that make ultra-intense, delicious wines.

Bordeaux’s oldest vineyards are to be found in Graves, a great swathe of land that includes vines planted in the southern outskirts of the city of Bordeaux.

The very mention of this venerable region conjures up some of the most powerful imagery in Bordeaux – of stately chateaux, captivating perfume and long-lived wines of incomparable finesse.

If we had to single-out one Bordeaux region to head the list, there would be no argument. World-renowned and adored by every wine lover on the planet, Pauillac needs little introduction.

St-Estephe is perhaps the most misunderstood of the Medoc’s great wine appellations. For a start, there are only five classified growths, and none of them are a First Growth.

No other region in Bordeaux has so high a proportion of classed-growths as St-Julien. Yet it is a small commune, with the smallest production of the famous four appellations of the Medoc

South of the city of Bordeaux, lies a region unlike any other in the world. Here, under the right conditions and in the best years, celebrated chateaux produce the world’s longest-lived sweet wines.

On the right bank, Pomerol and St Emilion are the most famous superstars, while there are some delightful surprises in Fronsac and Côtes de Castillon. The grapes used here are the same as the left bank but generally with Merlot as the dominant grape and Cabernet Sauvignon as the secondary blender if at all. This has to do with the terroir here- the relationship between soils, grapes, climate and vineyards exposure. The right bank has more clay and limestone soils and as a rule, has more gentle hills than the left bank which is quite flat. While the left bank is home to countless grand Chateaux (and rather unattractive scenery in between), the right bank is more about gorgeous scenery and more humble wineries. This is where you will encounter many of the famed “Garagistes”, “Garage wines”, such as Le Pin in Pomerol.

The wine classification system in St Emilion is different than Médoc too and extremely convoluted. The first official classification was made in 1955 and subsequently updated in ’69, ’86, ’96 and then finally in 2006. The results of 2006, with its unpopular demotions (blamed on vested interests of the brokers), were later revoked. So just to confuse you, the results of the ’96 classification were ordered by a court to be put back in place for vintages after 2006. But a later court ruling in 2009 stated that the wineries that had been promoted could keep their 2006 status. Fun, fun! At any rate, the classification system of St Emilion is comprised of 3 categories: the best being Premiers grand crus classés A (of which there are only ever 2 estates- Cheval Blanc and Ausone), then Premiers grand crus classés B (11 estates in the 2006 classification), finally Grands crus classés. In Pomerol, there is no official classification system and some of its best wines fetch higher prices than the 1st growth of Bordeaux proving that great wines will be appreciated regardless of their arbitrary classification.

Pomerol is something of an anomaly in the Bordeaux hierarchy of venerable wine regions. While the Medoc and St-Emilion place much value and emphasis on their classification system, Pomerol has always got by without one.

The ancient and beautiful region of St-Emilion has beguiled the palates of wine lovers for centuries. 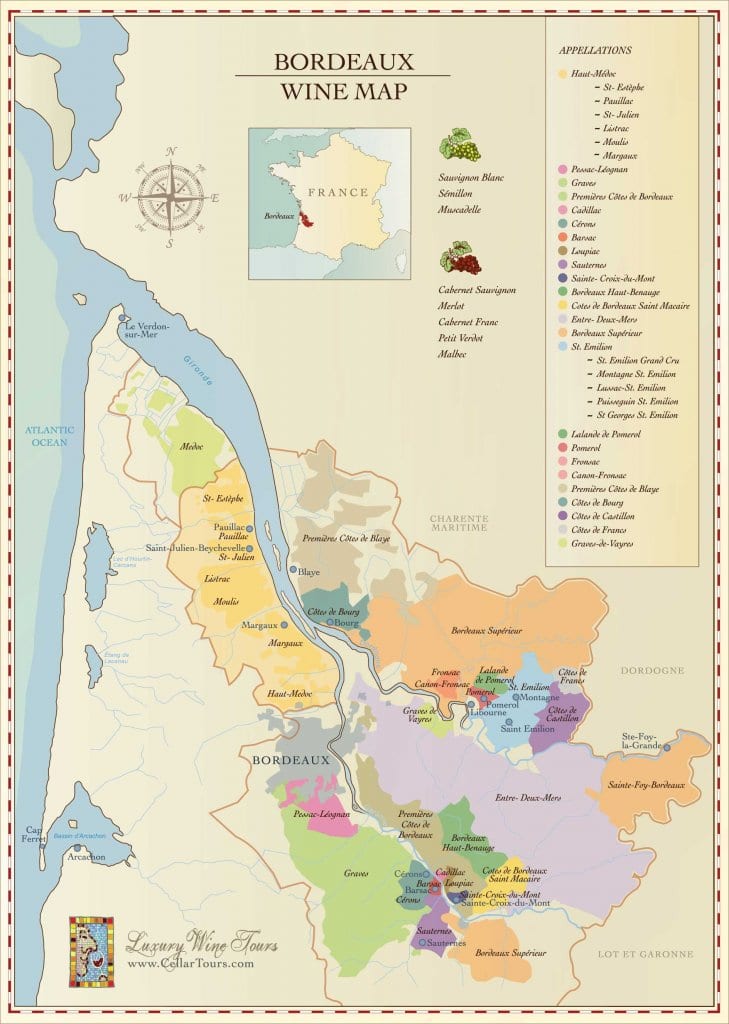