The great wines and crus classés chateaux of Bordeaux have made this French wine region famous worldwide. Between Médoc, Pauillac, Margaux, Pomerol, Saint-Émilion, and Sauternes, a treasure trove of fine wines are produced surrounding the Gironde Estuary, Dordogne, and Garonne rivers. The Roman Empire, Basque traders, British colonizers, and more recently, the Asian elite have all traversed this estuary over the last few thousand years. Historically, Bordeaux was a major port city and center for trade along the Atlantic. Today, Bordeaux’s Port of the Moon and roughly 1,800 hectares of the region are designated a UNESCO World Heritage site. In addition, Bordeaux is just a 3-hour drive from the Basque country, 1 hour from Dordogne, and 2 hours from Toulouse. Consequently, Bordeaux cuisine is primarily shaped by these geographic and historical influences. The Marché des Capucins, which held its inaugural market in 1749, is a testament to the diverse ingredients and flavors of the region.

You can explore this region of France with Cellar Tours on a private Luxury Food  & Wine Vacation, dine in the best local restaurants, and enjoy VIP tastings at top Chateaux. 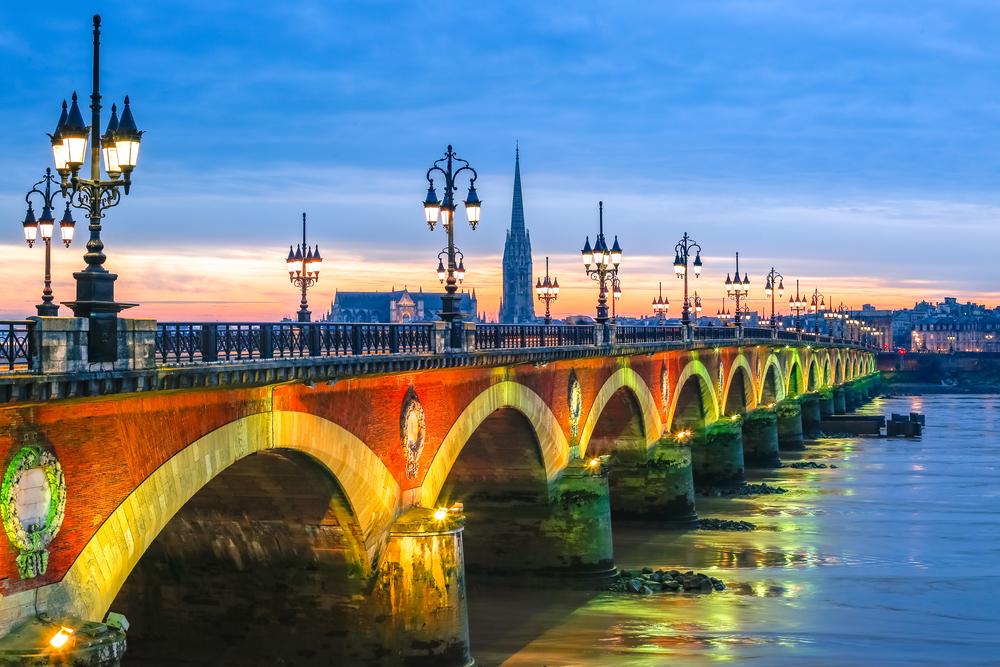 What to Expect from Bordelaise Cuisine

Bordeaux cuisine is comprised of ingredients from both land and sea. Situated on the Atlantic coast with the Gironde Estuary, Dordogne, and Garonne rivers running through the region, oysters, mussels, and a variety of seafood are widely enjoyed.

If you’re wondering what to eat in Bordeaux, start with oysters. Thanks to tidal influences, there are around 315 oyster farms in the Gironde department. Here they have a unique ecosystem from the combination of fresh and marine waters contributing to their firm texture and nutty taste. Oysters from the Arcachon basin, Médoc, and Cap Ferret are especially popular. They were even adored by the Romans who arrived in Bordeaux in 56 A.D., as Pliny the Elder mentions Médoc oysters in his texts from the 4th century.

Aquitaine caviar is another luxurious aquatic specialty of Bordeaux cuisine. The local delicacy was discovered on the Gironde Estuary thanks to a Romanov who escaped from Russia in the 1920s. He showed the locals the sturgeon they’d been fishing for centuries contained this prized gourmet specialty.

Join CellarTours on a luxurious private Wine Tour of Bordeaux’s wine regions. Visit beautiful wine estates with charming, friendly hosts and learn all about the complex and fascinating history of Bordeaux and its wines. Intersperse the wine-sipping with promenades in the vineyards, tours of Bordeaux’s golden triangle, and St Emilion with local art historians, a boat ride in the striking Arcachon basin.

Historically, Bordeaux always received exotic spices as a port city. With French colonies throughout the world, ships would return from destinations in the West Indies, Africa, and Americas with spices new to the region. Ingredients like saffron, peppers, and vanilla arrived in Bordeaux by way of trade. Today’s CAPC modern art museum once served as a storehouse to stock these trading supplies, as well as chocolate, coffee, capers, tobacco, and cotton.

Meat eaters also have something to look forward to in Bordeaux cuisine. Several Bordelaise dishes feature chicken, duck, lamb, and beef. Boeuf de Bazas is one of the most prized breeds in the Gironde. Look out for the rib-eye steak prepared as entrecôte à la Bordelaise.

For produce, cèpes de Bordeaux and Blaye white asparagus are not to be missed. Cèpes are rich, and meaty mushrooms usually forage when the grape harvest is complete. They thrive in the French region’s maritime climate and pine forests. At the same time, the region’s white asparagus grows in the humus-rich soils of Blaye on the right bank of Bordeaux. These black sandy soils give white asparagus a buttery, melt-in-your-mouth texture for which they’re widely adored.

While in Bordeaux, you’d be remiss not to explore wines from the many appellations of the region. Red wine dominates production. Though dry white wines made from Sauvignon Blanc and Semillon can be found in Entre-Deux-Mers, Graves, and Pessac-Léognan. Red Bordeaux is typically a blend of Cabernet Sauvignon, Merlot, Cabernet Franc, and Petit Verdot. The tradition of blended wines helps combat the region’s highly variable weather. Thus, eliminating the risk of potentially losing profits if a crop of a single grape variety is damaged.

Generally, red wines from appellations along the left bank of the Gironde Estuary will be dominated by Cabernet Sauvignon. Vineyards of the Haute-Médoc and highly reputable AOCs like Saint-Estèphe, Pauillac, Saint-Julien, and Margaux are composed mainly of gravel soils beneficial to Cabernet Sauvignon. In contrast, wines from the right bank appellations of Saint-Émilion and Pomerol are usually Merlot dominant with a high portion of Cabernet Franc.

Beyond wine, Lillet is a French aperitif produced in the heart of Bordeaux. Since 1872, Maison Lillet has made the aperitif from a blend of local wines and fruit infusions. The only wine aperitif made in Bordeaux, Lillet, is offered in three styles – Blanc, Rosé, and Rouge. 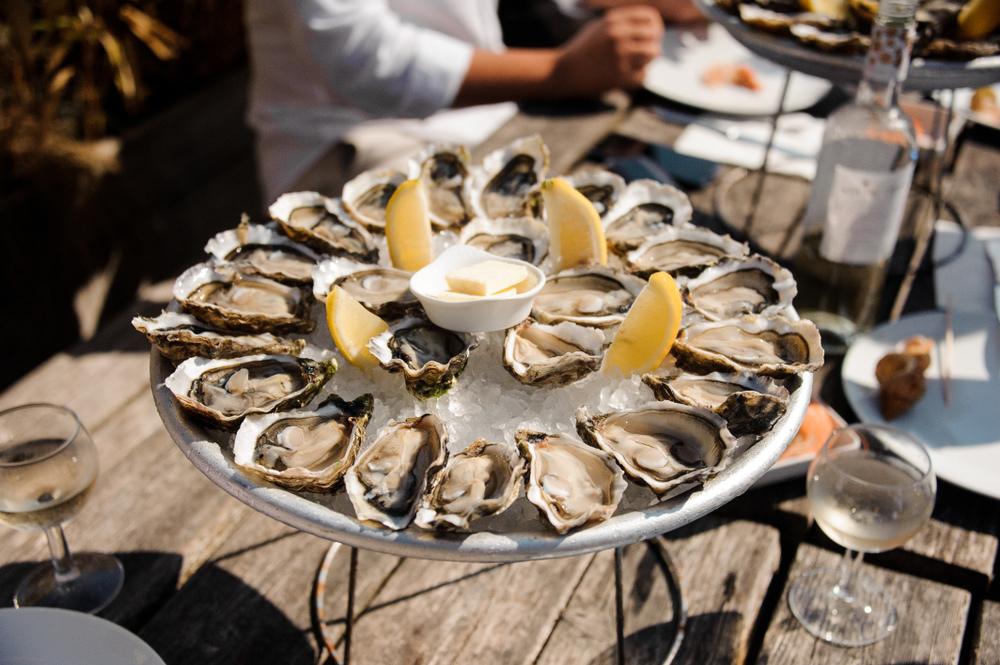 With so many aspects of Bordeaux cuisine influenced by water, oysters and mussels are popular entrées. The Arcachon Basin delivers over 10,000 tons of fresh oysters annually. Visitors of villages near Cap Ferret can pop into numerous oyster tasting cabanes near the waterside to savor this delicacy with spectacular views. A crisp glass of Champagne, Chenin Blanc, or fresh Sancerre makes for mouthwatering wine pairings for oysters.

Alternatively, when savoring seafood along the coast or shoreline of the Gironde, try éclade de moules. Prepared using a barbeque method that involves packing mussels tightly in a circular formation and placing on top of on a water-soaked board then topped with pine needles or hay, which gets set on fire to cook the mussels. This unique cooking method originated in the Charentes region, and local Charentes white wines are often enjoyed with éclade de moules.

Foie Gras is just as popular in Bordeaux cuisine as in other French regions’ culinary traditions. However, most of the decadent foie gras served here comes from nearby Périgord in the Dordogne. Many of the region’s red wines make a delicious match for foie gras. The plush mouthfeel, red fruit aromas, and plum flavors of Saint-Émilion might be the best bet. On the other hand, sweet aromatic wines of Sauternes are a classic foie gras wine pairing. The lusciously sweet wine with apricot, citrus and butterscotch aromas stands up well to the richness of foie gras.

The seasonal savory mushrooms of Bordeaux are best savored in autumn. During this time, they’re found on menus prepared en persillade. Sautéed in butter, shallots, garlic and finished with fresh parsley and salt, the mushrooms’ nutty flavor and meaty texture shine. Pair this rustic entrée with a Merlot forward Côtes de Bordeaux wine with the earthy undertones to match.

For the Main Course 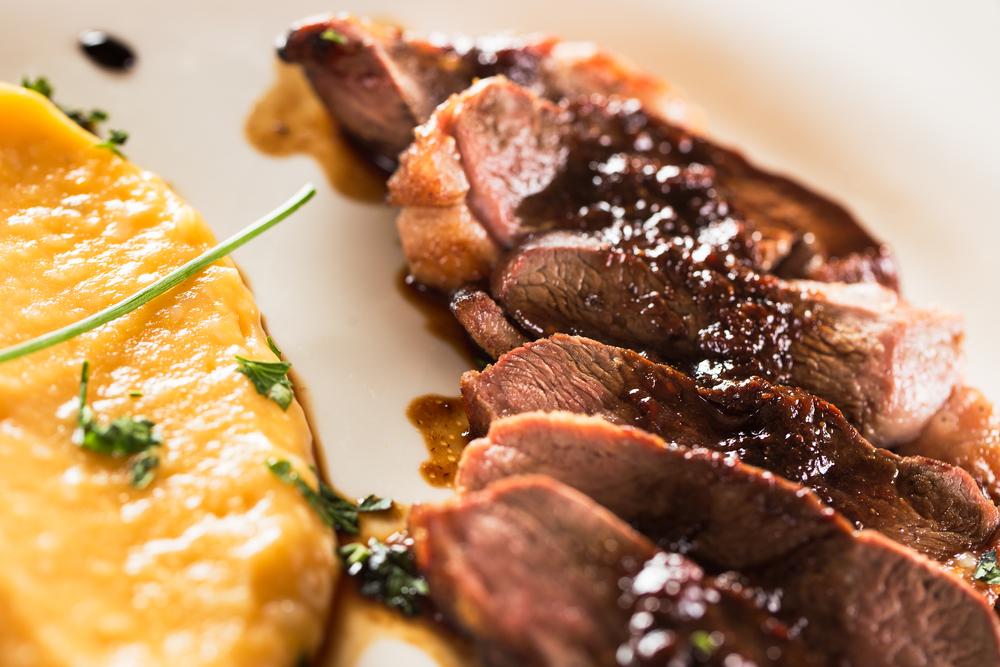 Entrecôte à la Bordelaise is a classic dish featuring a cut of meat from between the cow’s ribs known as a ribeye in English. The entrecôte is seared and then drizzled with a Bordelaise sauce. Made from butter, shallots, red Bordeaux wine, and spices, the flavorful sauce simmers and reduces until reaching a thick consistency. French fries, mashed potatoes, or sautéed mushrooms typically accompany entrecôte à la Bordelaise. Of course, there’s no better wine pairing than a bold, oak-aged red Bordeaux from the Haut-Médoc or any of its prestigious communes. Dominated by Cabernet Sauvignon, these red blends have a core of blackcurrant fruit with cedar notes from oak aging. The wine’s grippy tannins will soften beautifully with the salt and fat of the meat.

Prominent in the Gironde Estuary, lamprey is a type of fish that resembles an eel. During the Middle Ages, they were reserved only for the tables of kings and queens. Today, lamprey à la Bordelaise is enjoyed mainly by the locals. To prepare the dish, the lamprey are hung by their heads, their tails are cut off, and their draining blood is collected, as it’s an essential ingredient for this Bordelaise specialty. Next, a stew is made with the lamprey meat, blood, red wine, potatoes, leeks, onions, and shallots; plus, a shot of Cognac or Armagnac might be added for more flavor. Finally, lamprey à la Bordelaise is served with crusty bread to soak up the sauce and is best enjoyed with a glass of local red Bordeaux.

Le magret de canard grillé, or grilled duck breast, is another delicious plat principal in Bordeaux cuisine. The duck breast is seared on both sides and served medium-rare in slices and is often accompanied by potatoes, mushrooms, or other sautéed seasonal vegetables. Enjoy a glass of Pomerol with this French dish, as the richer red wine with flavors of blackberries and spices is an excellent match for decadent duck breast.

Pauillac lamb shoulder is a dish made from lambs raised in the Médoc. The land offers ideal conditions for farming sheep, and Pauillac lamb is raised primarily on its mother’s milk for up to 75 days, which results in supremely tender, leaner white meat and an unmatched taste. L’epaule d’agneau de Pauillac is often slowly roasted in the oven with olive oil and aromatics like onion, garlic, and parsley. Pair this Bordelaise dish with an aged Pauillac whose tannins will have softened into a velvety texture, perfect for the succulent roasted lamb.

With such a wide array of wines to discover, Bordeaux is bound to have noteworthy cheeses, too. Here are a few must-try cheeses from the region. 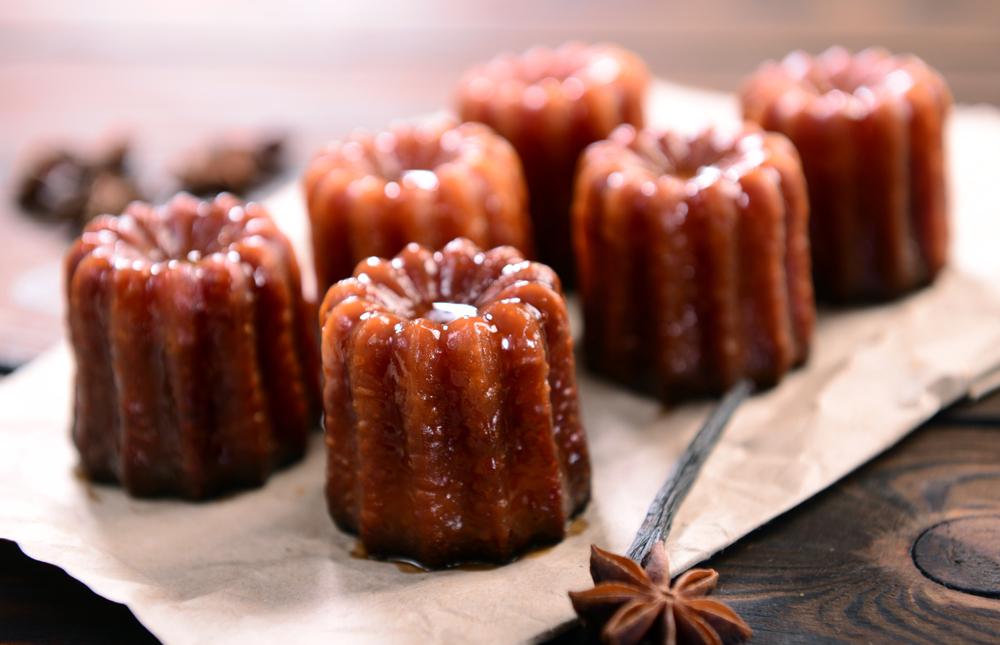 Canelé, crispy on the outside, soft and tasty on the inside

A trademark sweet treat of Bordeaux cuisine, canelés are small, indulgent cakes with a caramelized exterior and almost custard-like interior. To clarify wines in Bordeaux, producers historically often used egg whites for the fining process, leaving many extra egg yolks that needed to be utilized. Those yolks found their purpose in this delicious dessert canelés, made from egg yolks, flour, sugar and typically flavored with rum or vanilla, canelés are irresistibly delicious. It’s impossible to eat just one!

Dunes blanches are small cream puffs dusted in powdered sugar. In 2007, Pascal Lucas first created the recipe in Cap Ferret and named them after the sand-dunes of the Arcachon Basin. Visit his patisserie, Chez Pascal Dunes Blanches, to taste the authentic recipe.

Invented in 1620 by the Les Ursulines nuns who settled in Saint-Émilion, these macarons are made with just three ingredients – egg whites, confectioner’s sugar, and almond flour. Macarons de Saint-Émilion are one of the oldest sweet specialties of Bordeaux cuisine.