What is the most famous grape of Piedmont?

Piedmont and Nebbiolo. The two are as inseparable as Burgundy and Pinot Noir, a noble and longstanding marriage between grape variety and terroir. Planted across the Langhe hills to the south and east of the river Tanaro, Nebbiolo is grown to perfection by the best producers, who craftily harness the potential of the superior ‘climats’ (vineyard sites) and then jealously guard their secrets. The grape is cultivated – in relatively minuscule volumes – in parts of the US, Australia, and New Zealand. Still, only northern Italy manages to bring out those hauntingly beautiful flavors and aromas.

Yet while collectors (understandably) obsess over the rarest vintages of Barolo and Barbaresco, it is important to remember that Nebbiolo is not the mainstay of Piemontese production. The region grows several indigenous and characterful varieties across its undulating landscape, including the white grape Arneis. As a result, the local palate is far more varied, complex, and exciting than initially appears. You can enjoy the celebrated wines on a private Piedmont Wine Tour, organized exclusively for you by Cellar Tours.

Nevertheless, any discussion about Piedmont’s viticultural traditions must start with Nebbiolo. For centuries, the haunting and inimitable Nebbiolo has claimed the title of being the finest red grape of northern Italy. The best and most succinct way to summarize the grape would be: “Italy’s answer to Pinot Noir.” Temperamental, difficult to grow, and very sensitive to terroir, every nuance of aspect and soil will affect how Nebbiolo ripens. The best sites produce wines full of tannin and acids – Nebbiolo can be unattractively astringent and fierce in its youth. The color pigments in the grape skins, called anthocyanins, are relatively sparse in number, but the phenolics are occasionally overwhelming. However, long aging, both in cask and bottle, can result in the most seductive red wines on the planet. Swirl the glass, and you’ll instantly detect aromas of tar, roses, violets, orange peel, and chocolate in hotter years.

The two best red wines of Piedmont, Barolo, and Barbaresco, take their identities from villages of the same name. But other appellations also do the grape justice: Nebbiolo d’Alba, Langhe Nebbiolo, and red Roero are all winning critical praise and consumer adulation nowadays. Interestingly, most of the region’s other famous wines are named after the grapes from which they are made – Barbera, Dolcetto, Moscato – and not the area’s picturesque villages. However, if the grape is attached to a village-name suffix – Barbera d’ Asti, for example – it means that it has been grown in a delimited and superior designation. Piedmont is nothing, if not complex!

Barbera, however, is a red grape that has been historically unfairly maligned – although this is now changing. Today, Barbera is very much in vogue, producing big, deep, powerfully-scented, and charming wines. That being said, the grape requires a monumental amount of effort in the vineyard. It thrives on calcareous soils; left to its own devices, Barbera vines produce massive yields, promiscuously growing inflated bunches and oversized berries. Yet with skill – and regular pruning – Barbera makes special wine. Unfortunately, it is a variety that, when underripe, suffers from an abundance of tart acidity, although the grape was traditionally picked earlier than Nebbiolo! But in fact, Barbera needs to be planted on warm sites and benefits from being harvested in late September to bring the acidity down to manageable levels. The best growers in Barbera d’Asti and Barbera d’Alba have no peers – Barbera del Monferrato is also increasingly gaining a favorable reputation for its wine.

What are Barbera’s signature scent and flavor? Typically, young examples smell of cherry and black fruits, while oak-aged wines tend to have more structure and weight. The best vintages offer a counterpoint between plum fruit and more exotic, spicy characteristics. The variation between growers, sub-zones, appellations, and vintages is fascinating. Barbera is very much a chameleon. 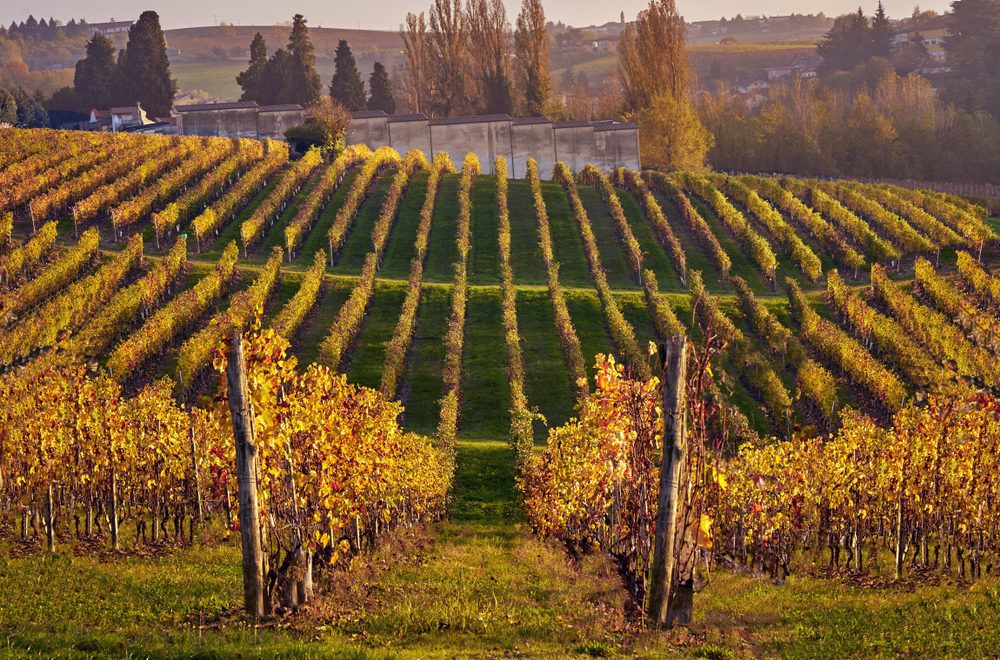 Dolcetto is Piedmont’s third most important red variety. Actually, that’s a matter of opinion – some aficionados adore its fruit-driven palate, lighter body, velvety tannins, and relatively low acidity. Nevertheless, Dolcetto is undeniably the antithesis of Nebbiolo; collectors do not swoon over Dolcetto wines. But that is not to deride the grape, as the variety will ripen in the coolest, highest sites: the naturally low acidity of Dolcetto can be an advantage, in addition to being a viticultural hazard.

The best wines pay homage to that often-quoted winemaking compliment – “balanced.” You can expect black fruits, licorice, and plum on the nose and palate. Most of all, Dolcetto should be fleshy and appealing soft in the mouth. It loves local dishes and is a mainstay of all good Piemontese kitchens. Often slightly bitter on the finish, Dolcetto benefits from a healthy amount of anthocyanins in the grape skins, which means a shorter maceration is advisable. More powerful, structured examples are produced, but these are often too tannic and unwieldy. Dolcetto reaches its apogee (in our opinion), in the villages of Alba, Diano d’Alba and Dogliani.

Meanwhile, Piedmont cultivates several interesting and unique white varieties, although consumer recognition has yet to catch up with the reds. The possible exception to that rule is Cortese. Responsible for making Gavi a globally recognized wine style, Cortese has found a willing audience abroad. Lightly skinned, delicate and prolific across northern Italy, Cortese is perhaps Italy’s answer to Spain’s Albarino. If yields are kept in check, and the vines are planted on superior sites, then the eager drinker should get a mouthful of green fruit and citrus – refreshing, zesty, and very food-friendly. Seafood and Cortese are an obvious and reliable pairing.

The grape thrives in the DOCG appellation of Cortese di Gavi and the DOC wine-producing areas of Colli Tortonesi and Cortese dell’Alto Monferrato. Located to the west of Gavi, the wines dell’Alto are arguably slightly inferior to that designation, lacking perhaps Gavi’s fruit expression and ‘punch.’ Some oaked examples are occasionally made, but Cortese finds its purest expression when the clean and vibrant fruit speaks for itself.

Read more about the Cortese Grape.

However, Arneis would have difficulty winning recognition awards outside of Piedmont. Some growers would argue that it should be ripped up and abandoned altogether: Arneis is not a gift to viticulturists. Traditionally used as a blending partner to second-rate Nebbiolo, the grape can suffer from an excess of sugar and a lack of acidity in the fermenter. Yet if Arneis is planted on the appropriate terroir – sandy/chalky soils suit it best – then a fruity, structured white can be coaxed out of this mercurial variety.

Demand for Arneis has risen recently as growers prove that it can be an interesting alternative to Gavi. Its character is not unlike Pinot Blanc: soft, light and aromatic, with stone-fruit, grapefruit, and citrus notes on the palate. It is grown most successively in Roero, on higher-altitude sites northwest of Alba on the sandy soils of the Tanaro’s left bank.

Read more about the Arneis Grape.

But Piedmont’s real crowd-pleaser is arguably Moscato. This unique sparkling wine style, which has been massively and heavily popularized across the US, owes its origins to an obscure corner of northwest Italy. It remains the region’s signature white grape, loved and despised in equal measure – often for the same reasons. Acolytes will rave about the low alcohol and the ‘straightforward’ fruity character of the wine; naysayers deride the style as “fizzy pop.” The grape is responsible for sparkling Asti and the superior Moscato d’Asti. The grape ripens to about 7-8% potential alcohol, which becomes about 5% in the bottle. Vineyards surrounding the village of Asti always produced the best wines. Cellar Tours adores the style – wine does not always have to be ‘serious’ and expensive to give pleasure. Served after a heavy banquet, Moscato’s lightness of touch can delight saturated dinner guests.

Of course, collectors and sybarites will always prioritize the best wines of Barolo and Barbaresco over Piedmont’s less exalted grape varieties. Yet there is real merit and excitement in occasionally veering from the familiar path. The region is full of esoteric gems: Brachetto d’Acqui, light red Verduno from Pelaverga grapes, and the sweet Malvasia – Casorzo di’ Asti. No one could ever accuse Piedmont of lacking variety, even if the world’s connoisseurs have a powerful bias toward Nebbiolo.