Which wines and cheese pair best together?

No foodie topic is more open to debate, disagreement, and subjectivity than “correct” cheese and wine pairing. Local cuisine, different cultures, and personal preferences make what seem perfectly acceptable wine and food combinations appear utterly awful to others. Our own feelings on this subject are almost schizophrenic; personal experience tells us that it is, above all, a complex and very subjective affair. Not to mention that everyone’s palate is unique, yet it is also a gastronomic endeavor littered with well-worn myths. The notion that fine red wine and cheese are a marriage made in heaven is not born out by experience. Or common sense. 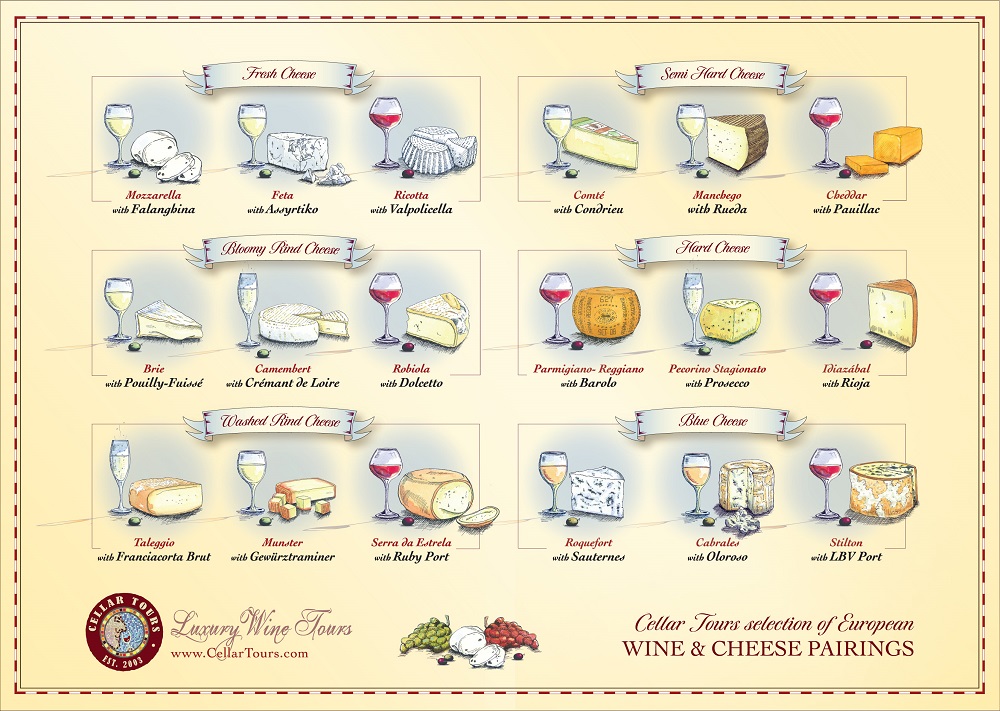 Indeed, fine red wines such as Pauillac and Chambertin are typically slaughtered by strong, pungent cheeses, which overwhelm rather than complement the wines paired alongside them. It is far preferable to serve sharp or sweet white wines in this case, particularly whites with a racy acidity. However, it is ultimately, of course, a question of personal taste.

That being said, some guiding principles can really enhance your overall cheese and wine experience. For example, hard cheeses tend to pair better with tannic wines, while the creamier the cheese, the more acidity is needed in the wine. The main exception constitutes another useful tip for cheese and wine pairing: wines and cheeses of a region, such as Piedmont, Rioja, Champagne, etc., usually work well together. Cheese has traditionally been classified by its texture and the nature of its rind, so the appearance of cheese provides a useful guide to the type of wine to match it.

We have compiled a list of the most common groups of cheeses, and some wines that tend to work well with them, such as Cheddar, Mozzarella, Parmigiano, Epoisses, and Manchego, among many others. Above all else, we encourage you to experiment and have fun! This is a useful guide (we hope), but it isn’t the last word.

Fresh cheeses aren’t going to win any awards for color diversity; most fresh cheeses are pale-colored, owing to the young age of the milk used. They are among the most popular in the world due to their soft texture and creamy flavors. Some of the most famous types of fresh cheese include Mozzarella, Mascarpone, Ricotta, Feta, Halloumi, and the same-named Queso Fresco. They are lovely, simple additions to salads and bread dishes from sun-kissed locations like Provence, Greece, and Tuscany. We have found that fresh cheeses suit light and crisp white wines. Oaked wines tend to overwhelm the straightforward, delightful flavors of fresh cheese. So try a young Graves Blanc, a lemony Assyrtiko, a zippy Albariño, or a fresh and light red like Beaujolais or Valpolicella. Rosé from Provence is another surefire hit. The secret is to ensure that nothing clashes or dominates, preserving the flavor and freshness of both the cheese and the wine.

Brie (called the “Queen of cheeses“) and Camembert are probably the most internationally famous bloomy rind cheeses. Most of the most well-known soft-ripened (a cheese that ripens from the outside in, instead of vice versa) have a bloomy rind. The term “Bloomy” refers to the edible fuzz that “blooms” or flowers on the cheese rind when “Penicillium camemberti” or “Penicillium candidum” has been employed in the production. Cheesemakers spray this solution containing edible mold spores, which tend to form a rind due to the room’s humidity where the cheese is being aged. These cheeses have a white crust (which is perfectly edible), and they have a creamy interior with up to 70% moisture content. Delicious and oozy! They can be made with different kinds of milk, including cow, goat, and sheep. Some more great examples of bloomy rind cheeses include Bougon (goat’s milk ‘Camembert’), Capraricca (from Veneto), Neufchâtel (from Normandy), and Robiola (from Piedmont). These creamy cheeses pair beautifully with a surprisingly wide range of wine styles, from unoaked Chardonnay like young Chablis to sparkling Franciacorta (brut) and light red varietals like Pinot Noir. A more daring, unusual pairing is with Amontillado Sherry, sublime!

Washed-rind cheeses are extraordinarily pungent and robust in flavor. Cheese lovers fondly refer to these as “stinky Cheese,” and they are indeed earthy and even called “barnyardy.” Cheesemakers coat the cheese in a saltwater brine or alcohol solution, which creates a damp environment where edible molds can grow and flourish into a sticky, orange-red rind (which, while edible, may be salty). This technique dates back to monastic times in medieval Europe. Similar to Bloomy Rind cheese, Washed rind cheese also has a glorious, oozy center. Famous examples of washed-rind cheeses include the renowned Pont l’Eveque, Burgundian Époisses, Taleggio from Northern Italy, Puigpedrós from Catalunya, Reblochon and Tomme de Savoie from the French Alps, Munster from Alsace, and Portuguese Serra da Estrela (called the “king of Portuguese cheese”). Washed-rind pungent cheeses need to be paired with wine with extreme caution. Burgundians often suggest Epoisses with mature, red Burgundy. However, we prefer younger, fruit-driven wines from Beaujolais. Gamay creates a perfect marriage between fruit and acidity when paired with pungent soft cheeses. Powerful whites also acquit themselves nicely – try Alsatian Gewurztraminer with Munster, and a Garnacha Blanca from Montsant or Priorat with Puigpedrós. If you wanted to try broadening your wine horizons, consider pairing Cava or dry oloroso sherry with these varieties of cheese. The acidity that is inherent with Cava cuts across the richness very nicely, where oloroso sherry’s oxidative, gamey notes are the perfect foil to the ‘smelly’ excesses of Pont l’Eveque. Trust us, it works.

The principal difference between semi-soft cheese and semi-hard cheese is simply the moisture content (extracted by pressing the curds to remove it from the whey). Semi-hard cheese averages 45-50%. This is also a stage of cheese aging, so a cheese can start as semi-soft and become semi-hard as the moisture eventually evaporates. The best-known semi-hard cheese would be Cheddar, Gouda, French Comté, Dutch Edam, Swiss Gruyère, Pecorino (semi-hard sheep’s cheese from Sardegna and Lazio), Spanish Manchego, and Danish Havarti. When sold, many kinds of cheese in this category are covered in wax rinds, such as Gouda and Edam. Lesser-known semi-hard cheese examples include the marvelous “Murcia al Vino” from southeast Spain and São Jorge from the Azores Island. Semi-hard cheeses are often buttery and “nutty” and pair beautifully with rich whites like Condrieu, barrel-fermented Chardonnay, and Chenin Blanc. Young Rioja, Sangiovese (like Chianti), and Languedoc reds work as well. And Cheddar loves Cabernet Sauvignon, so a Cab Sauv-dominated left bank Bordeaux blend is pretty much perfect.

This is a much-loved category of aged cheeses, encompassing many regions, nations, and production styles. These cheeses are generally characterized by their savoriness and tend to be gratable and crumbly. Some of the most famous examples would be Parmigiano- Reggiano, Grana Padano, aged Cheddar, Idiazábal from Spain’s Basque Country, and Canestrato (an aged Pecorino). As the category “hard cheese” relates to moisture levels (the driest of all categories, with an average of 30-40% moisture), most of the semi-hard cheeses mentioned previously also have “hard,” more mature versions (like Manchego, Gruyère, etc.). Our favorite pairing would be Parmigiano and Barolo – it sounds like a waste of a good Barolo. Still, the racy acidity and grippy tannin inherent to younger Barolo adores the saltiness and grainy texture of a mature Parmigiano or Pecorino cheese. Prosecco, however, would be the classic pairing with Parmigiano. Great Shiraz wines such as Hermitage or Australia’s Grange also work wonders with hard cheeses – the match of tannin and saltiness can be critical. As ever, bringing together local cheeses and local wines is often a recipe for success. For instance, an aged Manchego pairs very well with a Rioja Reserva!

Many a cheese connoisseur’s favorite, blue cheeses are made in a way that sounds very unappealing to many. Essentially, the cheese benefits from the addition of cultures of mold added, the result being a veined cheese with distinctly blue mold running through the final product. But trust us, the last cheese is delicious – Roquefort is noted for its distinctly sharp, salty taste and pungent aroma. Stilton is another classic blue cheese, served at Christmas with the same certainty as mince pies and Christmas pudding. Lesser known but spectacular blue cheeses made in Spain include Cabrales and smoked Gamoneu, both from Asturias.

But what to pair with these distinctly flavored cheeses? Tradition and convention play a large role here: Roquefort is widely credited with being the ideal foil for Sauternes, a sweet wine style from Bordeaux. And yes, it does really work! It is the sweetness of Sauternes, especially older examples, which really complements the saltiness. Another classic pairing is Stilton and port. We tend to favor older tawnies in this regard; like Stilton, we find prefer more oxidative and less fruit-driven port wine styles.

However, there are options further afield if you’re a stickler for experimentation. Spain and Portugal offer rich rewards; powerfully flavored old oloroso, amontillado, Madeira, and other fortified wines work very well with blue cheeses. Sommeliers have even been known to pair sweet Riesling or Tokaj, for example. In Northern Spain, Cabrales is classically paired with natural cider. But, as ever, the choice is ultimately yours.